The dead give-away straight away is the huge mouth and large pectoral fins, almost resembling the shape of a table-tennis bat! The cavernous mouth is lined with teeth, and famously, the anterior ray is shaped like a small rod, equipped with a worm like attractor to fool un-wary prey. The base of the pectoral fins are fleshy and the skin is well camouflaged, usually varied mottled tones and hues of brown to blend in with the natural environment.

There are fleshy protrusions, especially around the mouth-parts that aid the camouflage effect. Most specimens encountered are small, usually a pound or so in weight, although they can grow to well over one hundred pounds. There is a smaller species (Lophius budegassa) that may be encountered in Irish waters. 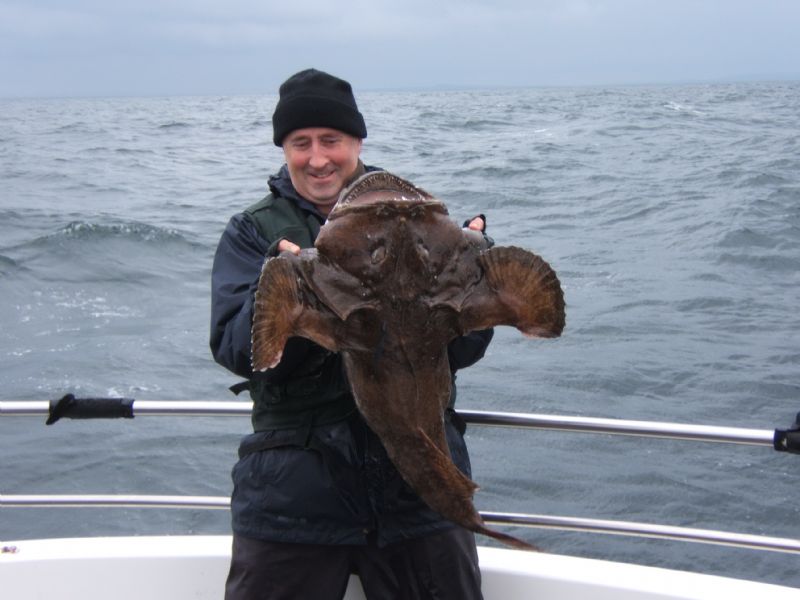 Aboard Luke Aston's charter boat out of Carrigaholt

Angler Fish are present around most of the Irish coast, but tend to favour mud-sand sea beds. The only Angler Fish I ever caught was adjacent to Portmuck on the Belfast-Larne coastline. Caught by accident, I am quite sure it was over a mud-sand habitat, and no coincidence that it was not too far away from where Sean Neill claimed the record back in 1985.

As with most Irish saltwater species, they can be caught most of the year, but safe to say, a bit of a rarity. Peak times are early summer through to autumn. 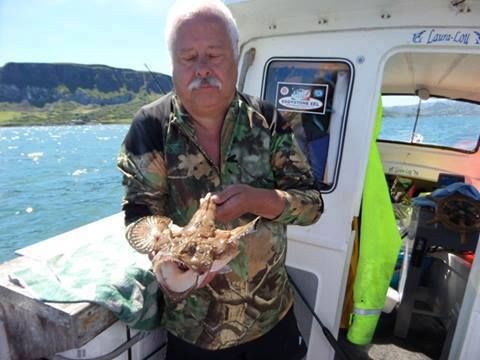 Everyone knows how an Angler fish feeds! It famously waggles a little attractor lure, fooling un-wary prey into close range, then "snap", the happless bait-fish is engulfed into the cavernous mouth and promptly swallowed!

Angler Fish are taken by fishing "hard" on the sea-bed. They are a bottom-dwelling ambush predator. Almost always a by-catch, some are taken on baited feathers, others on baited spoon-rigs. Some large specimens have fallen to pirks or baited pirks "bounced" or "jigged" on the sea-bed when targeting Cod. It is fair to say that anglers rarely, if ever strictly target this species, and usually considered quite a novelty catch.