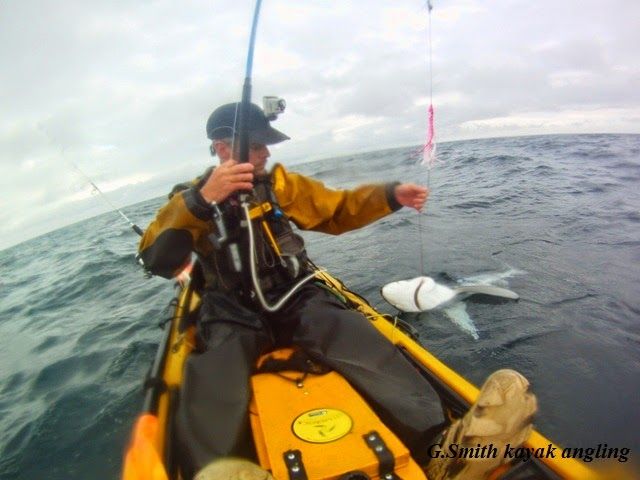 Blue shark from a kayak.

Well this one is all about a very special trip that finally went ahead after many attempts to get it done.

It started back last year when I tried to book a charter to take us out to the Blue Sharks, most said they would but then back tracked due to safety etc.

But we are big enough to take responsibility for our own actions and I continued to try and get one booked, with not much luck.

However, last summer I met James Leahy, and dspite being new to kayak angling, was mad to give it a go. It is common for people to say they want to fish shark from a kayak but not many will really try. But this year was different with a good head of Tope about to test the lads and gain some more experience. I was confident of getting a good crew together for the challenge.

Would it ever happen?

A plan was hatched to get as many numbers as possible out together. But again on the Wednesday before we where to go out, the boat skipper rang to cancel due to unforeseen events. I was very disappointed, but James had an ace up his sleeve that I knew nothing about. He had been talking to one of Corks finest shark anglers Kieran Ring and he was actually keen to see Blue Shark caught from a kayak. I was a bit taken aback and I still had my doubts if it would happen.  The plans where made and myself, James and Kieran met in Youghal County Cork.

We finally met Kieran, a very decent man and told us to load our gear as he had to nip back for something. Well myself and James where loading away at the kayaks on to Kieran's warrior style boat and I asked James if he knew we were bringing kayaks.  James said I hope so . I was expecting Kieran to come back and shout "get that lot off my boat" but thankfully he didn't! With kayaks loaded, we waited for Kieran to return, and there wasn't much room left for any of us, but he never batted an eye lid and said as long as she gets up on the plane we are laughing.

Engine started and off we went, the engine revs getting higher and higher, would she plane I wondered. What do you know she did, no bother to her. We where skipping across the chop at an impressive rate, and covering the 15miles in reasonable time. First stop was for fresh bait which we found plenty and with enough to do the day, and massive expectation, we ventured on.

On the shark grounds.

The engine slowed and the excitement rose as it was time to launch the kayaks. I was busting to get out, Mackerel "chummed" and baits readied we where set for action. I was first on the water, soon followed by James.  I lowered my bait and sent my balloon out to wait for some action.

We sat there and Kieran offered not to put a line in at all, to give us a chance but we couldn't do that and so, he put a line out very close to the boat. We where out about 40yards in the chum slick waiting for something to happen.

Forty minutes passed and not a sniff, that was until Kieran's bait got a take. A half hearted take resulted in a miss and soon after another miss for Kieran. He said it must be a small shark. Small or not I was on the edge of my seat with the excitement.

About 10 minutes later, my line got a pluck, then another and after seeing how he hit Kieran's I let him have a good go, until the balloon started to go down. With 2 or 3 good strikes the hook was set and great fight ensued. We new it wasn't a monster but it was the first blue from a kayak in Ireland or the Uk that we new of, so it was a special fish what-ever the size. 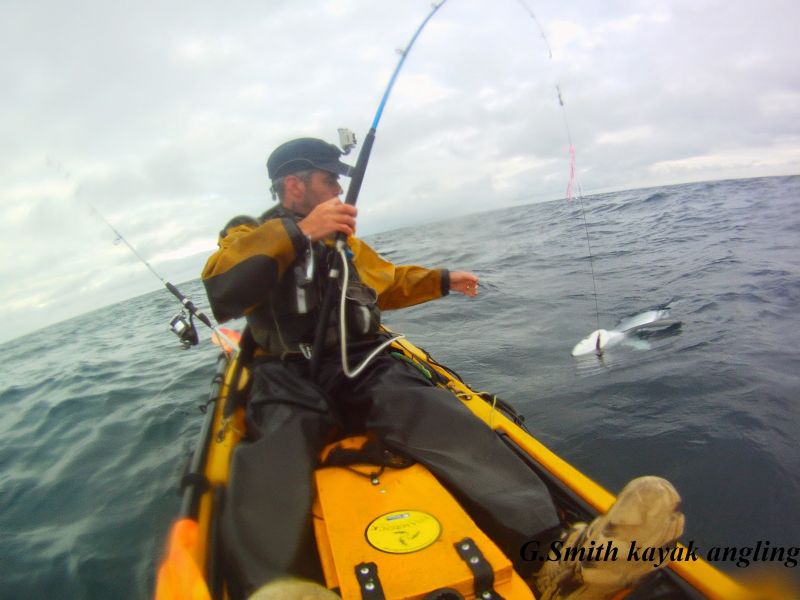 The fight was like that of a smart mullet, he let me get him close several times and when you think you have him beat he would scream off in a powerful run. I was having the time of my life. 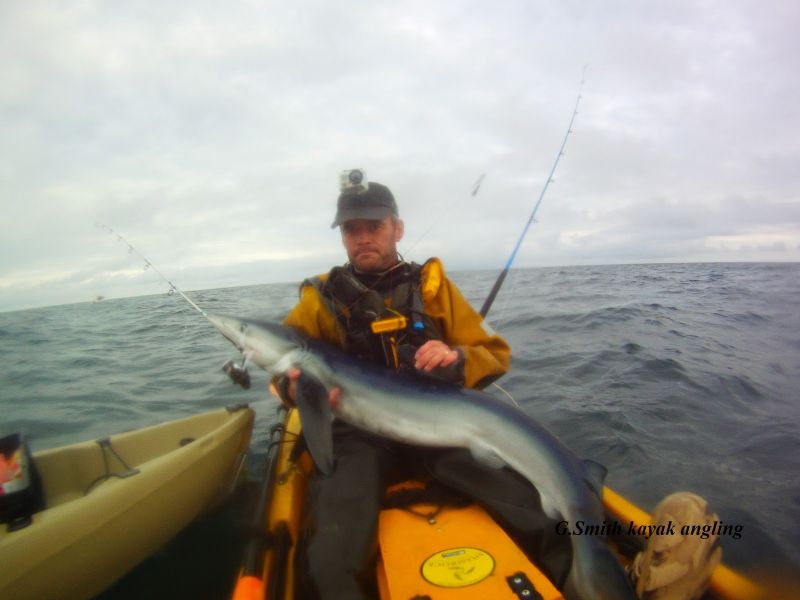 Blue shark in and photo I was over the moon it was around 35lb to 40lb, I couldn't thank Kieran and James enough.

Things went quiet for the next few hours and James' chances of a shark where fading, but we don't give up easy. About 9pm we where sitting there and Kieran said this is the last bag lads (mashed Mackerel) make the most of it. Approximately twenty minutes later Jame's rod took off and I mean took off! Reel screaming and James screaming with delight. It was a dam good fish, but it wasn't to be. As the shark ripped off line, the pressure sank the braid into the reel and jammed it, and as James tried to free it the shark found a small bit of slack line and headed for the horizon. With that his 40lb braid snapped like thread. Oh, it was a killer to see him lose what may have been his only chance for a shark on this trip. But Kieran said rig up again I'll stay until dark. No sooner had Kieran said that than he took a hit close to the boat. What do you know, a small Porbeagle for Kieran, a shark species he has been after for years! 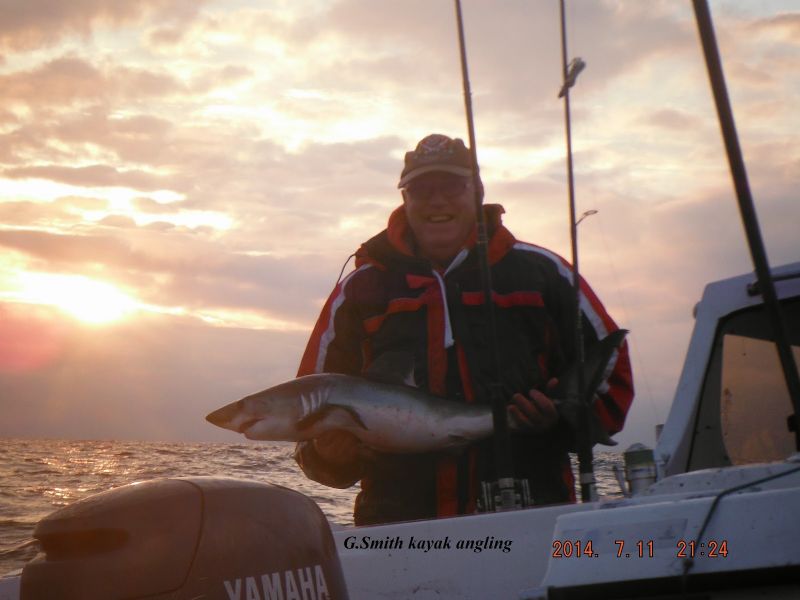 Kieran is delighted with his first Porbeagle

No sooner had Kieran released his Porbeagle, I was thinking should I change my bait? But no need as I just took a small hit, then again, something along the lines of a Pike gently taking a bait, and in no hurry. As the balloon started to head away I again struck hard 3 times and the shark answered with a powerfull run, and run and run. There was no stopping her as she poured line off the reel. I upped and upped the drag until she was pulling me every-where! By this time James had re-rigged and was fishing again.  Very soon after he was also into a good shark. So picture two lads being towed around the place by good sharks with no land for at least 15miles and both of us quoating various lines from jaws, including the one "we need a bigger boat". 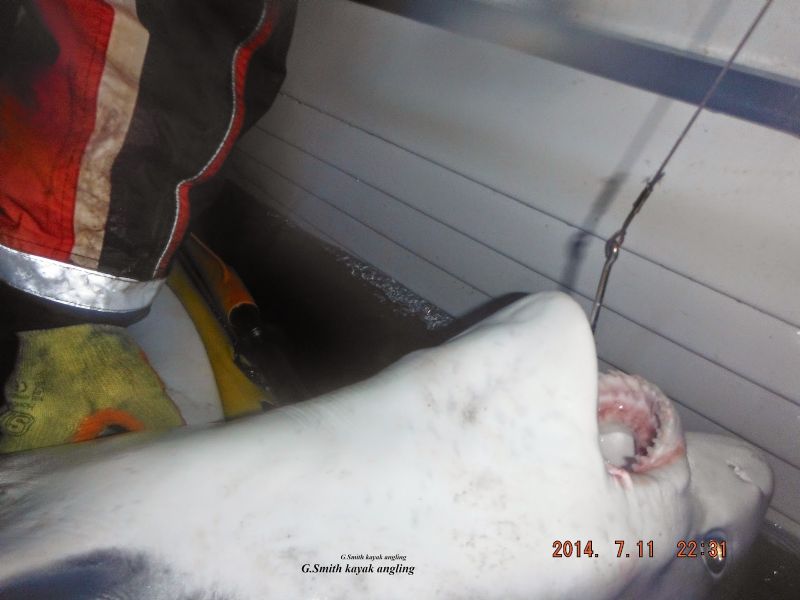 10.10pm James fought his fish for around 30 mins and finally brought it to the kayak, weight estimated around 80lb to 90lb.

Eventually after an epic fight lasting over an hour,  up she came and the most fantastic shape of a shark appeared below my kayak. As it was almost dark by this stage, I could see the massive white belly coming towards me, head shaking and rolling all the while. 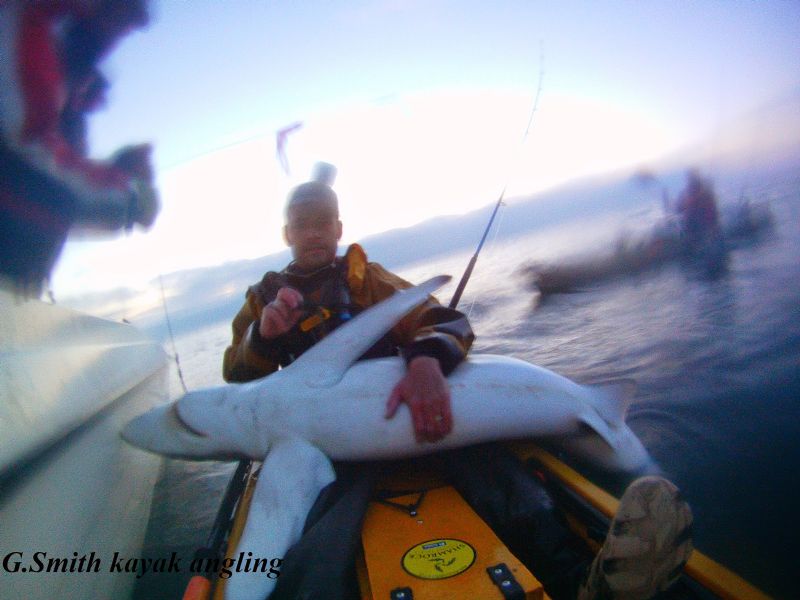 I was busting to get it on my lap for a trophy pic but was wondering how the hell that was going to happen. I got the wire trace in my hand pulled the beauty onto my lap as much as I could, but I couldn't get it on all the way! I shouted to James if he held the wire I could grab its pectoral fins and haul her up, but James reckoned Kieran could get a better hold. I couldn't blame him, she had a mighty set of teeth. Thankfully Kieran came over and helped me to slide the shark onto my lap for a photo-shot and finally into the boat for an accurate measurement. 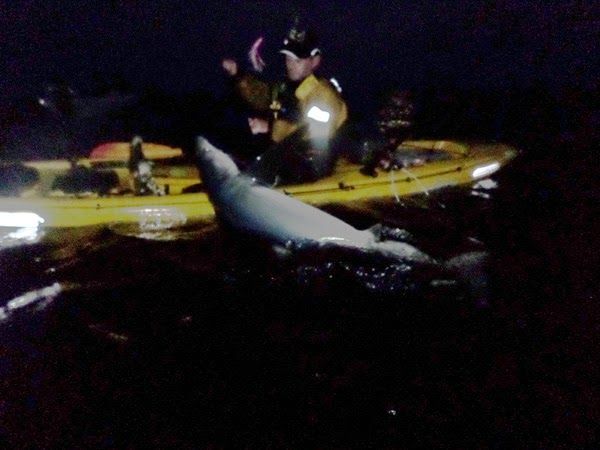 At first we believed she came in at 133lb but a re-do of the calculations seems she was 99.7lb. To me a monster and I was over-joyed to say the least. Very soon after she was returned to the water, just before she nearly rolled me over, as there was a lot of weight on one side of the kayak! Off she swam, strong and healthy and that was the end of our epic journey.

I would like to say a massive thank you to James Leahy and Kieran Ring, as without them our fantastic adventure would not have happened.

Check out the video footage here