Common Skate from a kayak!

We got a good one!

Hi all.
Yes you read that right, following on from our last success of landing a common skate of 37lb there was nothing else for it but to do it all again.
Well the weather  forecast finally settled down and myself and some of the lads decided to hit the skate mark near Malin head. Plans where made and the final head count was Mike Henry, Brendan Moyna and myself.

The launch
The three of us met up near Malin and got ourselves on the water as soon as we could. It was a late start and 1pm was the earliest we could get out what with work and travel.
I was first pushing out, and the initial calmness of our launch point was soon gone once we cleared the shelter of the bay. It was rather lumpy to say the least with the wind and swell running against the tide so we got battered from all sides.

Anchors away
I didn't bother messing about with finding fresh bait as myself and my son Craig had caught a bucket full the day before. But I did drop a set of Euro Champs on a mark of fish, the first drop I got a good fish on and lost it half way up but as soon as my gear went down again, BANG another hit and he was a good scrapper. To my surprise it was a nice codling. Very rare for this spot and only my second this year from this venue. We all paddled out and it was clear that the weather was considerably worse than expected. So much so that we stopped short of our intended mark. Anchors down and myself and Mike anchored about 200yards apart and began to fish. I had forgotten my Scad so all I could do was to double up some mackerel and try that. I fished away for about one and a half hours catching small stuff.  The skate rod got a bit of a take and a short run, but then nothing. I waited for about ten minutes but nothing happened. I reeled up and the bait was in perfect nick so he may have been eating the chum bag.
I decided to go big on the bait and from recent advice from quiet a few skate anglers and friends I put on a large dogfish for bait. I cut it in half at the lower end of the gut section and just hooked it in the nose.
Down it went and the adrenaline was flying at this stage, but in the back of my mind I was convincing myself that it was a lobster at the bait or possibly a bullhuss.

The weather worsened
By this stage the weather was really making things uncomfortable. We had a reasonable tide running west with a NW wind with a dirty sharp lump coming from the NW. All this meant we where getting a good battering, so much so that Mike called it a day and began to head in. Myself and Brendan where for staying out.  But no sooner had he let go of his anchor and started paddling ashore my rod started to go.

FISH ON! GET THE CAMERA
Although my rod was going, it was quiet a gentle take, nothing mad or screaming runs. I lifted the rod and wound down on her and lifted as hard as I could. I felt a short bit of movement and some shifting about, but then nothing but solid-ness. I heaved and heaved for about 10 full minutes and she didn't budge an inch. I was making so little progress that I was thinking I was just stuck on the sea-bed.
"Damn it" I thought and mulled over my options. I eased up on the pressure but not inch did she move. I got the line in my hand to get a better idea of what was happening and heaved but the gear was solid and now thought I really was stuck fast. That was until she had enough of being heaved and started to shift,  and she could shift! 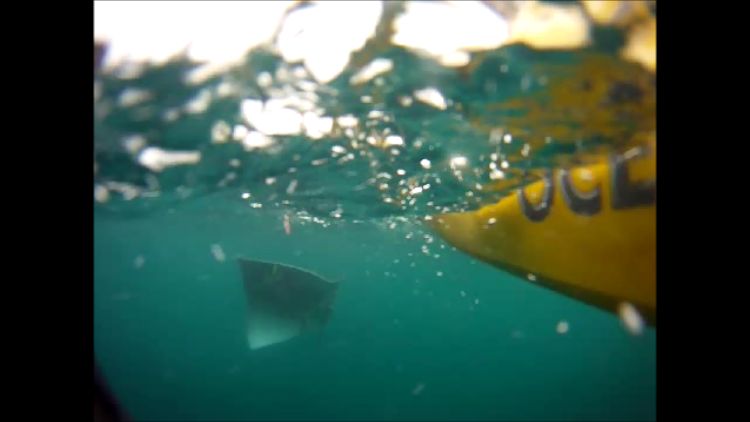 The Skate nearing my Kayak
The battle
Yes there's no other description for it, it was a battle. I heaved some line up and she would just pour it back off. It was mental. I was delighted to have her peel the line off the reel but the effort to get every last yard back on the reel was a killer.
I was using a 50lb class rod and it was bent like it was light fly rod. By now the weather really wasn't helping with the tide holding me side on to the swell and fighting the skate from the side, it was tough going.
Thankfully half way up I got the kayak into the wind and it became easier. I had more stability and gave her all I had, Oh it was great craic. I'd get some line in and she'd take some line back, all the way up to the surface. 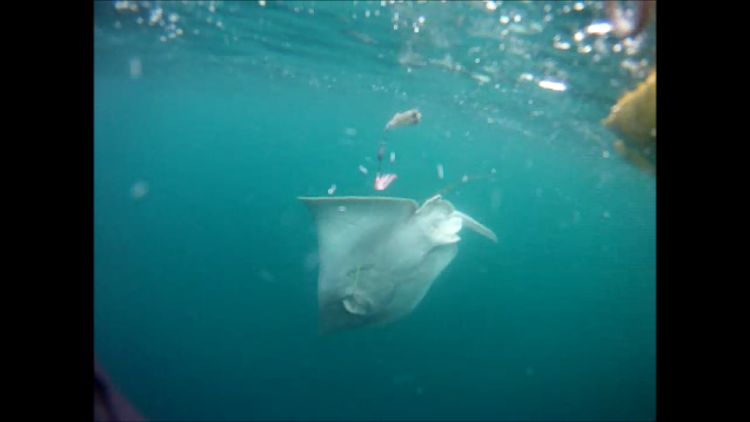 And back down again!
Up she came.
My leader appeared and I shouted to Brendan that she was coming up and over he came.
The anticipation was serious, with every foot of leader I was trying to catch a glimpse of her in case the gear gave up under the pressure. First a flash of white and then what looked like a sitting room carpet appearing on the top of the water with those black eyes popping up like a crocodile.
It was a fantastic sight only for her to turn and dive like a submarine, but thankfully only a short dive.
I got her back up again and I grabbed the hook trace and held tight. At this stage I was wrecked and Brendan was laughing his head off at me. You'd think I ran a marathon! 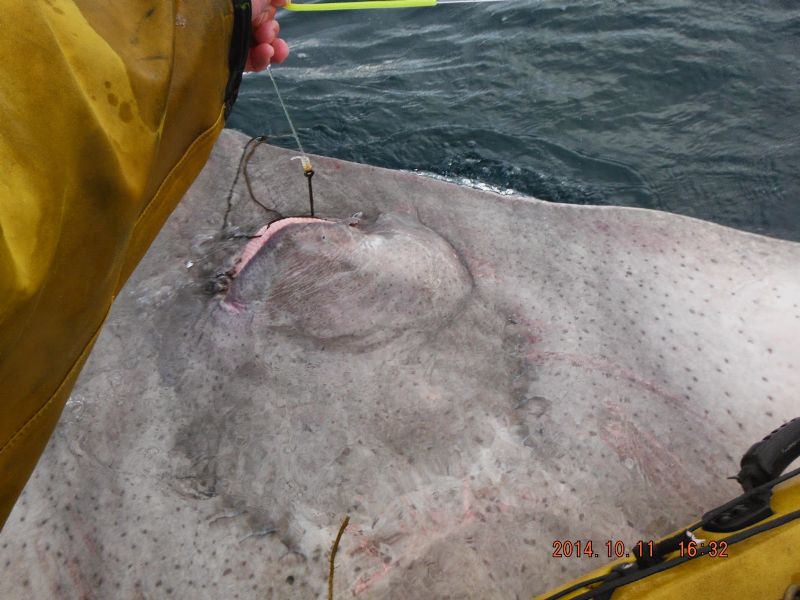 Eventually onto the kayak
No time to rest.
You'd think it was over now, trace in hand and a big skate with nose poking up from under the kayak.
She was massive, but I wanted to get at the very least a wing span measurement to have a rough idea of weight, but with the tide constantly pushing her under the kayak it was very tough going to turn her over. This was as far as I could get the skate up on my own.
So Brendan came along the lower side of my kayak and the plan was he would heave the trace and I'd haul the skate itself. 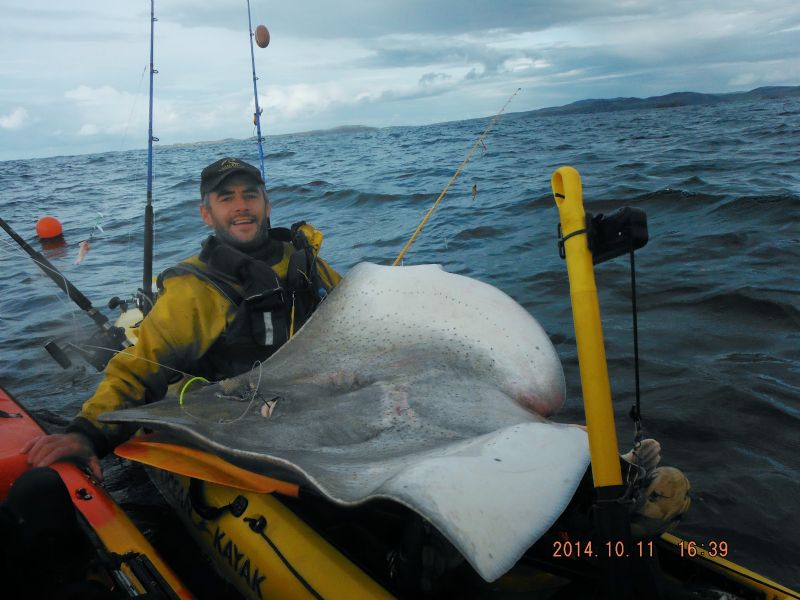 Job done. A tight squeeze but safely aboard for the trophy shot
Damn she was heavy but we heaved together and up she came. She actually sunk the kayak down on its side as she came in. What a sight! She was immense, really heavy and was squashing my legs! I got the tape out and could only manage a wing span measurement which came in at 142cm.
We went mid range on the possible weights and ended up with a weight of 130lb. A chat with the lads that catch them all the time reckon she was comfortably 130lb so I was over the moon even more, if that was possible. What a day it was unforgettable and to top it off I managed another codling on the way in. 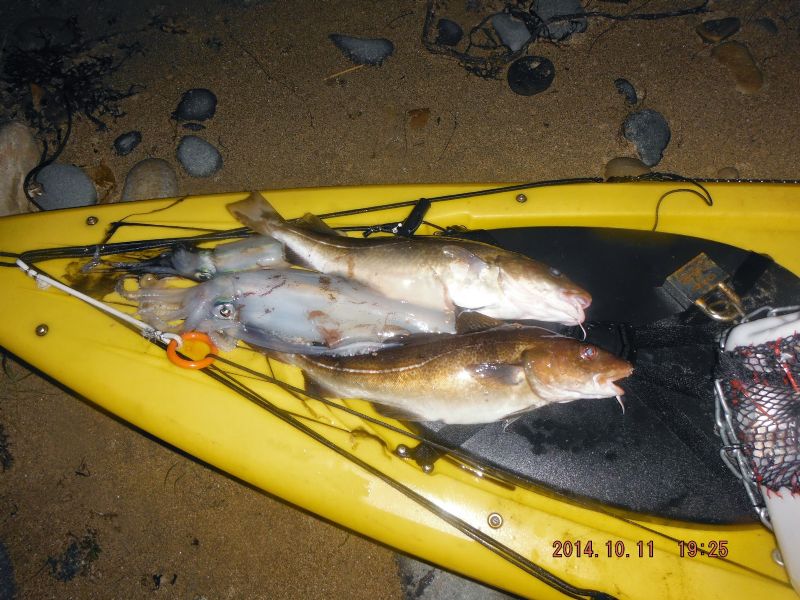 So that was day one, and day two didn't let us down. There was another skate caught, not by me but by Mike Henry. Unfortunately Brendan had to head home so it was just Mike and myself out on Sunday.  It was Mike's turn for a skate and after the fish nudging and pulling his bait for half the day it eventually took the bait and Mike was into another nice skate. She put up a good scrap and between the two of us we got it on to Mike's kayak for a trophy shot. She was estimated at 60lb to 70lb. Very well done Mike cracking fish. 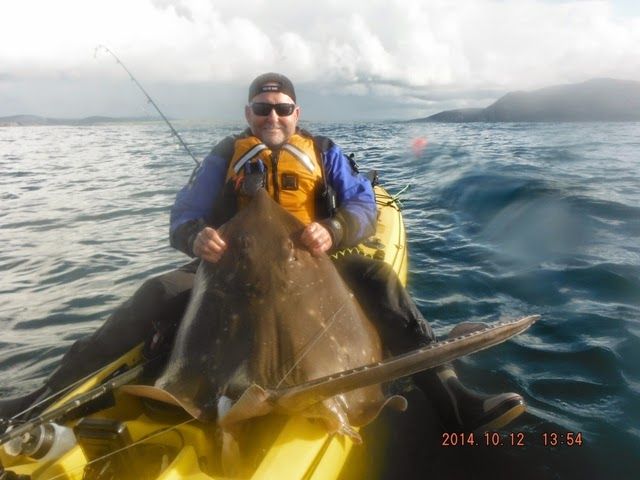 Not to be outdone, Mike Henry bags a beast too
What a way to end a week end. Absolutely brilliant. So until next time, tight lines.
Back