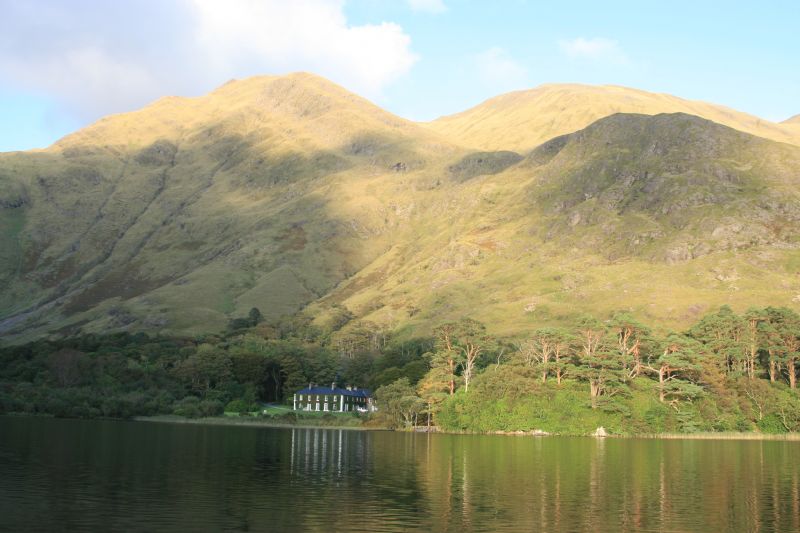 We live in a world that is continually changing. However when change touches us we always seem surprised.

My fishing sits in a bit of a rut – but one that I am perfectly happy with. I tend to fish the same fisheries each year at the same time.

However though everything else appears to be in continual change I do not expect the fisheries to – which of course they do.

The biggest change of recent times has been that of Jane and Peter Mantle moving on from Delphi after running the house and fishery for the past 25 years. Peter for many people has become synonymous with Delphi and as such the place will not feel the same.

Delphi lodge has however throughout its history seen many changes, it was originally built as the sporting estate of the Marquis of Sligo in the 1830’s. It has a long and distinguished history as a fishery. Being fished by many of the angling greats and written about by the likes of Kingsmill – Moore. In the 1980’s the lodge was restored and rejuvenated by Jane and Peter Mantle.  Renowned as a Sea trout fishery, after the crash in sea trout stocks in the early 1990’s it has had to rely on salmon. The wild salmon stocks were bolstered by the introduction of ranched fish by Peter and his team. 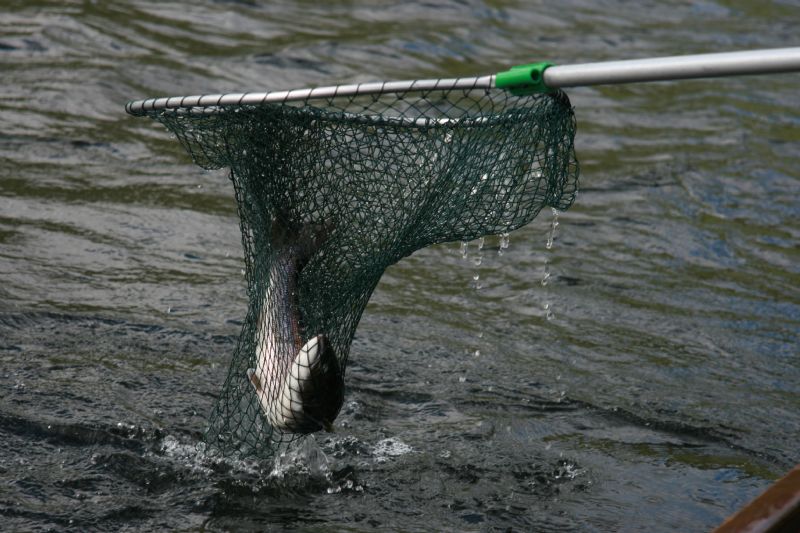 One in the net!

Delphi lodge sits at the base of Ben Creggan (693m) overlooking Finlough - an extraordinarily beautiful and atmospheric location. The fishery starts in the mountains with Lough Cunnell and Glencullin Lough. Downstream are the two main salmon loughs, Doo and Fin (both very different in character) and these are linked to the sea by the rocky little Bundorragha River. 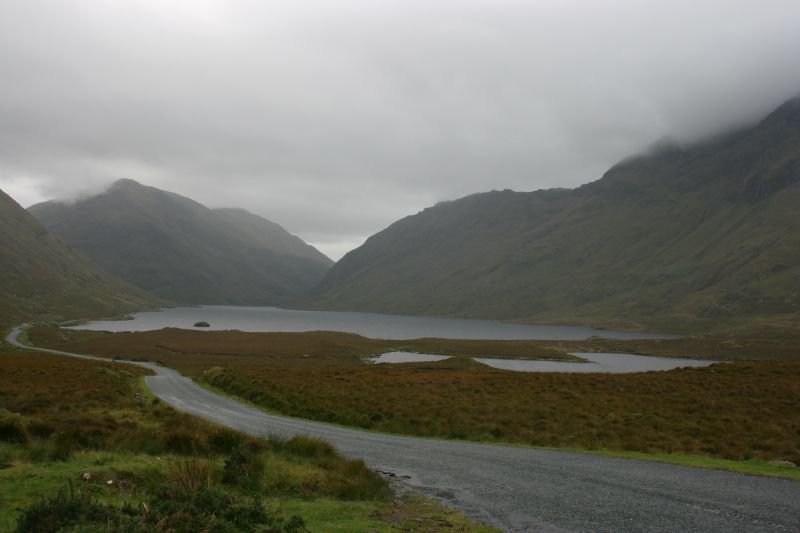 Salmon enter the Delphi system from the start of the season (opening day 1st of February). ‘Springer’s’ are usually in the 8 – 12lb class. The smaller and more agile Grilse start to appear in June, Sea trout in July and summer salmon from then on (as ever, dependant on water).

Delphi Salmon are divided into ‘Wild’ and ‘Ranched.’ Ranched fish are a product of the Delphi hatchery and all have their adipose fin clipped. If one catches a ranched fish it must be retained, whilst all ‘wild’ fish must be returned.

It is 10 years since I first visited ‘Delphi.’ That first visit was early one cold frosty March day. Getting tackled up in the car park David (the fishery manager) politely but pointedly told me to put away the fast sinking line and 2 inch tube flies I was tackling up with. He recommended a floating line and small shrimp patterns – very different to how I would normally approach Scottish salmon in early spring!

This first taste of Delphi was unsuccessful on the fishing front though I did see fish. However I was taken by the barren isolation and beauty of the place. When lucky enough to be subsequently invited again I was quick to take up the offer. The main loughs and river are fished in rotation. Each piece of water has a differing character requiring subtle changes of approach and method. 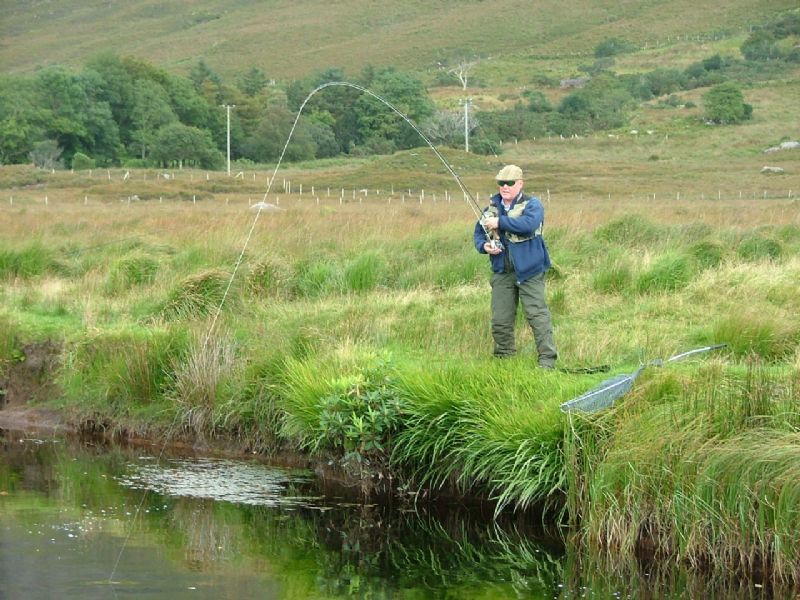 Working down the fishery.

Lough Cunnell - this lough is at the top of the system in the ‘hills.’ Those who have put in the effort to get to it tell me it is a ‘good walk.’ Beyond the reach of migratory species it holds a healthy stock of ½ lb trout that respond favourably to most flies and patterns. I should go and fish it at some stage but I must admit to being slightly put off because I have been told it holds more than its fair share of midges.

Glencullin – this is as far as the most adventurous sea trout and salmon can go. Generally only fished from July to the end of the season this small and very picturesque lough in times past had an excellent reputation for sea trout. Unfortunately due to the recent scarcity of sea trout it has been lightly fished for a few years now. I have only fished it a couple of times and two years ago in  September my boat partner and I took 10 Sea trout up to 2lbs one very bright afternoon.

A floating line with traditional sea trout patterns such as the Clan Chief, Connemara Black, Donegal Blue and of course the Delphi work well here as does dapping. 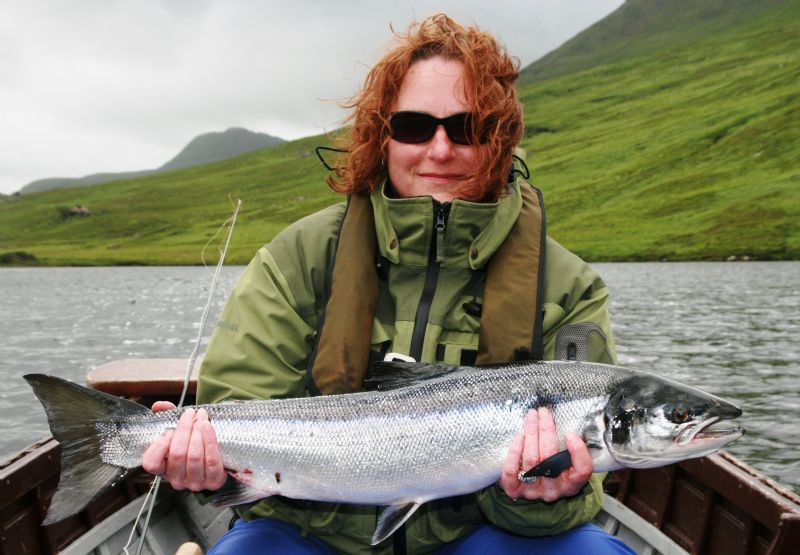 Doo lough is separated from Glencullin by a few hundred metres of stream. Doo lough is in the shadow of Mweelrea (Connaught’s highest mountain) to the west, Ben Gorm to the south and Sheeffry to the west. Though 3 km long, the lough is narrow (only 600 wide) and deep (it plunges to 70m). It has an unfair reputation as a dour lough. Like Glencullin in times past it was a sea trout lough of great repute. Though over the last couple of seasons it has seen suggestions of resurgence in the sea trout in both number and size (sea trout of 8 and 12 lbs have been taken).

Sea trout can be caught all along its shores but the best salmon areas are undoubtedly were the river runs out. Dapping is popular, with the belief that the bigger fish are always taken on the ‘dap.’

Fin Lough – is an intimate lough overlooked by Delphi lodge. Only 800m long and 300 wide this is journeys end for the ranched fish. As such it has salmon from opening day and the numbers of fish that can be seen swimming in its clear waters in September can be mind boggling (as well as frustrating when they ignore all put in front of them). The majority fish wet fly here using floating or intermediate lines. It was here that I first ever came across the successful use of the ‘Collie dog’ on a lough. Grilse in particular will come up and chase the collie through the waves. 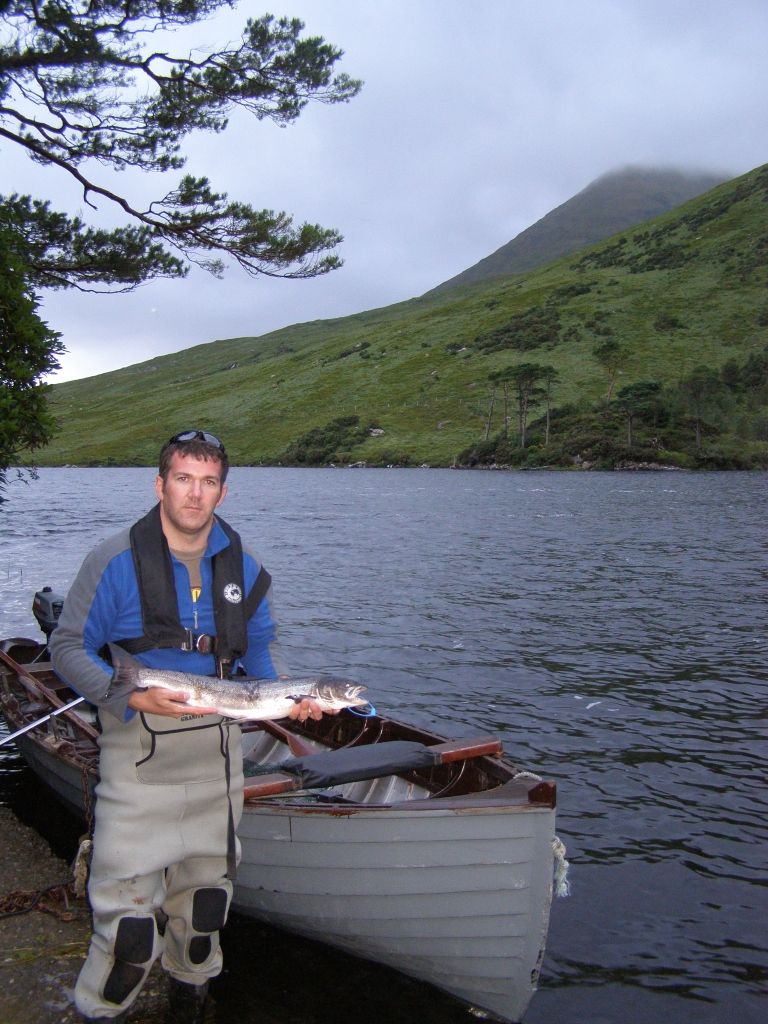 A fish off Lough Finn

Bundorragha River – flows out of Fin. The river joins the system to the sea in the Killary harbour. At only 2 km long it has over 20 named pools. These are a combination of natural and man made (some dating from the 1870’s).

Deep and narrow the river has excellent water clarity and can be easily covered with a single handed rod. Most anglers use a floating line and the standard salmon flies such as Collie dog, Cascade or shrimp patterns including the Apache, Curry’s red or Wilkinson. The river sets the angler challenges, with fast glides, deep pools and turbulent pots. Getting the fly to the fish is not always straight forward. Those who can think outside the usual boundaries of salmon fishing are often best rewarded.

I believe that the thinking angler catches more fish – well that is of course if they are thinking about fishing! Out-witting fish is hardly the peak of human evolution but extremely satisfying all the same. 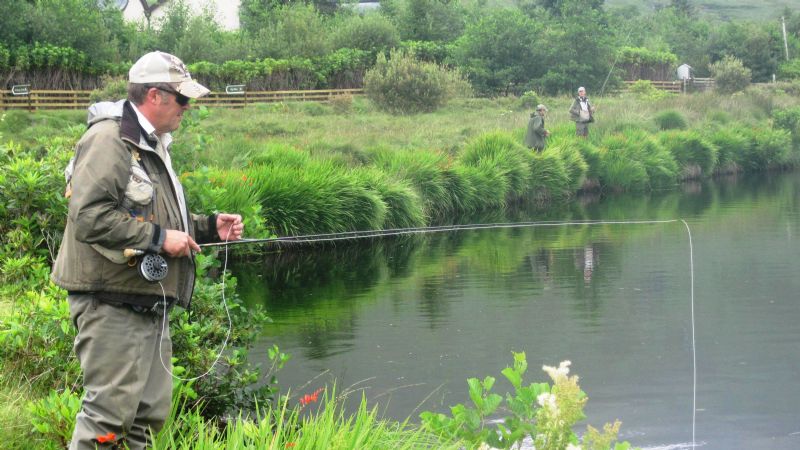 On one of my first ever visits to Delphi I was fishing down a pool with standard fair.  Single handed rod, floating line and a couple of small shrimp patterns on the dangerous end. Glancing down into the water by the bank I realised I could see a shoal of salmon lieing in about 8 ft of water. A salmon may come up nearly 8 ft to take a fly but I believe the easier an angler makes it for a salmon to grab the fly, the more likely the salmon is to oblige.

So I put on a gold head nymph and fished it ‘Czech nymph style.’ To my amazement a fish obliged and took the fly. I had discovered for myself that salmon will readily take a Gold Head Nymph bounced along the river bed. But no great surprises here as I was rediscovering what many other anglers already knew including the renowned British angler ‘Frank Sawyer’ who had written about it over half a centaury earlier.

To me however this was a revelation. On subsequent visits I started to experiment more with varying techniques to eventually find that stalking and fishing for individual fish was not only exciting and challenging but productive too.

The fly presented inches from the fish’s nose seemed to produce one of three responses.

However I also found that with careful persistence one could by ‘working the fly’ in front of the fish, force a fish that at first appeared to be uninterested to take it. I am not sure if this is an aggressive response but the result is the same. A fish that had been ‘worked on’ often takes the fly in both a savage and fast way. 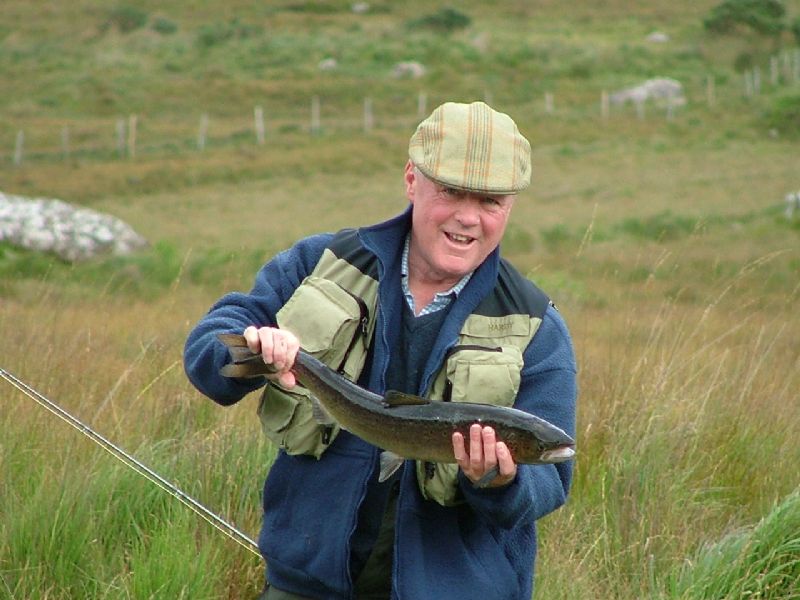 To aid this I developed amongst others an Orange prawn fly specifically to use this way. It is heavily weighted to get down to the fish quickly as well as nice and bright so I can see it, to guide in on my intended victim.

Of course as is often said there is more to fishing than simply catching fish (but catching fish helps!). The lodge, the setting and the staff all combine to make Delphi a superb Irish fishery. It is one of the fisheries were one can hand on heart declare I would enjoy being there, fish or no fish.