In search of Big Bold Ballans

Summer has arrived at last, and the sea is showing signs of warming. The shore angler can now enjoy the benefits of this rise in temperature as many Irish species begin to move inshore, and importantly, within casting range.

One of the most prolific and obliging of these species is the Ballan Wrasse. They can be found around the entire Irish coastline at this time of year, and provide the potential for superb sport, not only to the experienced shore angler but also for beginners.

Once hooked, the power of a Ballan Wrasse can be heart stopping, especially a fish in excess of three pounds. Using their large tail fin to maximum effect makes the first run for cover almost un-stoppable, but stop it you must, or run the risk of losing the fish amongst kelp fronds and rocky gullies.
The diversity of colour and camouflage is amazing, with no two fish being identical. These colours range from dull browns and olives that would usually denote a female, through to the males’ bewildering array of bright and mottled hues that often stand out rather than blend in with the surroundings.

Wrasse are designed by nature to inhabit reefs, kelp beds and similar un-hospitable areas, where tidal currents and wave action will dislodge food items such as shellfish and crustaceans. They are able to cope with these dangerous areas due to the tough, armour plating of scales and solid body density that can withstand reasonably heavy impact. The powerful tail fin can easily deal with strong currents, as any wrasse angler will testify, and the fins are equipped with protective spines to ward off predators. So, with this information in mind, when seeking Ballans, it makes sense to target rough ground marks close to shore that are at least twenty feet deep at low water. Around our Irish shores there are no shortages of in-shore reefs and massive beds of kelp weed, and it’s a certainty that this species is resident in most of them. 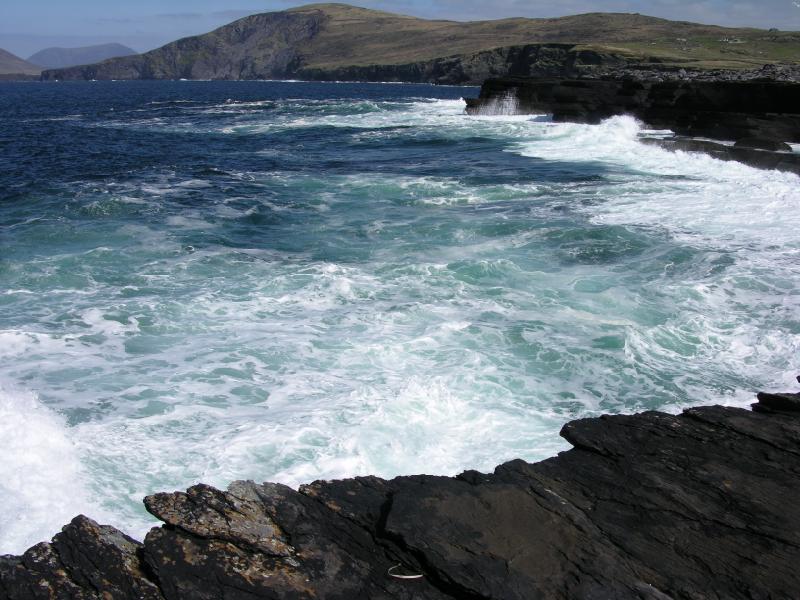 As with many Irish rock marks, Culoo at valentia is awe-inspiring, but exercise caution at all times.

Crustaceans such as crabs and prawns, along with shellfish, are the staple diet of Ballan Wrasse. Powerful jaws make short work of a crab’s armour, and the row of spine-like teeth are excellent tools to prise and scrape barnacles off the rock face. Seed mussels are a particular favourite, and larger Wrasse will often snap up the occasional sandeel or sprat that washes past in a strong tidal current. It is of no surprise that all these natural baits are superb as a hook bait, especially peeler crab, however, if you are looking for quantity rather than quality, ragworm has to be the number one favourite, they simply love the things! A pound of ragworm is usually enough for a Wrasse session. 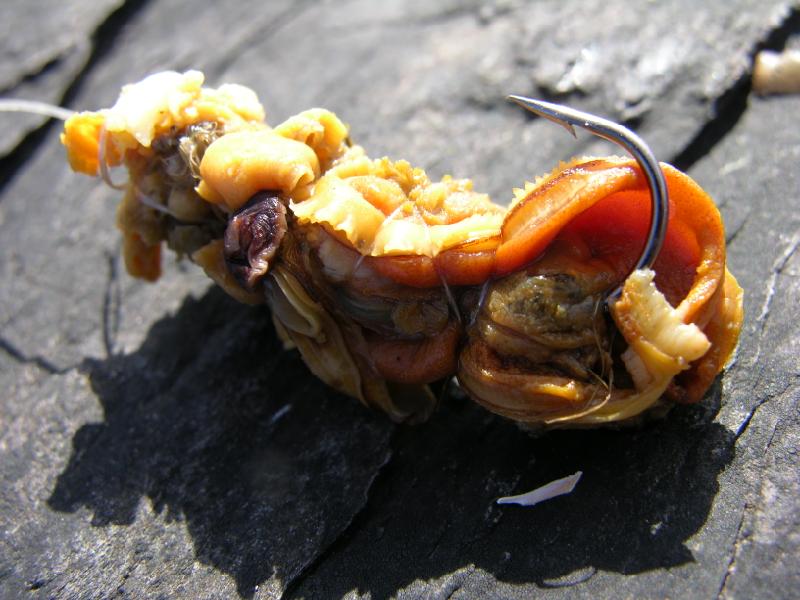 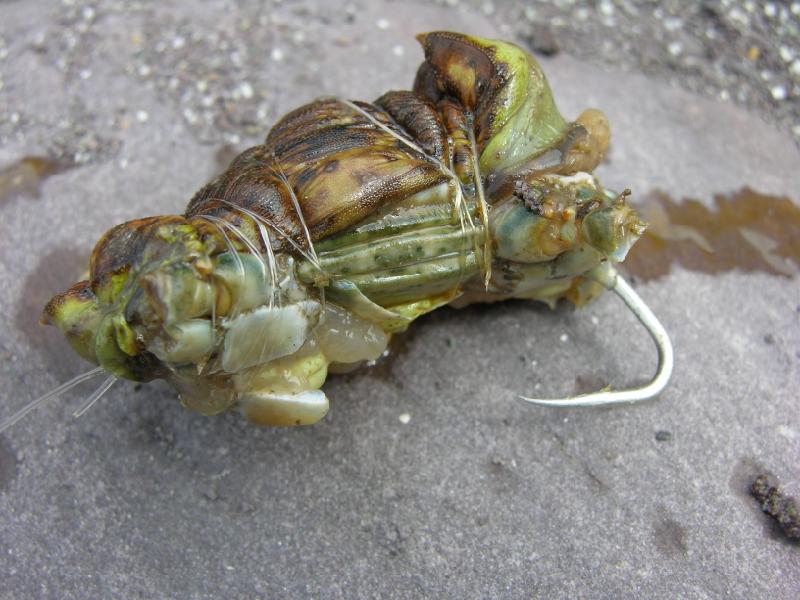 Although it will tempt the occasional large fish, rag will also account for a great deal of juveniles. To pick out the larger specimens, try a hard- back, green shore crab. Bites may be slower but once hooked, the powerful dives of a four pound plus fish will make the wait worthwhile. Peeler crab will also work very well, but whip it to the hook with elastic thread; Ballans are experts at stripping a hook in seconds. Plugs and spinners have accounted for many large fish and the challenge of Light Rock Fishing (LRF) using small artificials such as jelly worms and curly tails, lead-head style is becoming very popular. 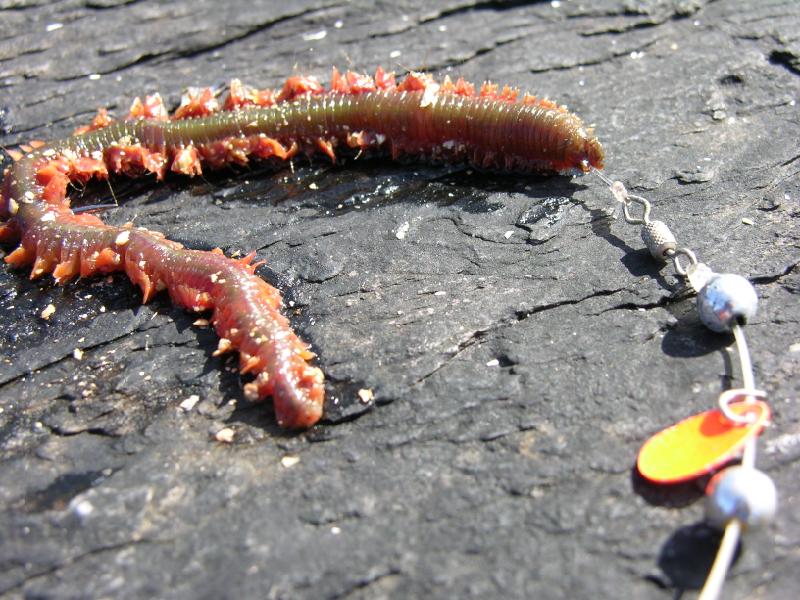 When choosing Wrasse tackle, choice is determined by the area to be fished. It is a fore-gone conclusion that the potential hot spot will be extremely “snaggy”, but weather and tidal strength may be a factor, along with the chosen method or approach. In general, a light beach caster set up is fine and will cope with almost any situation. However, a carp or pike rod with a two and a half pound test curve is a delight to use and will give a Wrasse the potential to demonstrate its power to the full. A rod of this type will double up as a float rod, should conditions dictate.
Standard bottom gear is a single hook paternoster, and should always be tied as un-complicated as possible. Chances are, quite a few rigs will be lost during a session so refrain from expensive link swivels and lead links, when a simple over-hand loop will suffice. 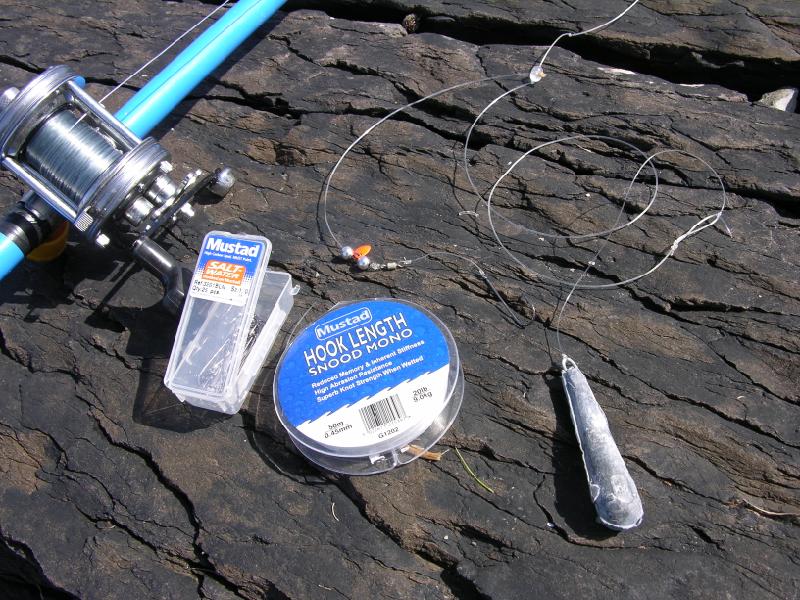 By making sure the hook snood is lighter than the main line, and incorporating a weak link between the lead weight and main trace, tackle losses will be kept to a minimum. Hook sizes range from 1/0 through to 4/0 depending on bait size, but strong patterns are required such as Kamasan or Mustad bln’s.
Float fishing is a visual and exciting way to target wrasse and can be a useful method if the area is simply too rough to bottom fish. A sliding float will be necessary, using a bead and sliding knot set at the required depth, with a drilled bullet weight to cock the float and provide casting weight. Ballans will usually indicate an interest with the float bobbing before burying out of sight. This is the cue to strike and keep the power on, preventing the wrasse from diving to the safety of the weed beds.

As with all rock marks, it cannot be over stated just how dangerous the sea can be. Treat all fishing adventures with the greatest of respect. Check weather conditions and dress accordingly. Inform someone of your plans for the day and when you are likely to return. Carry a means of communication and check the phone signal is strong in that area. Also carry enough food and drink and bring a companion along. Common sense goes a long way; if conditions look unsafe, postpone the trip or fish elsewhere.

For the purposes of obtaining photographs for this article, “big Phil” and myself took a trip to the Culoo Rock mark on Valentia Island, Kerry. We availed the services of our favourite guide and good friend, Kevin Brain, based in Waterville. Hiring a guide for a rock mark such as Culoo is extremely beneficial, not just from an angling point of view but also from the safety aspect. Culoo can be dangerous at times but an experienced guide will also take weather conditions, wind direction and tidal swell into consideration before making a decision on the venue.
We arranged to meet at the end of the long, winding lane that leads down to Culoo Rock. After a quick inspection, Kev gave us the thumbs up and we hastily gathered up our gear for the afternoon ahead. With a reasonably long walk, travelling light is essential for us old blokes, so it was one rod each and enough spare bits and pieces should we lose any tackle. 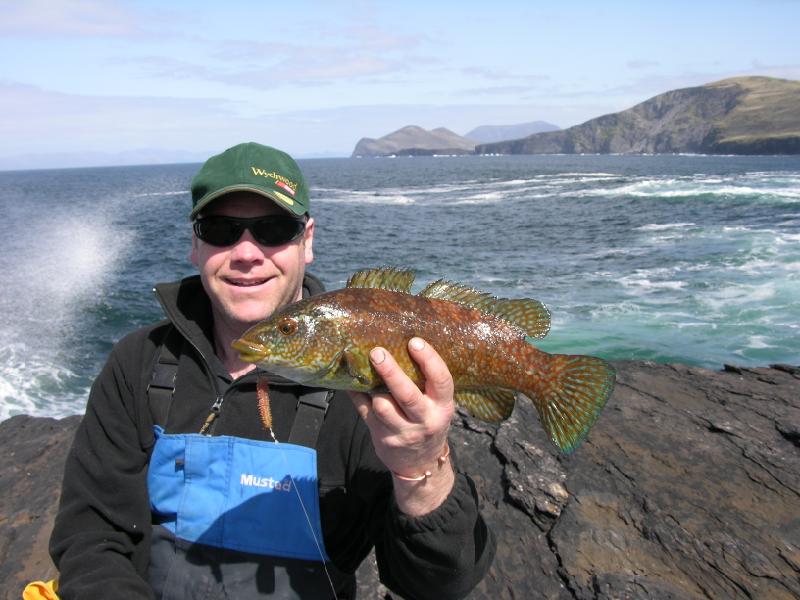 Arrival at the mark reveals a breath taking view that screams Wrasse and Pollack back at you. Rods were quickly set up with rigs attached and baited with ragworm. Kevin bet that we would have a bite within thirty seconds, and believe it or not, I had a wrasse hooked and diving for cover on the count of ten! What an amazing place. Phil soon had his first fish as they literally queued up to be caught. Ragworm is superb bait when it comes to a numbers game, but we were looking for a big one. Being an established bait supplier, Kevin had brought along some peeler crab, mussels and black lug to try, all well proven Wrasse baits. Mussel and lug were successful but on average, the crab baits sorted out the larger fish and it was not long before we had a three- pounder for the camera. This is not huge by Wrasse standards, but a decent example all the same and great fun on light shore tackle. At Culoo, Wrasse exceeding four pounds are reasonably commonplace. 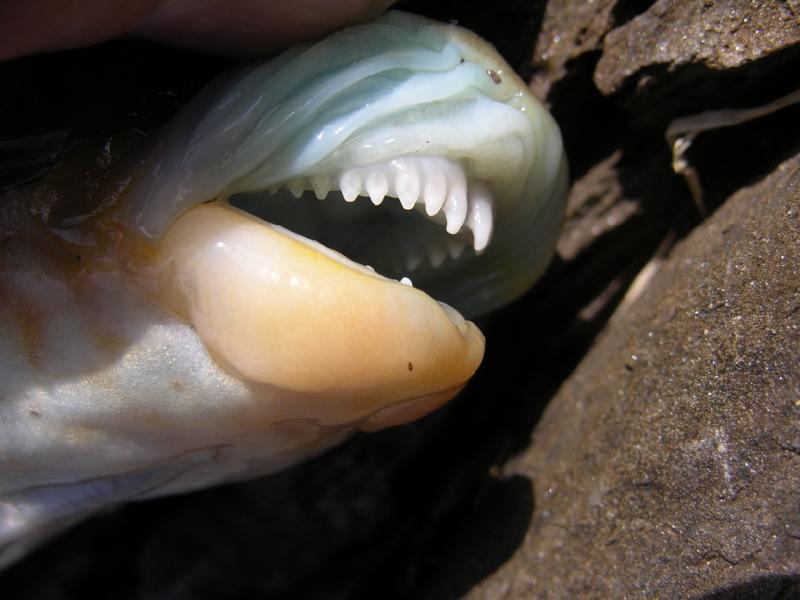 During this session, I had the opportunity to try out some two- way beads. I saw these used for the first time in the World Boat Angling Championships in Slovenia some years ago and they worked extremely well. I realised the possibility of using them in Ireland and they seemed just the job when targeting Wrasse.
They work in much the same way as a swivel trapped between beads and crimps to take a hook snood, but are streamlined and less inclined to “snag” on under water features. By using fifty pound breaking strain nylon, it is possible to trap the two- way bead between two, simple over hand knots, with a hook snood attached through the second hole. The bead is free to rotate on the main line, eliminating tangles.
I fished all morning with this trace and lost count of the Wrasse that were caught and returned, and only lost two hooks and three lead weights. The main trace remained in tact. I am sure these two- way beads would also serve well for Flounder on our storm beaches around the north coast. 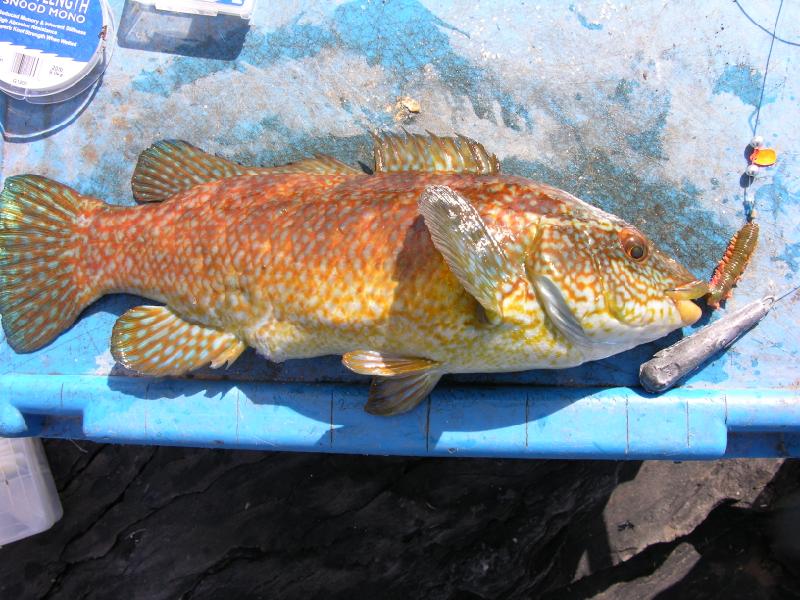 By lunch- time, bites slowed dramatically and soon stopped entirely. Predictably, it was not long before a seal popped up several yards from the mark to let us know why our swim had died, and with our quarry well and truly “spooked”, Kevin suggested it was time to quit and head back to his B&B for a cup of tea and a fry up. The beauty of fishing in and around Waterville is there is so much angling to choose from, we did not actually mind packing up, especially as Kev suggested taking us to his favourite Bass mark, but that’s a story for another day! 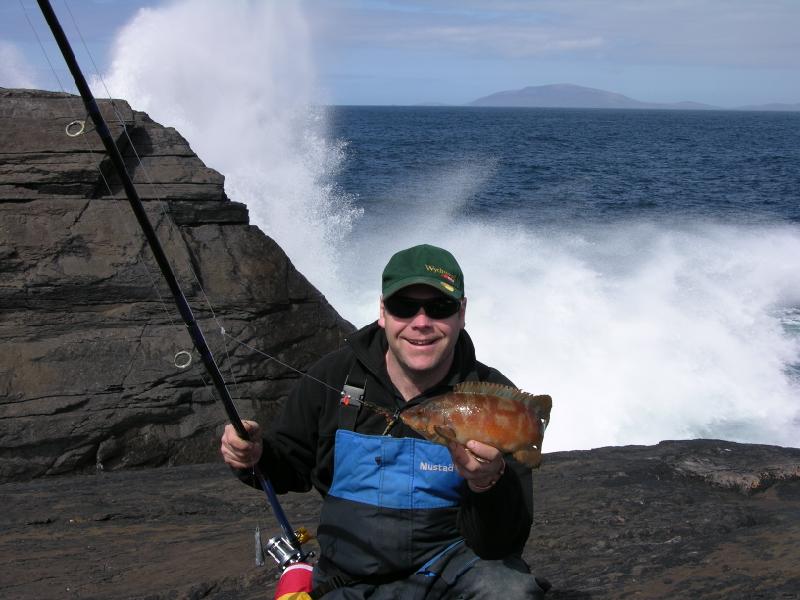