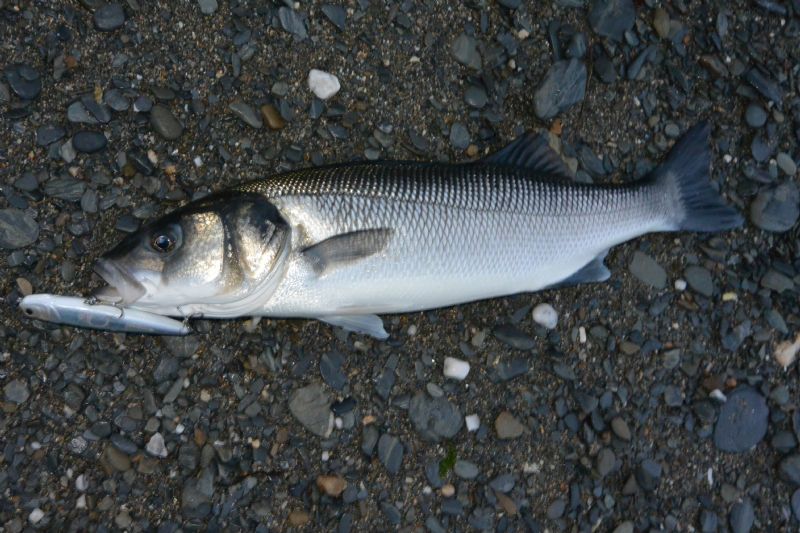 Where does this story start?  Well, I suppose it starts in the depths of Winter, those frosty evenings looking out the window in Kinsale, thinking……how many more sleeps until the bass return.

Those evenings we spend on fishing forums, perusing all the new sparkly stuff in the Shimano catalogue, trying to pass the time and sate the lust which is our obsession, the silver spikey predators.

In reality it is just a bluff, something to keep the imagination going and in places re -light memories of warm summer mornings as the sun appears over the Old Head of Kinsale. People like me are already perched on some solitary rock intently watching a small lure “walk the dog” over some kelp waiting for that eruption of water and a flash of silver, that moment the heart suddenly tightens and you know the season has begun…….the spikey ones have returned. This year has been slow for me especially, the odd fish appeared around mid-April but they were scarce.  I had seen these fish on various facets of social media but all they do is serve to torture me.  So a load more miles on the car, old spots, new spots, favourite spots, new lures, anticipation, cast, re-cast, imagine, dream, obsess, confuse and finally self-doubt  begins to creep in for another year.  This self-doubt wrecks my head every year; I think to myself “What has changed from last year? Am I doing something different, is it retrieve speed, is it the lure, is it the depth, is the water still too cold?  I mean……WHAT EXACTLY IS THE CRAIC?”

So, after numerous days like this I agreed to accompany a friend to one of “his” early season spots in East Cork.  Personally, I hate to travel, not cos I am lazy but just because I love fishing in West Cork, the scenery never fails to disappoint me. So off we set early doors and as we clambered down the cliff the silent telepathy said “This looks FISHY!”  So, we both have favourite go-to lures, his is a popular favourite amongst Irish Bass anglers, the Tackle-house Feed Shallow 128, a truly fantastic lure.  Now, don’t get me wrong, I love it too but I have always been a big fan of the Mister Joe 120 weighing in at 35gms, a bit of a heavyweight in comparison but if you make it dance right, it has caught me a lot of good fish. The "Feed-Shallow", a devestating and proven Bass lure

Out of the starting blocks we chuck out the lures, mine goes a lot further as I like to catch them at distance at this particular spot.  As I am half way in, my friends lure is nearing the edge and WALLOP he gets nailed, landing a feisty fish between 4-5lbs.  “Magic” I thought they are here! However, as ever, the very capricious Bass has other ideas and after throwing almost the entire arsenal of hard and soft plastic lures at them, my friends fish was the only taker.  I was genuinely happy for him as whatever size they are; Bass seem to have a specific ability to make us smile.  For me, I had the journey home doing the fishy post mortem of….”What could I have done better?”

The end of April, start of May there was a small window of opportunity which appeared for three days. I didn’t see this one coming on the various weather websites and as a result I had booked myself in for a driving course.  I was never as distracted in a course as I knew there was better fishing going on whilst I was stuck in a classroom.  To say my mind was elsewhere was a gross understatement, we as adults normally take in about 40% in the class room, and I’d say I was lucky if I took in 15% those few days. With the bass ban rapidly approaching on 15th May I managed a few days fishing but with high pressure, bright sunshine and prolonged North-Easterlies it was just a case of going through the motions and perhaps just taking a better look at the geography of some of my locations. It’s amazing what you notice at times and how these gems of knowledge fall into place at a later date.

About one week into June I began to stalk Wind guru and XC Weather, it’s a bit like OCD, I have to check it twice a day just to “keep an eye” as it were.  A weather system appeared on the horizon for opening day that immediately excited me a lot; at this point the stalking became every couple of hours.  I hoped and prayed that Wind guru would be right, would this opportunity persist for another 10 days in the alchemy that is weather prediction.  The days passed and the system held on the computer screen, the closer it got the more the excitement and anticipation grew. I was praying to all manner of gods at this point and even considered sacrificing my brother if it would appease the bass gods.

The night before opening day all lures were laid out with military precision, checked, re-checked, all knots and leaders, checked, reel greased, everything was just bang on.  Off I went to bed in some vain attempt or more precisely fool notion that I might actually sleep.  The only thing I can compare it to is being a child on Christmas Eve night, waiting for Santa and hopefully some gift the next morning.

After a weird sleep of maybe 30 min’s to an hour I decided to get up, fire a couple of bacon rolls in me and a strong coffee.  All the gear loaded into the car and arrival at the mark in darkness, it was about 4am, it wasn’t dark but there was a hint of blue in the sky.  I set off across the fields to navigate my way to the mark, what is it about Cork fields that they need SO much barbed wire, it’s a bit like the Steve McQueen ending in the Great Escape at times, minus the funky motorbike of course. I arrived at the mark and sometimes you can think “Oh this looks fishy” but this time it was almost like some primordial hunter gather sense from my genes kicked in and said “there is fish here”  It’s a weird feeling.  I am never one to dive straight in at a mark, even ones I have fished a lot.  It’s always better to take a moment, sit down and have a good look around just for any signs. The morning was still grey; there was a small push of South Westerly on my face and just a small ripple on the gin clear water.  I looked at a spot and thought “That’s where I will start”  A series of shallow gullies extend out over broken rocks where the water on a flooding tide at this stage was maybe only 5 feet deep, the long sea grass just touching the surface.  If I had stood up on the rock to cast any fish that were there would have been gone, so at times like this I take the ninja approach.  Standing in the water up to my chest I cast round the side of the rock, the surface lure plopped and spread a small ripple.  Wait, wait…..leave it then a gentle walk back to me, the tail of the lure happily going side to side. BANG!!! There was a swipe, a quick flash of silver, a swing and a miss.  This is not the time to panic, stay focused and continue to walk, then a solid bang on the lure from below and a good hook up.  A quick wrestle and a nice fish just over 4lb landed.  My first bass every year is almost an emotional moment, the self-doubt vanishes instantly at this point and you realise that you haven’t in fact lost “yer mojo” Quick to repeat this initial success I kept on fishing, quietly stalking my way around various rock formations in the pale blue light of dawn.  The top water lure is my favourite type of bass fishing, it’s very visual and as a result, very exciting.  Another four fish decided to play and were around the 4-5lb mark.  At this point I couldn’t have been much happier.  I went a wee bit further to a spot I had seen a fish quietly resting beneath the under-hang of a rock one day previously and thought who knows???  I landed the lure about 8 feet away from the spot, let the lure settle and began to walk.  There was a good powerful take from below and I felt the dead weight instantly, I knew this was a better fish.  The fish swam with the lure towards me for about 30 feet and then spotted me, off she went and the kiting started.  The drag went, the rod arched and off she went.  It’s a fairly rocky mark so I placed the trigger finger on the side of the spool just to slow the fish and bullied it a bit to get it under control again.  The fish came up the side of the rocks, had a good gawk at me and off she went again.  A few expletives went through my mind which translated to “that’s a nice fish”.  As ever, I am in the most precarious of spots, but managed to get a hold of the fish, acutely aware of the bend in the rod and the possibility of high sticking it. A quick snatch of the leader and the fish was landed.  It’s moments like this the bass fever sets in when you are presented with a magnificent bar of silver, you go all fingers and thumbs and turn into a total amateur.  Out came the tape measure and the camera, click, click and of she went again with that note of attitude in the flick of the tail that could only come from a female. What a start to opening day, my lust and admiration for these great creatures had been appeased so it was time to amble back over the fields replaying the earlier event over and over again.  Yet again, “Bass had made me smile”