The two smaller sizes come in packs of five, the 9/0’s come with four hooks, and you get three, single 10/0’s in a pack.

On inspection, these hooks are of the highest quality I have come to expect with Owner, extremely strong and surgically sharp. I could regurgitate the blurb that extols the virtues of this product, but as always, I prefer to put products to the test. With this in mind, I headed out to sea last Sunday under perfect conditions with two of my angling pals in search of something “lumpy” in a bid to straighten one of these high-class hooks! After finding some necessary Mackerel, I suggested a virgin, deep-water mark that I had noted on the sounder three seasons ago. The lads were up for it, and once the tide was pointing in the right direction, I positioned the Fast-fisher and dropped the “pick”. This potential mark is a bit of a gulley, soft clean ground between rough, rocky slopes, and looked absolutely perfect as a predator’s hunting ground, and the Fast-fisher was perched exactly where I wanted her. Time to step-up the bait size, no bother for the Owner 10/0

I opted to use only the circle hooks provided, and put a 10/0 on the lower snood and an 8/0 on the upper. My intention was to sort out “dogs”, Huss and Black-mouths on the smaller hook, with a chance of Conger, large Huss, and Ling on the lower, larger hook. Snoods were constructed with 150lb mono to be on the safe side, as Spurs, Tope and Common Skate are never far away when targeting these deep-water rough ground marks. Skate on! Give her some welly!

Once the boat and tide had settled sufficiently, Dog-fish queued up, but we were amazed at the sheer numbers of Black-Mouthed Dogs that also appeared, normally a relatively rare species. Looks like I have found a new hot-spot for these! Although the session was extremely busy, the dogs were becoming tedious and a change in tactics was called for. Keeping the same rig and hooks, I “upped” the bait size, with a whole Calamari and Mackerel head and guts. The size 10/0 coped with this fine and next “thump” on the rod tip put me into a whole different ball game! 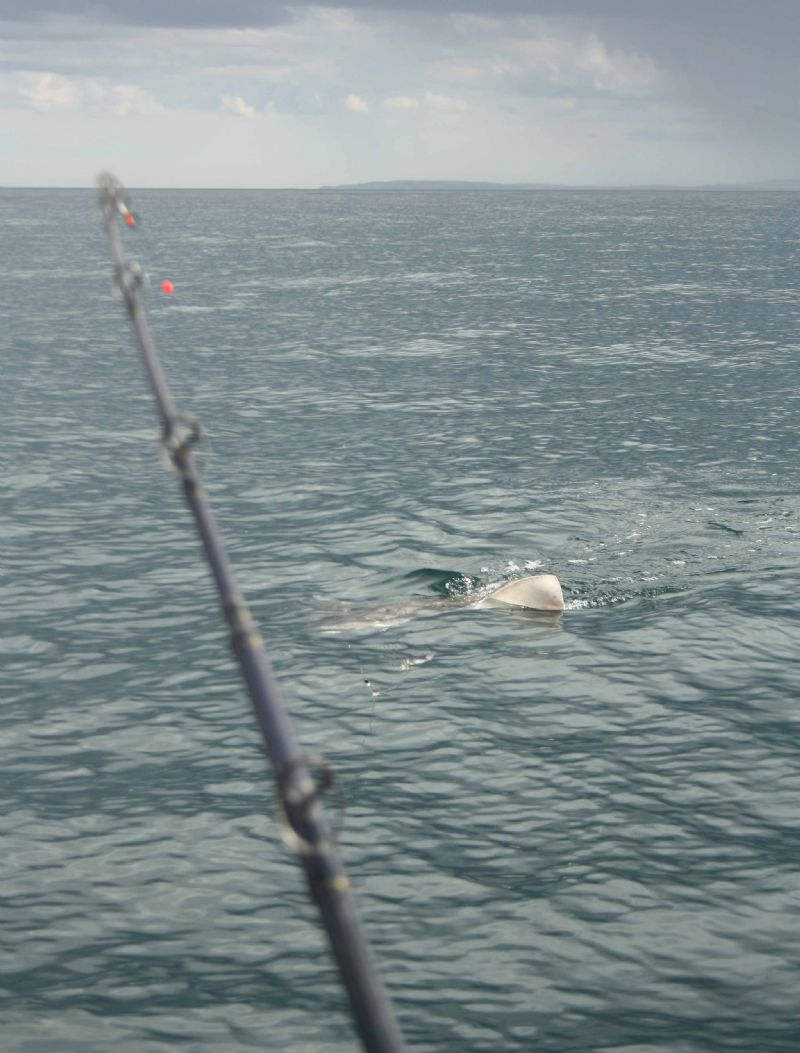 Great to see them break the surface, hook holding well

As I bent the Wave-blaster into the fish, it was obvious that a Skate had taken a fancy to the large bait, perfect way to give the Owner a real test, I thought. It also put my Penn Fathom through its paces, now on its fourth season and still like the day I bought it! Twenty minutes later and a decent Common broke the surface, not a monster at eighty pounds, but I prefer the little specimens these days, not so hard on the back! The 10/0 was neatly positioned in the scissors and easily removed, handy for both angler and fish. Owner easily removed, although she can keep the Mackerel head!

I used the Owners for the full session, and hand on heart, never lost one single fish, including Dogs, Black-Mouths, Congers and Commons, not bad considering we were fishing in over 400 feet of water! The best part of the day was when another Skate showed up, this time on young Andy’s rod. This was his first Skate, and a nice way to start at 152 lbs. Glenn and I had a great laugh at his expense, struggling to prise her off the sea-bed. To read this article in full, and much more besides, have a look in the blog section of this web-site. Tight Lines, Terry.