Dessy Young with a typical Pouting

Pouting are abundant throughout Ireland’s in-shore waters, and in reasonably large numbers. However, they are mostly small in size, especially for the shore angler. To find the bigger specimens it is recommended to boat fish over offshore reefs, pinnacles and in particular, old ship-wrecks. In these deep-water habitats, they tend to shoal tightly in, around and above these food-stores, picking off any small tit bits that happen to pass by. The South-east of Ireland tends to produce the bigger fish, from the excellent rough ground of Kilmore Quay in Wexford right round to the numerous reefs and wrecks off the Cork and Kerry coastline. The largest Pouting that came my way was a 2lb 8oz fish taken over a reef out of Killybegs some years ago. Unfortunately I haven’t been able to find one anywhere near that size since! 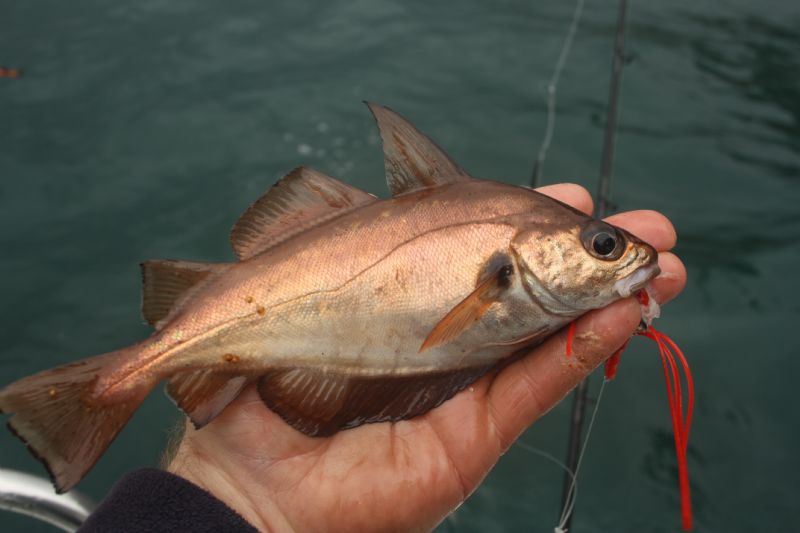 When boat fishing the season is almost year long, but late spring through to late autumn would be the peak time to target larger specimens. Smaller fish can be caught whilst shore angling throughout the year. Pouting would be a very difficult species to target over specimen weight, with many being caught by chance whilst targeting Pollack, Conger, Coalfish and Wrasse.

Almost all recognised sea-fish baits such as Mackerel strip, Sandeel and Squid, also Lugworm and Ragworm work quite well. Baited feathers, “hokais” or similar are simple and work a treat.

Baited feathers dropped over reefs and wrecks will easily find Pouting, usually in two’s and three’s it has to be said. Finding the larger specimens is very difficult, and realistically most likely a numbers game. Keep catching until a “bruiser” comes along!

From the shore, juvenile Pouting are present on most venues, but usually later in the year and almost entirely after dark. This is when they tend to move in-shore in numbers, feeding on shrimp and juvenile bait fish, sometimes becoming an absolute pest as they rip lugworm baits destined for larger species, to shreds. It is sometimes not a bad idea during these situations, to leave a small, self-hooked Pouting out there in the hope of something larger finding the tasty free snack!