Rainbow Trout are typically green to dark-green along the back leading to silver flanks and pearlescent belly, with a “rosy” or crimson ribbon of colour along and above the lateral line and gill covers. There are numerous small, dark spots on the head, along the back, the flanks and over the tail. These are a non-indigenous Irish species whose ancestors hail from North America. Originally imported into Ireland in 1899, they have an incredible growth rate but are reasonably short-lived, 3-4 years. Triploids will live 7-10 years. Rainbow Trout in Ireland are almost entirely utilised in “put and take” fisheries. At this time of writing, there are numerous fisheries throughout Ireland. 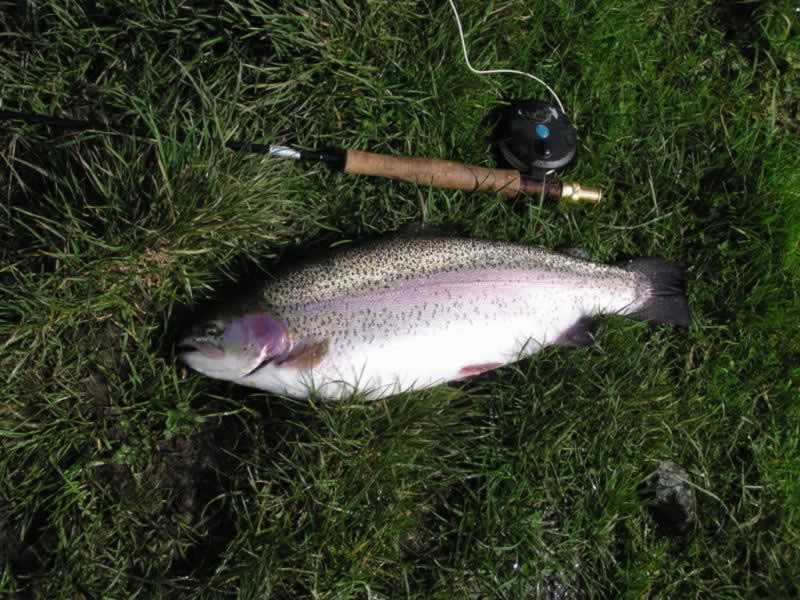 There is no close season for this species, and as such, can be targeted throughout the entire season. Fly fishing is the general accepted method of targeting Rainbow Trout on most fisheries, although there are some venues that allow limited bait fishing or spinning. Rainbows are to be found in waters all over Ireland. Most Rainbow Trout fisheries are in private ownership and permits and licences for these waters are widely available.

The main difference between Rainbow Trout in Ireland and their native North America is Rainbow waters in Ireland are all artificially stocked. Ireland is un-able to sustain breeding populations that would allow extreme angling pressure. However, many visiting anglers are surprised by the size and quality of Rainbow Trout that are found here.

Rainbow Trout are superb fish to catch. They will readily take an artificial fly and have excellent table qualities. With very little Rainbow rivers in this island, it is mainly Stillwater in which this species is found.

Visiting anglers will find that the rods and tackle they bring with them are sufficient, and because fly patterns world-wide are so similar, any fly box should contain a concoction of fur and feather that will fool a fish.

Streamers such as Mickey Finn and Whiskey Fly are as familiar here as in the rest of the world, but occasionally here local anglers develop something more effective for local fish. Enquiring at your chosen fishery as to fly selection will improve your chance of a great days sport.

Dry fly fishing on still waters has advanced over the past few years with many successful patterns being developed that are completely opposite from traditional dry-fly roots. Irish anglers development of these flies has been driven by their knowledge and experience of Brown Trout fishing and maybe visiting anglers will take some of these ideas home with them.

Some essential flies for Irish Rainbow