Reporting back on some early Sea-trout fishing by Andrew Wolsey 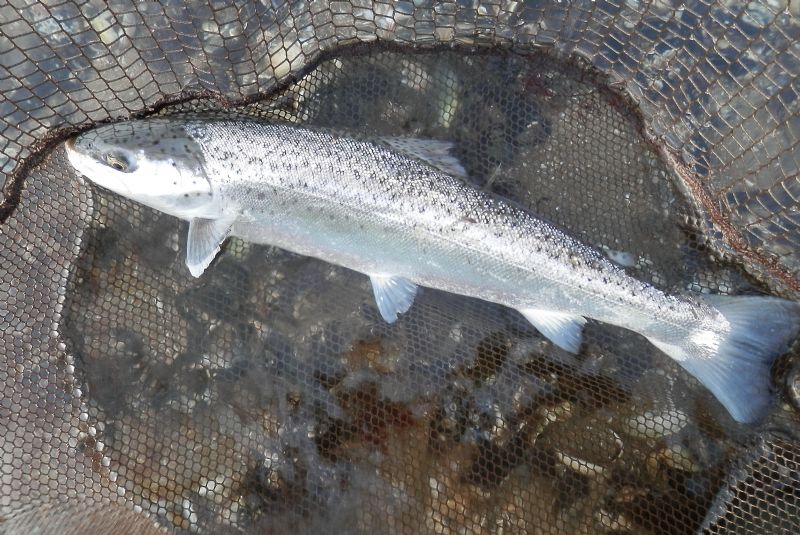 Reporting back on some early Sea-trout fishing.

When winter comes to an end the change in season for me is usually marked by a few early sea-trout sessions.

Come the 1st of March, the Northern Ireland Game season is open and provided you have a Game Rod license you can target sea-trout in both saltwater and freshwater although most rivers and loughs will require additional permits or club membership.

It’s also worth mentioning at this stage that from the 1st March 2014 “all angling for salmon and sea-trout in the D.C.A.L jurisdiction will be mandatory catch and release”. To my knowledge this law applies to both saltwater and freshwater and I know anglers who were informed as such by a D.C.A.L bailiff last year. There does however seem to be a fair bit of confusion or denial about the current situation and I agree there is a lack of information printed on licenses. Personally I practice catch and release anyway and I’m unaffected by the change in the law. 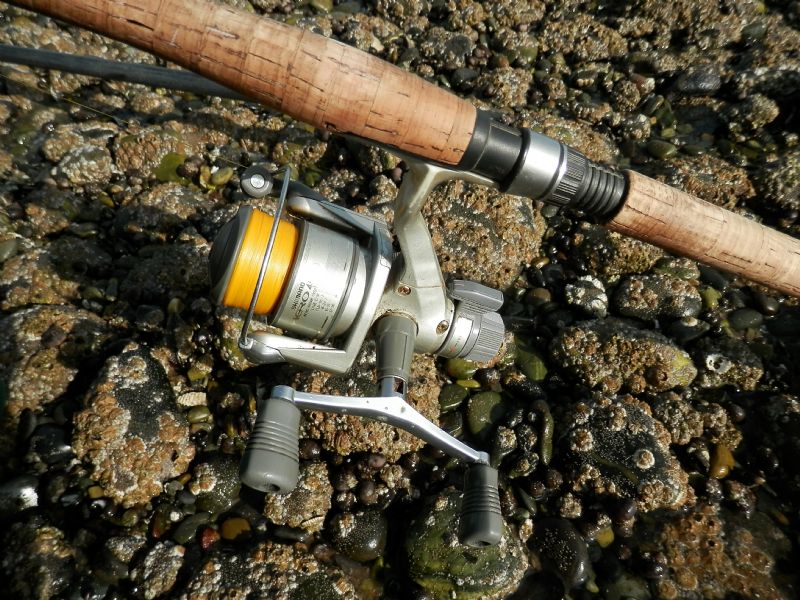 18lb braid may seem over-kill, but low diameter and strength will also handle a bonus Bass or Salmon

The weather during the first few weeks of the new season was stormy so the first outing was delayed until the sea had calmed down to a fishable state. This down-time was not wasted as it gave me a chance to prepare. Tying up a few rigs, replacing hooks on spinners and servicing reels will serve me well when the weather comes good. When the forecast started to look more promising I consulted my tide table to look for a suitable window of opportunity. Time and tide waits for no man so making a plan is always worthwhile even if you don’t end up sticking to it. 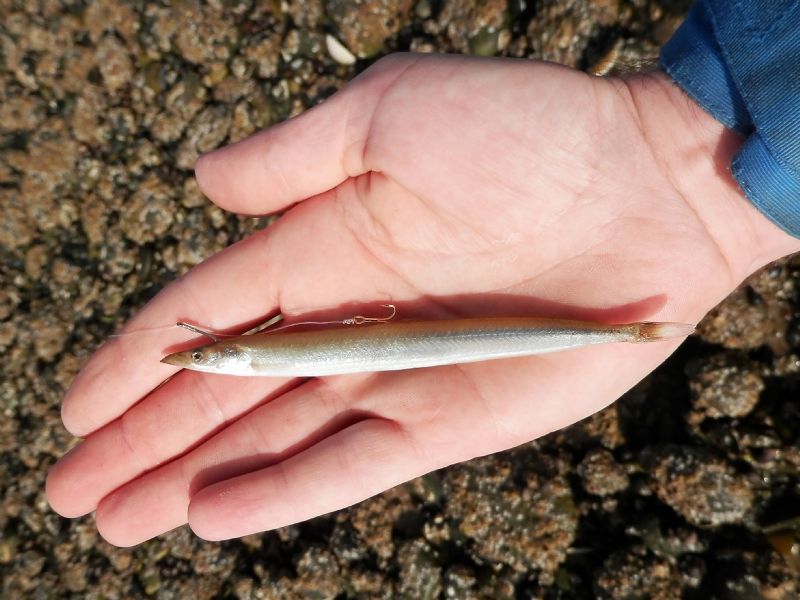 Frozen sandeel tactics on this occasion, head-hooked with a "stinger" in the tail

1ST Outing of the year;

On arrival at my chosen mark it felt great to be back on the shore for the first time this year. Conditions looked good with light winds and the water clear and relatively free of weed. I have targeted sea-trout using all methods including spinning, fly fishing and bait fishing, all of which can be effective on their day and suited situation. I had brought a packet of frozen sandeels with me and decided to start off using them. I opted to use a bubble float with a 6ft, 8lb fluorocarbon leader. 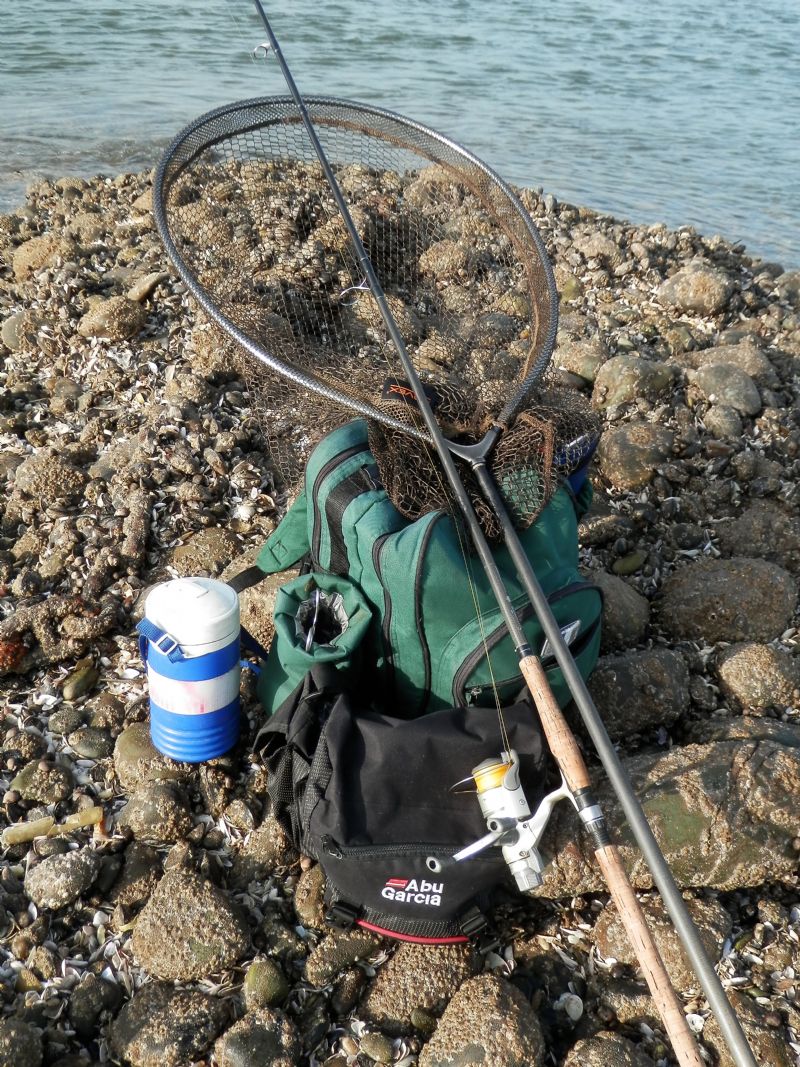 Tackle kit chosen for travelling light, always on the move

I made a start making my way along the shore-line following the direction of tidal flow. After an hour or so I hadn’t had a sniff and to make things worse I now had a seal for company. There are two schools of thought regarding seals when shore fishing. One is that they are a nuisance and scare all the fish away (which is true) and you may pack up and go home. The other is that the seal is in the area because there are fish (food) there and you should maybe sit it out in the hope that the seal goes away. I wouldn’t bother trying to scare a seal away as it only seems to encourage them at times and they will end up following you, thankfully not home but along the shoreline. In this case I opted to sit it out and thankfully the seal didn’t hang about for much longer allowing me to fish on in that area. 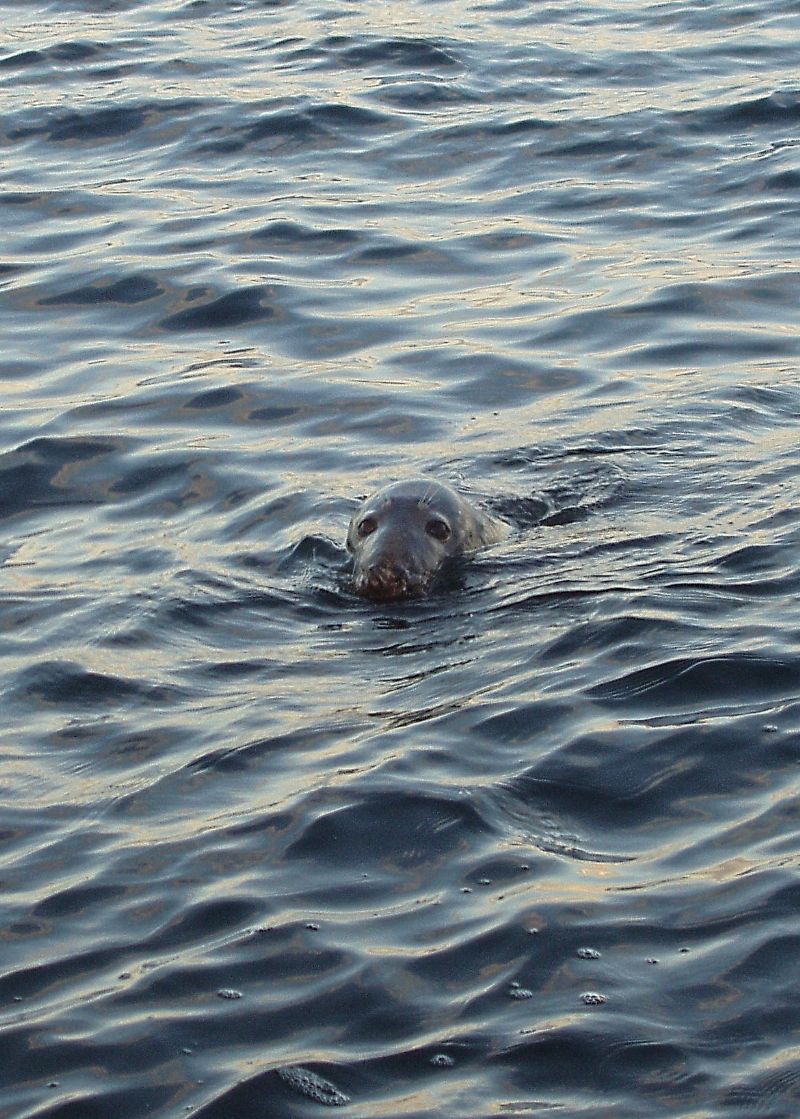 Lovely to see, but almost always a problem for the shore angler

Sea-trout usually give themselves away by jumping, although I have found this less so in the early months of the year. Either way I hadn’t seen anything for a couple of hours. Sometimes you just have to believe the fish are in front of you. Having said that my belief was fading but I don’t give up easily. I finally got the take I was waiting for and what a take it was! I had the bail arm open at the time and the fish was running so fast it was difficult to get it closed again. Its times like these you hope your drag isn’t set too tight or your going to get bust off in seconds. Sea-trout are easily lost and I tend to play them gently and with line being stripped from the reel I found myself chasing after the fish just to regain some line. In doing so I ended up about 60yrds from where the fish was hooked which played into my hands as the current was not as strong this made netting the fish much easier. Carrying a decent net can be a pain when on the move but when you need it you’ll be glad to have it. 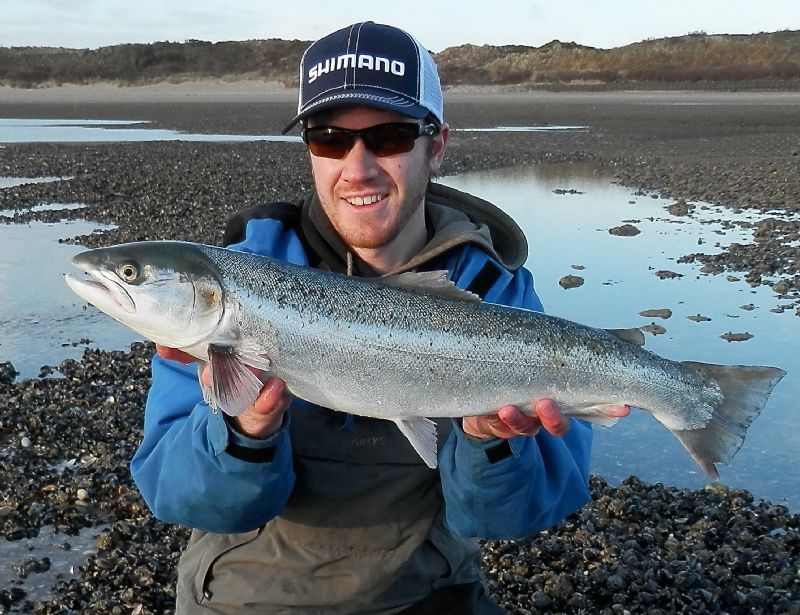 Personal Bests with any species are always a great achievement

I knew the second I hooked this fish it would be a personal best if I could land it and I wasn’t wrong. She weighed in at 5lb 14oz, just 2oz shy of specimen weight which would have been nice but I wasn’t complaining. The fish was lean and slightly rough around the edges, suggesting that it was a Kelt which is a fish that has successfully spawned and is returning or in this case has returned to the sea. After a few quick photos’s I put the fish back in the net and held it in the current allowing the fish to fully recover before being released. Sea-trout are delicate fish and don’t do well out of the water and for release to be successful handing should be kept to a minimum. 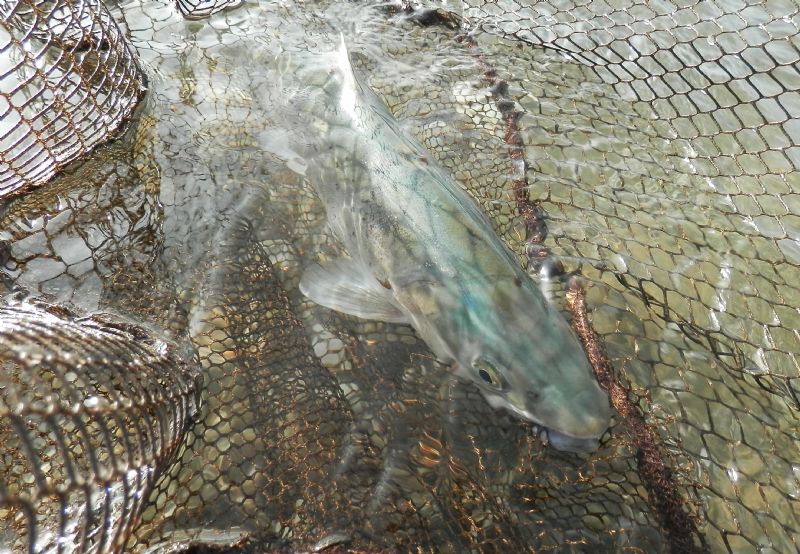 Careful handling, and time to recuperate in the landing net before release

A few weeks later over the Easter break I found the time to get back out on the hunt. The weather was un-usually glorious for the time of year so as they say; make hay whilst the sun shines. I employed the same tactics as before and managed a great result catching and releasing four fish all between 2lb and 3lb. Having also missed a few takes I eventually ran out of bait which was hugely frustrating although somewhat satisfying, signifying a great days fishing. 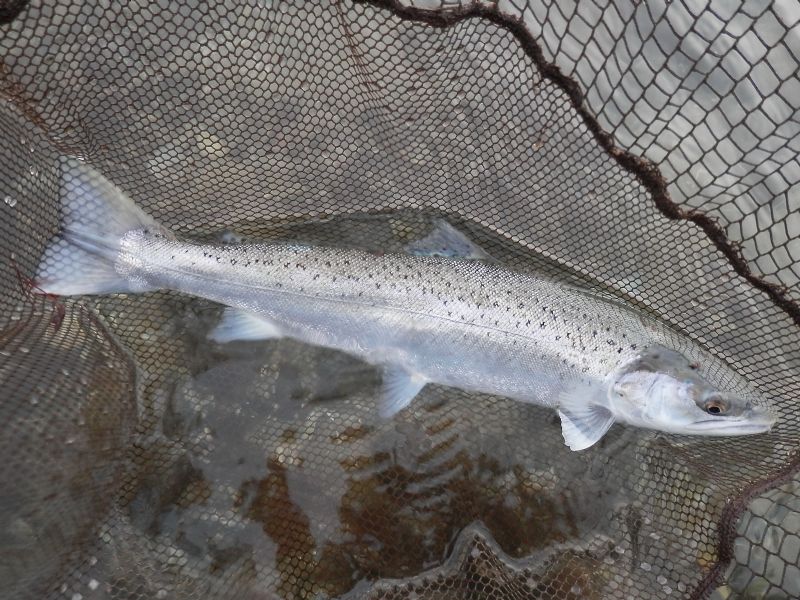 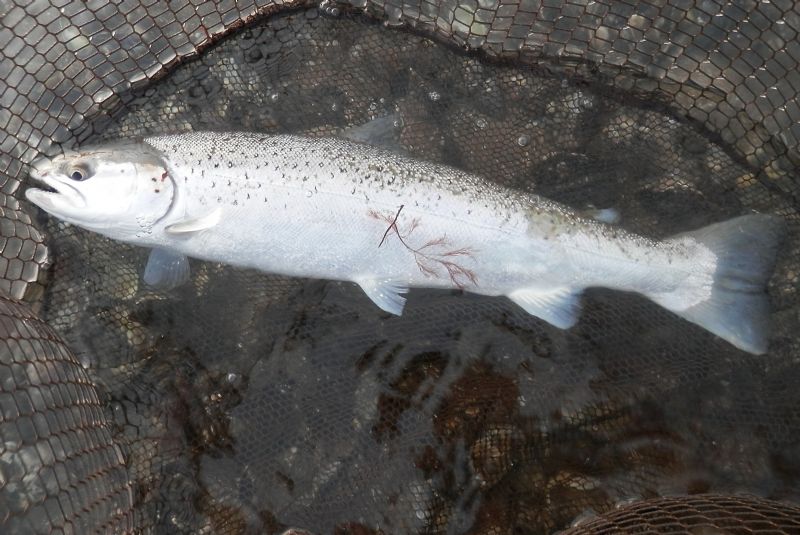 I returned the next day which is not something I usually do after having a good sea-trout session. The only reason being that I have never been able to achieve a good consecutive day’s sea-trout fishing and as if to prove a point I never got a single take for the days fishing. The fish had not moved on as at times they were nearly jumping over the end of my rod. Infuriating but you have to see the funny side. Had the fish wised up over night, had they been feeding heavily through the night and were gorged? Was there a slight change in weather conditions or moon phase/tide? I have no idea why they can switch off so suddenly but it would be no fun if we knew it all. Fishing for sea-trout can be difficult and usually is. They can be here today and gone tomorrow but more than likely gone today and were here yesterday but if you are lucky enough to catch it right it can very rewarding. 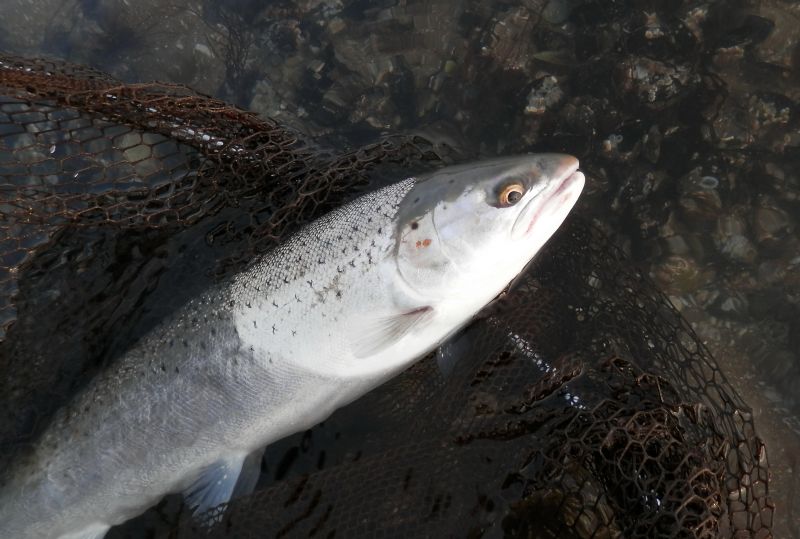