Irish Record Currently, there is no record or specimen status for this species.

As the name suggests, it’s like a large Tadpole! There is a small dorsal fin on the back, then a long dorsal running back to the tail. The anal fin is similar. It has large pectoral fins that look quite powerful. Maybe to nudge and push about in small stones and weed, or perhaps to perch itself up a little on the sea bed. Large eyes and a large, white mouth lined with an array of small, pointed teeth. It also has an elongated barbule on the chin. The colouration is dark brown, much the same as kelp weed, and the skin is quite smooth. This, almost cartoon-looking species seems to be a bit of a rarity around the Irish and UK coast, but I strongly believe that this is in some part due to anglers not really bothering to target them, rather than a lack in numbers. Certainly, they are not a shoaling fish, but inhabit extremely rocky, reef and kelp beds close to the shore. With a huge, tooth-lined mouth and large eyes, it would suggest a nocturnal-feeding, “ambush-gulper” life-style. Being almost jet-black in colour, this small, “swimming stomach” will lie in wait amongst the dark boulders and kelp, swallowing any un-suspecting animal that passes by. I caught my first Tadpole Fish in Bangor, a coastal town in County Down, but they have been recorded from many venues around Ireland and the UK coastline. I am told that areas around Arklow and Ballycotton have produced Tadpole Fish throughout the years. Most are caught by accident, and many are also miss-identified. Although they cannot really be classed as anything other than a novelty capture, they are extremely endearing and great fun to target.

I landed my Tadpole Fish whilst targeting Rockling through the winter months. To be perfectly honest, I do not know whether this species remains close to shore all year, or similar to large Rockling, move out to deeper water as the in-shore sea temperatures rise. The only way to find out is to continue targeting the same areas throughout the year and build on this knowledge further.

As with almost all shore species, fresh Mackerel strip, Sprat, Sandeel, Peeler crab or any other common sea bait with good scent and oil content. 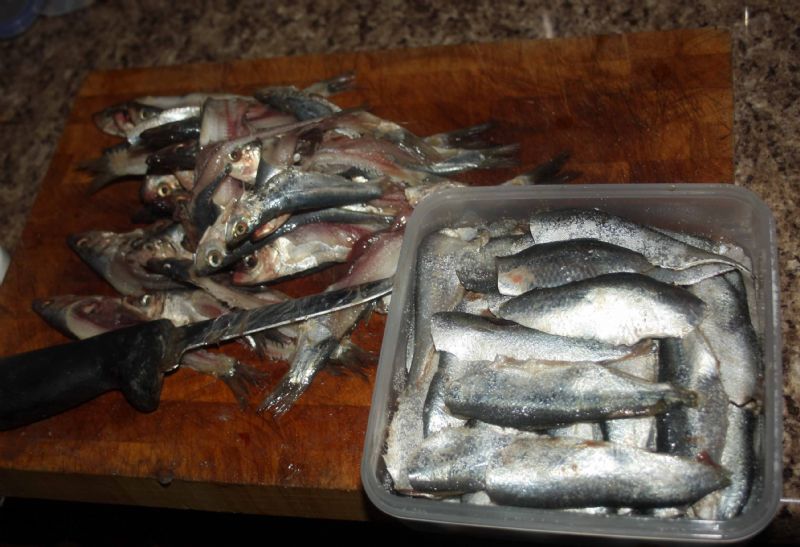 Fillets of Sprat worked for me, with the left-overs chopped fine and used for a scent trail

To target Tadpole Fish, you need to understand their habitat and method of feeding, something that can be said of all species. They seem to prefer extremely dense reef and kelp beds, within a metre or so from the shore. With this in mind, use a heavy breaking strain for your main line and rig body, lighter hook length and single, fine wire hook, with a weak link of line to the lead-sinker. This environment will be a “tackle-graveyard” so aim to straighten the hook should it become caught up, or at worse, break the hook length, and be prepared to sacrifice the lead weight on many occasions. Carry a few spares! Poking about between boulders and “holes” in the kelp beds is difficult with standard shore gear, try to sort out a small rod and multiplier, some of the kayak rods are ideal for this type of angling.