The main identifying features are the dorsal arrangement, the “trigger” locking mechanism of the first and second dorsal fins which give the fish its name. By depressing the second dorsal, this will un-lock the rigid first dorsal spine. The body is almost circular or plate-like in shape and the eyes high and well back on the head. As with Wrasse, the skin is tough to withstand reef habitat. Although the mouth is relatively small, the jaw has eight extremely powerful incisors that are combined to form a “beak” tough enough to puncture or chisel shell fish and molluscs. 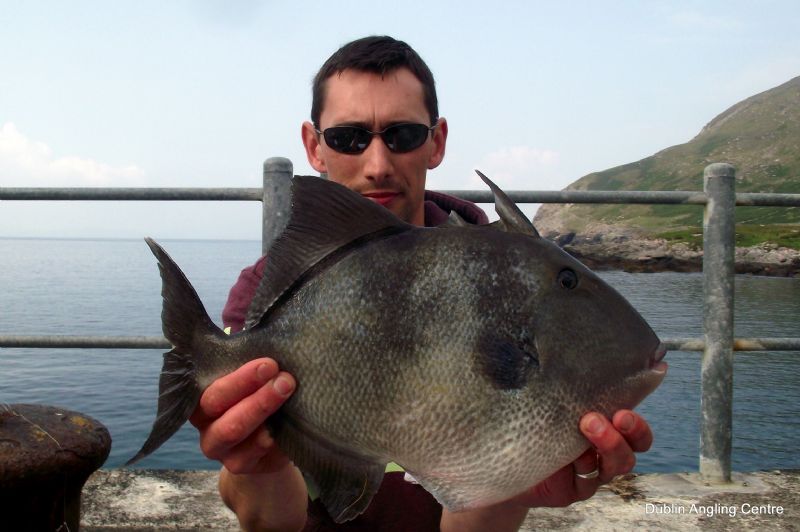 Craig Murphy with a fine specimen

Although once considered quite rare, the warmer seas of the south coast of the UK and Ireland are beginning to contain larger shoals of this tropical species, and in some areas are considered common-place. Although often seen “cruising” close to shore, they prefer reefs and rocky headlands leading into slightly deeper water. These reefs and stony or broken ground are the habitat of molluscs, shellfish and invertebrates required to sustain a population of Trigger Fish.

The ideal habitat in Ireland are the numerous headlands, in-shore reefs and coves found along the Kerry Coast, but Triggers have been noted around most of Ireland, even caught at Portrush on the North Antrim Coast, although it has to be said, this was during an un-usually long, warm summer. As with most of our tropical and semi-tropical species, the summer months offer the best chance to find Trigger Fish, particularly late summer and calm conditions.

Mostly shellfish and crustaceans, although will feed on other food sources which are present. Peeler Crab and Mussel are top baits, but Triggers will take worm baits and even Mackerel strip, usually by accident when targeting other species.

Although usually caught by accident when seeking Wrasse or Pollack, if Triggers are present, they can be specifically targeted. They can also be seen under calm, clear conditions, often moving in a “follow the leader” formation. Many are taken fishing bottom baits, but under the right conditions, the more delicate presentation when float fishing can be excellent. Again, if conditions dictate, fee-lining a crab or whipped-on mussel bait using fine bait elastic will also be effective. As the mouth-parts are relatively small, use a smaller hook, size 1 or 2, but in a strong Aberdeen pattern. Hook-lengths should be at least 30lb B/S to stand a chance of landing a Trigger without being “bitten off” by the powerful incisors. I remember reading somewhere that longer shank hooks are beneficial for this very reason.