During the summer I paid my old angling buddy Sidney Kennedy a visit on his home turf down in Cork City.

He had a potentially serious upcoming operation to deal with and I wanted to get out fishing with him to take his mind off of it.

Hopefully some friendly banter, good fishing, and I like to think decent companionship would be just the medicine required for a little respite.

Commitments were such that Sid would not be able to join me the first day, so Bill Brazier and I took a run along the coast on a Mullet mission. Stopping off at every small bay, inlet, estuary and canal, we ran into decent numbers of fish. Amazingly we managed to pluck out a hard hitting Irish “bone-fish” or two wherever we saw some pods, and that was almost everywhere. As we continued on our journey, we found some truly wonderful marks in wild and stunning locations. What a fantastic part of Ireland West Cork is. It offers everything for the angling tourist in respect of wild fish, breath-taking scenery, hidden harbours and coves, estuaries and inlets, shoals of freely feeding Mullet (on most occasions) and of course, a warm and welcoming pub around almost every corner! 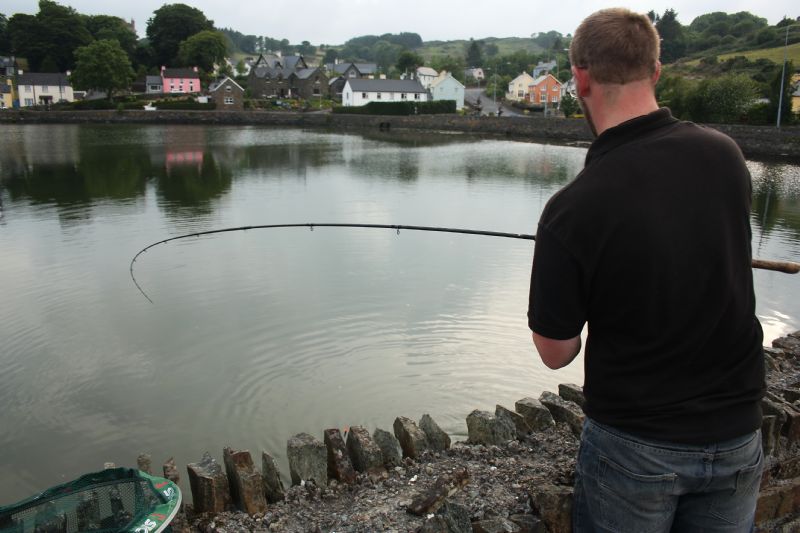 Eventually ending our day in the quiet village of Rosscarbery, we eventually met up with Sid, and as you would expect, if you know the guy, he had a Mullet hooked and landed for the camera within a couple of minutes of arrival! It was great to see my old mate again, but he was understandably feeling a little below par with news that his operation would be brought forward. This only left one day of freedom before being whisked off into hospital. As usual, it only takes a couple of minutes before Sid finds some action

I asked what type of fishing he wanted to do the following day and he was happy to continue with the Mullet. This was great as Bill and I had some good news. Towards the end of our Mullet search, we had found a mark with plenty of large fish, but had unfortunately just missed the action with the tide ebbing. It was well worth another look. Also, there were good shoals of smaller Mullet “dimpling” on the surface, and a quick switch in tactics tempted a decent Golden-Grey Mullet just under specimen size. I think we had sufficiently wetted his appetite somewhat and agreed to return early the following morning.

The only downside was that Bill now had commitments and would not join us on this potential hot-spot. Such a pity, as he was part of the discovery, and a great angling companion to spend the day with. On our way home to Sid’s for the night, we stopped and dug a few harbour rag, aka “maddies” just in case the “goldies” were present again. The following morning was an early start, and I am talking Sidney Kennedy early. He gave me an alarm call kick at 3.30am and with a cuppa tea down, we were on the road for shortly after 4am. A couple of stop-offs on the way produced some hard-scrapping torpedoes so at least we weren’t facing a blank! The pressure was off and with the sun threatening to show, coupled with light winds, it would be a relaxing and stress free day. That was the plan at least.

We arrived at the mark and the pods of Mullet were lined up like fish in a barrel. Our free samples of bread were “wolfed” down as quickly as we could catapult them in and you never saw two anglers get set up and fishing as quick in your life! It always amazes me why wild Mullet in open sea will often respond so readily to offerings of bread, something so far removed from their normal diet. But they do, and on this occasion, couldn’t get enough of it. 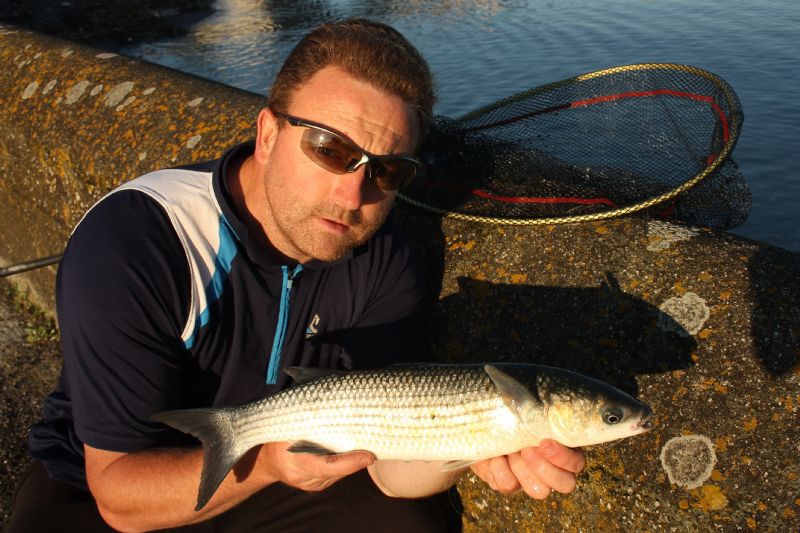 First cast and we were each into a fish, and could these Mullet fight! It was bordering on ridiculous to be honest. I have caught hundreds of thick-lips and never felt such power as these fish displayed. Was it temperature? Time of year? Venue? Or perhaps particular strain, I have no idea. What I do know is these fish kicked back and a great deal harder than normal, and that’s saying something. And a near miss for me

After a few fish landed and a couple of break-offs, the hook-length had to be “upped” to 10lb B/S which is an in-sane “step-up” from the 6lb I am used to using. This detracted none from the bite ratio and prevented any further un-wanted fish losses. Over the three hours of the tide, we tallied over forty Mullet landed between us, and eventually had to admit defeat with six loaves gone, and no back-up. The fish were still there and feeding, we had nothing to catch them with! Amazingly, despite such an amazing number landed, and ALL fish over the four-pound mark, we only had one five pound specimen for Sid, and one lost specimen for me, which is by no means a complaint I hasten to add! I have never seen so many four and a half pound fish in one session!

Another close call! Only ounces under, but what a cracking fight from this long,lean fish

Obviously we broke the gear down and raced to the nearest convenience store and frantically purchased another six loaves, but upon return, our shoals had had enough and moved on. Although we thought about what could have been, we couldn’t help but bask in the glory of what we had just taken place. A quick try for “goldies” produced one tiny Grey, even these had moved on as well. I should have put this baby above the shark on my shirt, good to see the little ones too

With half a day left and now fully “breaded-up” again, we continued our search along the coast, and it was back to normal by Cork standards. Every now and then a stray fin or gentle bow wave belied their presence. We would screech to a halt and un-bungee the rods and pluck out one or two fish. We now had our Mullet hunting down to a fine art. 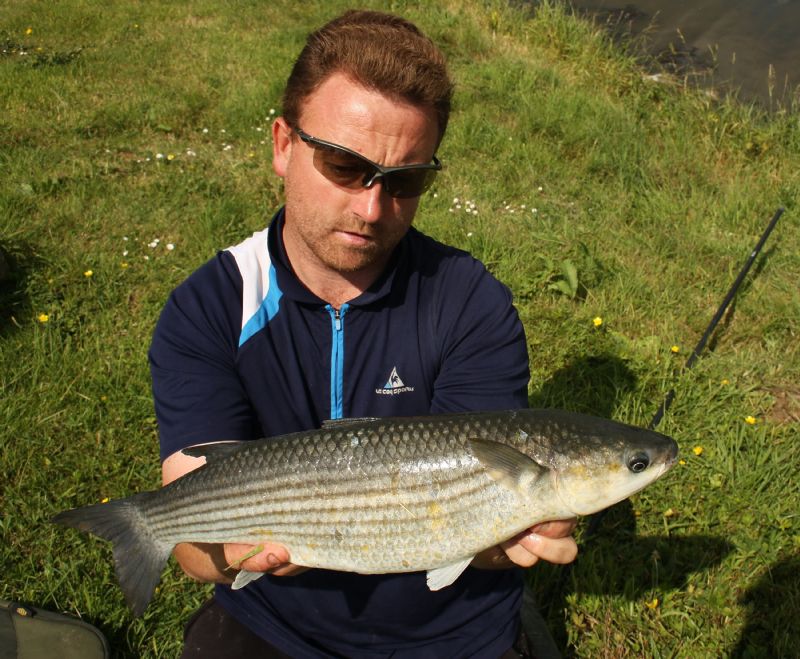 As the sun settled over the horizon, it was time to call it quits, but what a day, and one that will go down in my personal records as my best Mullet day ever. Certainly, I have had better specimen days, landing three or four fish over the magical 5lbs barrier in a session, but today, after tallying up our catch, we managed to land fifty five fish and lost or missed at least the same again. If only this was the “norm” I think I would hang up the other fishing gear for good! Sid kept his hospital appointment, and I am extremely happy to say the op went according to plan. We can’t get rid of him that easy! I stayed an extra couple of days to see how he faired and to visit him during recovery. Some cynics may say I only stayed the extra days to have another go at the Golden-Grey shoal we had seen earlier, and I would like to go on record to dispute that accusation here and now. The fact that while Sid was under the knife, and I happened to hook and land two fine specimens is purely coincidental, and I made sure I rang him in his hospital bed to tell him so! West Cork, what a venue!