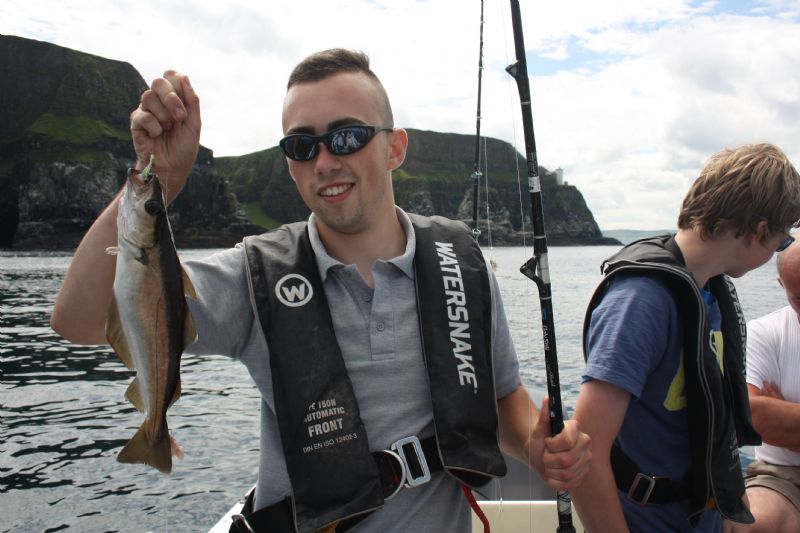 Once a year for the past seven years, I have offered the young angling volunteers from the “Angling First” charity in Northern Ireland a potentially memorable deep-sea angling adventure.

It all began back in 2008, when charity director, Mark McGivern asked if such a trip would be possible.

Since then, and as most of the volunteers have only ever fished in fresh-water, I have had the opportunity to show the guys an alternative discipline in angling.

Most of the young lads I meet later move on to other opportunities in life, and a new handful will sign-up to the charitable angling cause. The charity gives these young lads a great life-education as they move towards adult-hood including people-skills, decision making, organising and growth in confidence. Many of these youngsters move on to good job opportunities with their new-found skills. It is also a credit to the charity and the volunteers under Mark’s guidance; that they manage to deliver an angling experience to over two thousand individuals each season! John with his first ever Coalfish

So, with this in mind, I don’t mind “pushing the boat out” excuse the pun, and doing what it takes to find these guys some decent fishing. This adventure would potentially be from harbours along the Antrim Coast, including Cushendal, Ballycastle and Dunseverick. With weather and tides in our favour, conditions seemed fine for an exciting trip. On meeting the guys, they seemed so young, I wasn’t sure if they would be able to handle the deep waters and lead-hauling required on these off-shore marks. Although Ryan was twenty two, John and Richard, or “tricky” as he is known were only thirteen years old! 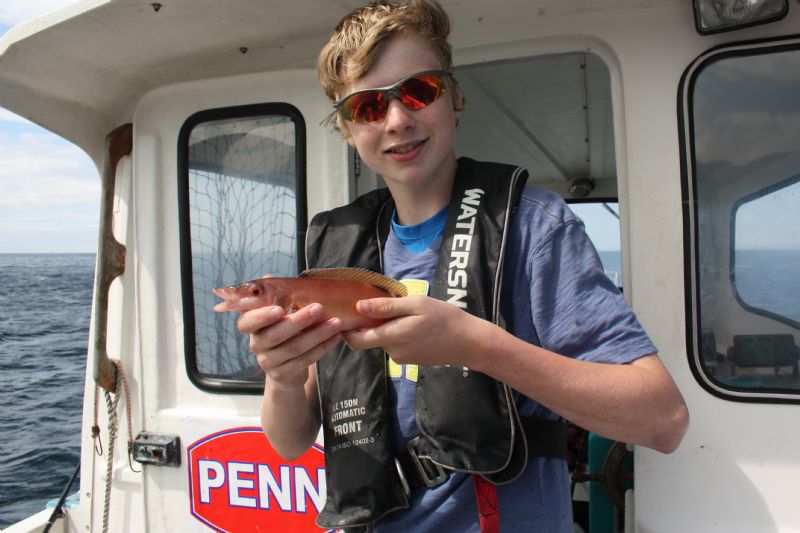 Richard with a female Cuckoo Wrasse

As I write this story, July 2014, Mackerel in Ireland are becoming a scarce commodity. The additional commercial fishing in the North Atlantic of this extremely important species is really beginning to take its toll on the density and size of shoals reaching our shores. This is of extreme concern. As we soon found out on our trip, it can take almost a day of angling just to find enough Mackerel for bait, a resource that was in abundance only a decade ago! Will they go the same sorry way as our Herring, Plaice, Turbot, Haddock and Cod? You can almost guarantee it!

Mackerel were scarce, but we managed to find just enough for our session. The plan was to target Spur Dog, Bull-Huss, Conger and possibly a bonus Common Skate, but with anchor set and tides slowing down perfectly, it was only the humble Dogfish that graced us with their presence. This is my third trip over these marks, and worryingly, I have yet to see a Spur this season! As the anchor rope slackened towards high water, a positive “nod” on the rod-tip let me know something larger than a Dogfish had arrived into the arena. This is when I found out that the lads had drawn straws to play the first heavy-weight to show, and “Tricky” stepped up to the mark. 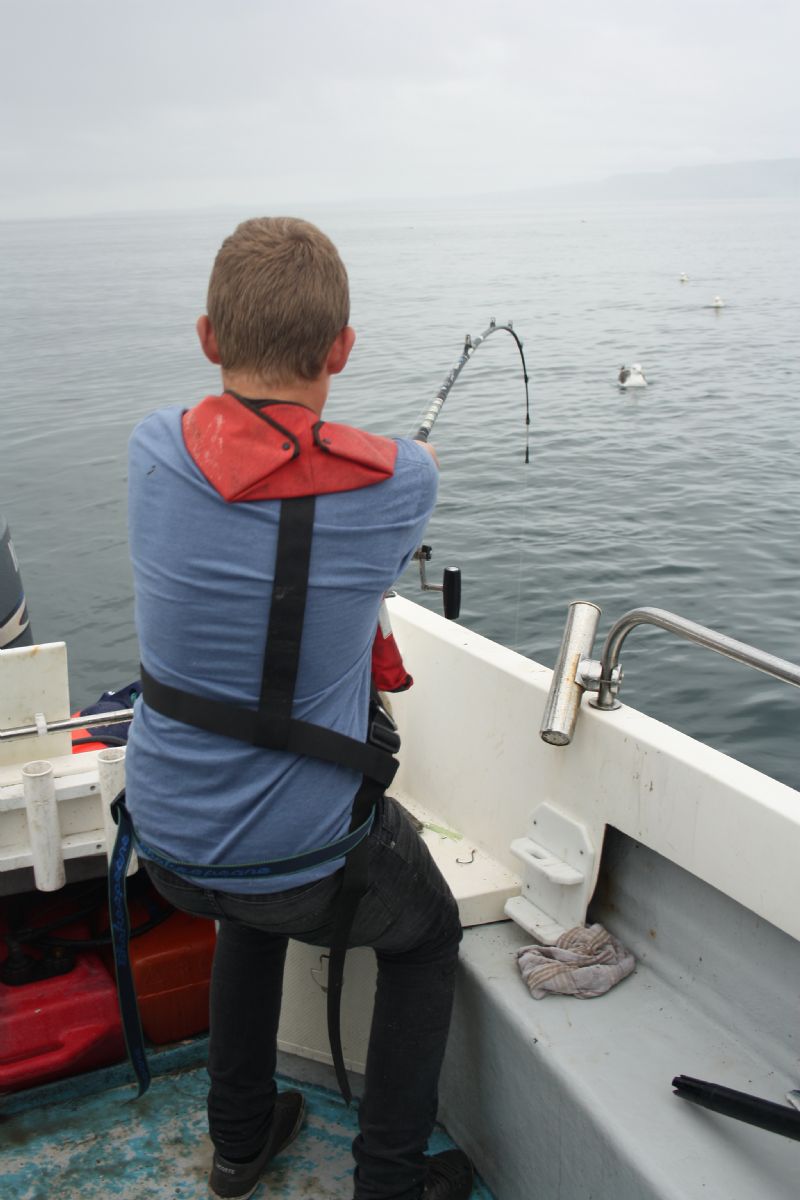 As he lifted the rod, the shock on his face spoke volumes; Tricky was now hanging on to his first Common Skate. I fitted the Penn shoulder harness to relieve the pressure a little, but even with the buckles shortened as far as possible, there was still room for two! I remembered I had a spare which was a great deal smaller, and a quick switch over followed. In fairness to the young fella, although I offered to help, he wanted to land this un-aided, and got to work trying to prise it off the sea-bed. 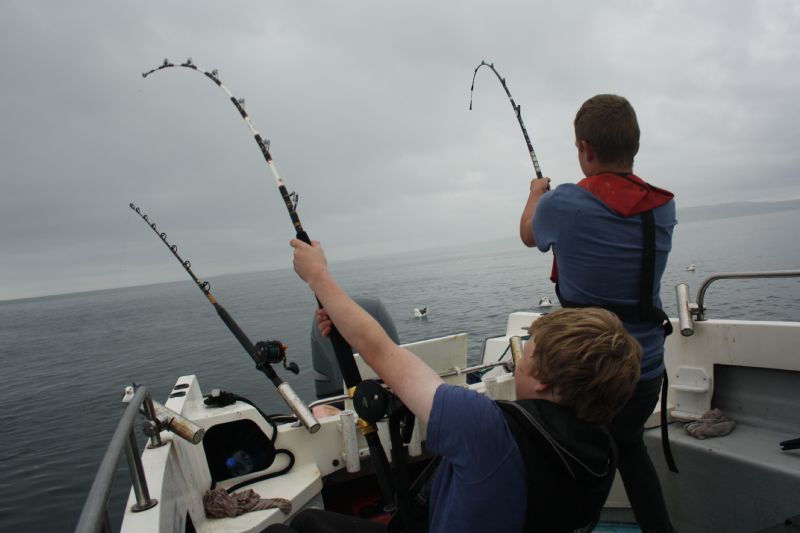 Both lads taking the strain

While still “prising”, a second rod buckled over, and John was next in the driving seat. With harness secured, and two Commons now attached somewhere below the boat, we could relax and watch the youngsters coming to terms with the momentous task of hauling these monsters over four hundred feet to the surface. A third rod signalled interest, and we almost had Skate number three for Ryan, three hook-ups which would have been interesting, to say the least. Unfortunately for us, it shook the hook within a few seconds. With the moans and groans coming from the other two, I think Ryan was quite happy to spectate for now anyway! 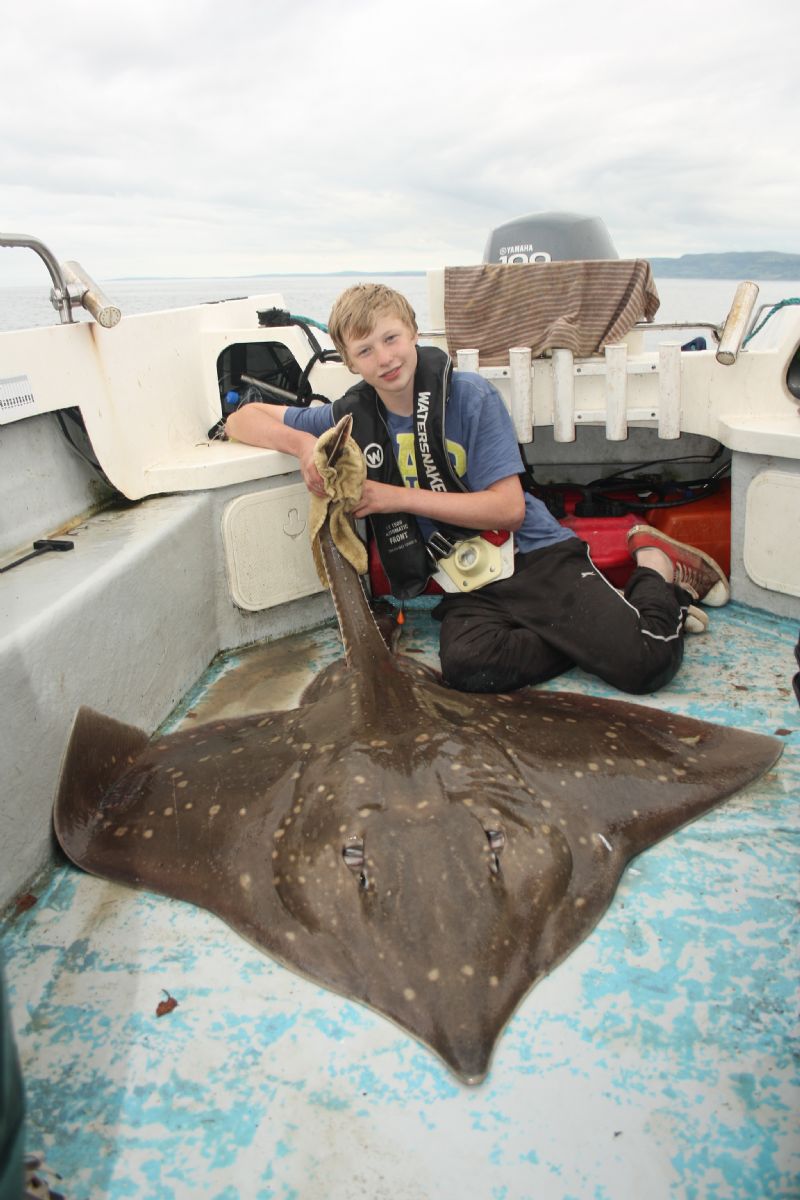 Trophy shot, Richard with a male Skate of 112lbs

After about forty five minutes, Tricky’s fish drew near and we soon had it on the deck. With John’s fish still a long way down, the timing worked out well, giving us enough breathing space to measure, tag and photograph his trophy catch, and safely release it back over the gunnels. Measurements put this fish at approximately 112lbs, a good size for the normally smaller but harder fighting male fish. What a fantastic achievement for a thirteen year old. He could now relax, and watch John go through the same pain barrier. 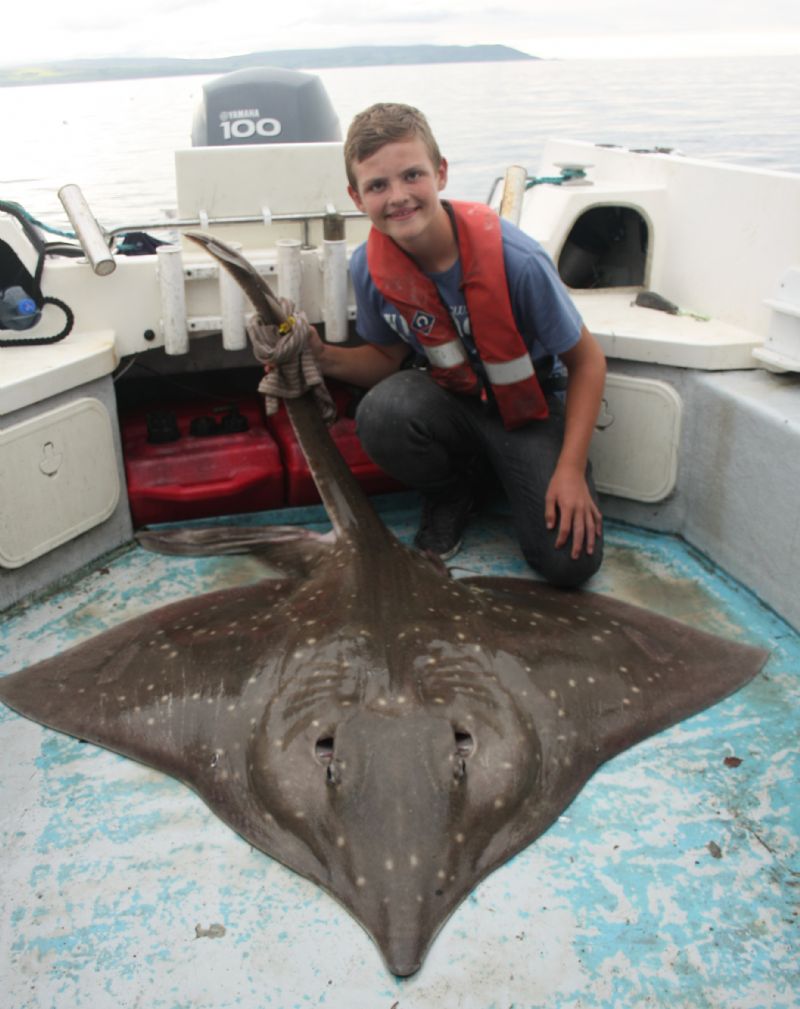 John with his Skate of 117lbs

Another fifteen minutes passed, and finally John’s fish came into view, another male of almost identical size. Safely on the deck of the boat, John’s fish was two inches longer but exactly the same wing-span measurement, giving his fish an estimated weight of 117lbs, another fabulous challenge met and over-come. Fair play to both of them.

With the tide now past its best, and the big-fish goal achieved to some extent, it was time for a change in tactics. Being primarily freshwater anglers, almost any sea species caught would be a new one for the lads. With this in mind, I headed for an off-shore reef, scaled the tackle down, and we picked our way along the deep water ledges and gullies to see what was about. Using simple baited mackerel traces, we found a great variety, with Coalfish, Dogfish, Whiting and Ling, Pouting, Pollack and the brightly coloured male and female Cuckoo Wrasse. They really enjoyed the variety of species and the fact that they weren’t quite sure exactly what would turn up next. 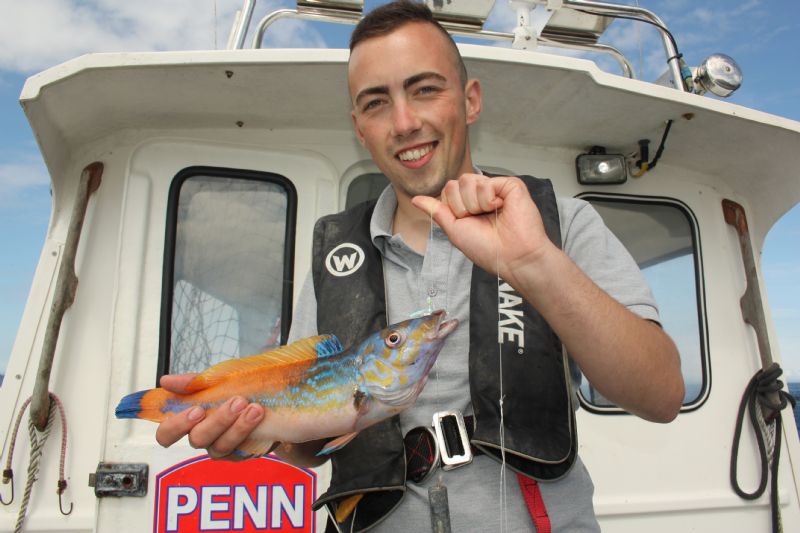 Ryan with a colourful Cuckoo Wrasse

I made the decision to keep a couple of Ling and Pollack for supper. Back on land, with the camping stove fired up, the fresh fillets went down extremely well, not a scrap remained. When I was a youngster, I was lucky enough to be invited on one or two well-supervised angling trips, and it is fair to say, these changed my life. Hopefully trips such as this have made a positive impact on the young Angling First volunteers over the years, albeit in a small way. The governments of Ireland and the UK need to think about offering even more support than already available to angling charities such as Angling First. In this way it will help to give many more youngsters similar opportunities in gaining these important life experiences.