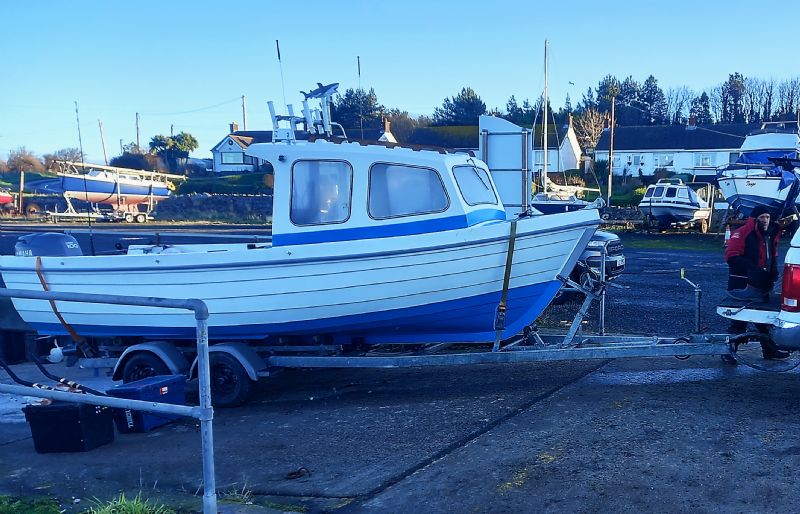 It seems like an eternity since I've had the Fast fisher out off the coast. In fairness, it hasn't been a long winter thus far, being mild right up until Christmas, but windows of opportunity have been rare enough due mostly to strong inshore breezes plaguing the Irish coastline.

The beginning of January offered one such window, and happily, in the good company of my old mate Michael Mcgimpsey, we launched and were soon back on the water to see what might be about, out in the deeps. Plenty of fresh Coalfish, a great winter bait on this venue

First stop, as always, is a quick drop for bait. Mackerel are scarce through the winter months, and quite often the summer months too these days, such is the commercial pressure placed on this precious resource. However, Coalfish are usually abundant over inshore reefs, and for deepwater angling, do just as well. Lovely to be out on the water, catching...even if it is small Coalfish and Pollock The light breeze forecast given by most weather stations was a little ambitious, as I would put it at around 14-18 knots. Thankfully hailing from the West, and offshore, it took the sting out of its tail.....but bloody cold I can tell you! Coalfish were plentiful, certainly enough for a day exploring the deep water, with a handful of pan-sized Pollack as a bonus. An hour spent over the in-shore reef was all we needed, before setting our sights on the off-shore hot spots, and lumpy looking horizon. I'm too long in the tooth to get bashed about a boat for the sake of "enjoyment", but we would take a look, and if too "bouncy", explore some inshore waters instead. Michael seemed happy with that plan! I soon found plenty of these on the light gear

Arrival at our chosen mark, conditions were far from ideal, but just about manageable, certainly well within safety parameters (so long as it doesn't worsen), always a worry when the following days forecast is for strengthening winds! Anchor down, boat holding firmly, now time for rig choice, and we won't be looking for mini species. Michael latched straight into the big stuff, strange that the sea appears calm in the photos!

Opting for one rod each for big stuff, Michael is a Shimano fan, nice kit, and with the Penn Ally-Penn 50 International combination, I'm obviously a Penn fanatic, this high end equipment is the world's best. Either way, we were well equipped for most eventualities. Whole Coalfish on standard running ledger set-ups, Pennell rigs, 12/0 Mustad "Hoodlum" heavy gauge hooks and good to go. I dropped over a lighter set-up to hunt about for anything else "knocking" about, this occasionally tempts the odd interesting species. A male Skate of approximately 116lbs, tagged and released

Picking off "dogs" and small Spurs on the light gear, kept me busy for an hour  or so, the big guns remaining silent, but the chat was good, as was the grub and coffee. Michael was first to see some decent action, a vibrating rattle on the rod tip. This can signify a large Ray or Skate landing on the bait, and shuffling about to get it near its mouth parts. Nothing for a few minutes, until a nod, then a definite vicious bend in the 50lb class Shimano. We have seen this many times before, time enough to attach the harness, strap in, clip up, and take the strain. No need for crazy "strikes", simply pile on the pressure, fish and tide does the rest. Obviously into a reasonable size Common Skate, the guy without the fish (that guy being me) is left to calmly clear the deck, wind in any rods deemed to be at risk of tangling with the fish, prepare other items such as tagging kit, un-hooking kit, camera, measure mat and sling for returning the fish, then basically relax. Not content with a specimen Skate, he followed up with a 12lb Spur Dog Michael is an old hand at this now, and skilfully played the fish to the surface in under thirty minutes, and having tagged over eight hundred Rays, Skate and Shark species for Inland Fisheries over the years, it was routine tagging on my part. The great thing now is we have moved on from the old yellow "jumbo" tags, and opt for the arrow type floy tags that are quicker and easier to apply.

Tagged, measured, photographed and returned, this male fish at one hundred and ninety one centimetres, was over specimen size, estimated at one hundred and sixteen pounds, and safely returned. We know that catch, tag, release works due to many recaptures of tagged fish over the years.

Michael was leading the way with a decent Pollack, a specimen Skate, and to rub salt into the wounds, promptly landed a specimen Spurdog. I was ahead on numbers, not much to write home about, but as I like to tell everyone.....it's a team event, not sure if anyone believes that!

Finally, a bit of action for the skipper to warm me up

The afternoon passed, overcast with light rapidly fading, and temperatures plummeting, I made the call for lines up. The sea state hadn't worsened, but equally, it hadn't improved either, and it's easier on the nerves heading for harbour in daylight during stormy seas! Of course....as I picked up the Penn Ally to reel in, the rod tip thumped, buckled over, and it was my turn to winch up a barn door. The daylight steam to harbour was now no longer an option. This felt like a decent fish, but something wasn't quite right. The tidal strength had been steadily increasing, but still, it shouldn't be this much of a struggle on the Penn gear, well matched for any leviathan in Irish waters. I began to suspect there could be a tangled fish, wrapped up in the leader leaving it to "kite" in the current. Ready for the obligatory tag, then back to the depths

An hour and a half later, and only by dropping back eight hundred feet of anchor line, we were finally close enough to haul the Skate to the surface, where he thankfully un-tangled, nose into the tide and came easily to the gunnels. Pitch black conditions by this stage, illuminated by the deck light.

A speedy tag, measure, photograph and release, catch my breath, then lift the anchor and head for harbour. Not ideal in dodgy conditions, but no major issues either. I prefer to cruise back to harbour under these circumstances. On past adventures, I've had to avoid upturned tree stumps, lobster pot ropes, beer kegs and builders planks, none of which are advisable to hit at speed in the dark, in a "big" sea! All in all, another wee fun adventure and happy result for the start of a new year.

It is with heavy heart that I share the news, that ICES, the International Council for the Exploration of the Seas, are considering reintroducing a quota for Spur Dog with a proposed total allowable catch of 17,353 tons for this year and 17,855 tons for 2024. Some quick maths, using an average weight of 8lbs per fish puts this at roughly 4.5 million Spur Dog per year, that can be landed. That will be over nine million taken from the ecosystem by the end of 2024!

Many years ago, some individuals and I took part in a lengthy campaign (over a period of eight years) lobbying politicians, taking days off work etc to help bring about some form of protection for this typically slow growing, slow to sexually mature shark species that happened to be critically endangered. On the rare occasion when someone did land a Spur Dog, on many occasions their jaws were ripped off, or ripped in half from long line activity. Long liners would drop tens of thousands of baited hooks in an area and effectively wipe out the whole shoal. Over fifteen years in my sea angling club, we never saw a single Spur Dog in Irish waters. Aftermath of commercial long-line activity in the area

Protection through legislation has seen a dramatic improvement in Spur Dog numbers, which corresponds to Common Skate numbers too, as they are known to feed on juvenile Spur Dogs. What we now have is commercial fisherman effectively calling for a cull, claiming these shoals are wiping out juvenile species and crab stocks.

Spur Dog predominantly predate on shoals of Mackerel, Herring and Sprat, if they are feeding on juvenile fish stocks, perhaps it is because the Mackerel, Herring and Sprat shoals have been so badly decimated by over-fishing, there is little fodder fish left for predators such as Spur Dog. What's next, Blue Shark cull because they are eating what's left of the Mackerel shoals, Porbeagle cull because they are eating precious Pollack stocks? It always seems to be that the fault lies anywhere and everywhere, except with commercial over-fishing! As catch and release anglers, if this goes through, which I expect it will, kiss goodbye yet again to another recreational sporting species, and a detrimental "knock-on" effect to species in the food chain, such as the critically endangered Common Skate.