A recent and memorable boat trip off the Antrim Coast began with a phone call totally out of the blue, from Mark McGivern. Mark is the director of a successful angling charity named “Angling First”. The charity, through the medium of angling, aids and offers respite to adults and children from all walks of life. This charity works tirelessly throughout Northern Ireland, raising funds to take children and adults angling, supplying tackle and transport to a range of venues, but usually the charity’s own well-stocked water in Dromore.
The reason for the call was to ask if I would be prepared to take four of his young volunteers, and himself out for a day on the water. This was his way of rewarding the volunteers for all the hard work they had put in for the charity during the year. As none of these lads were experienced sea anglers, I would be required to supply the tackle and know how, and hopefully put them over a few fish. Until now, previous local charter trips had only produced a handful of Mackerel for the lads, and they were keen to hook into something a little larger, or even just a new species or two!
This would not be a problem, and to be perfectly honest, I looked forward to the chance of wearing the coach’s hat once again, even if it was just for one day. Over the last couple of years, I have learnt that there’s a great deal of satisfaction to be gained when it comes to giving something back to the sport. Especially when the young anglers are eager and willing to learn. 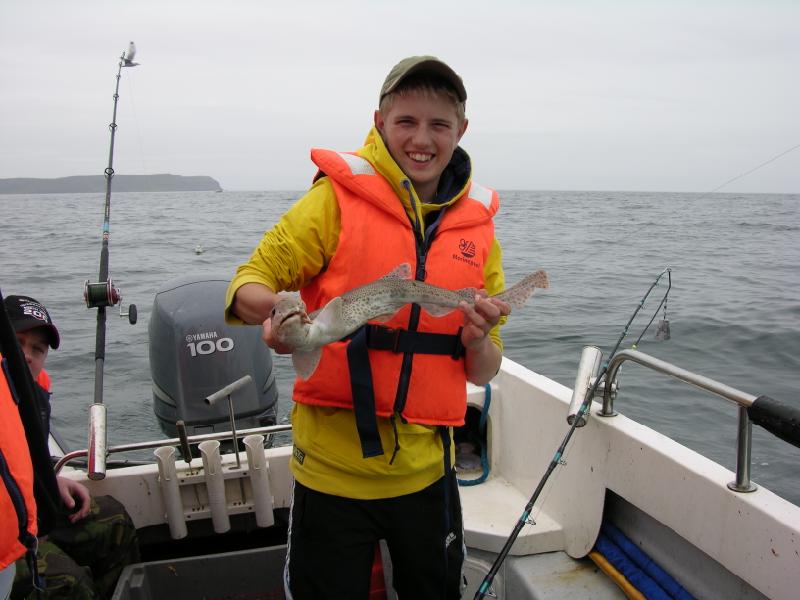 Following several postponements, due to our usual unsettled weather, a fair day with light winds beckoned, and hasty arrangements were put in place, and we agreed to meet at a harbour on the North Coast. In fairness to Mark and the lads, with precious little notice, the well-organised crew were able to jump at the drop of a hat. My angling mate, George Hill made the effort too, in his own boat, as a back up safety boat for which I would like to thank him. Although I have a medical kit, flares, fire extinguisher, throw rope, spare life jackets and a V.H.F radio, it is reassuring to know another boat is close at hand. On arrival at the harbour the following morning, in no time at all we were all soon safely aboard. Through Mark, I was introduced in turn, to Eoin Donnelly, Tom Deering, Matthew Wright and Andrew Michaelides, all carrying on and “raking about”, in standard teenage fashion. I had already met Andrew during a “day with the doc” article last year, and knew him to be a very dedicated young angler. It was great to see that he was still as keen as ever. 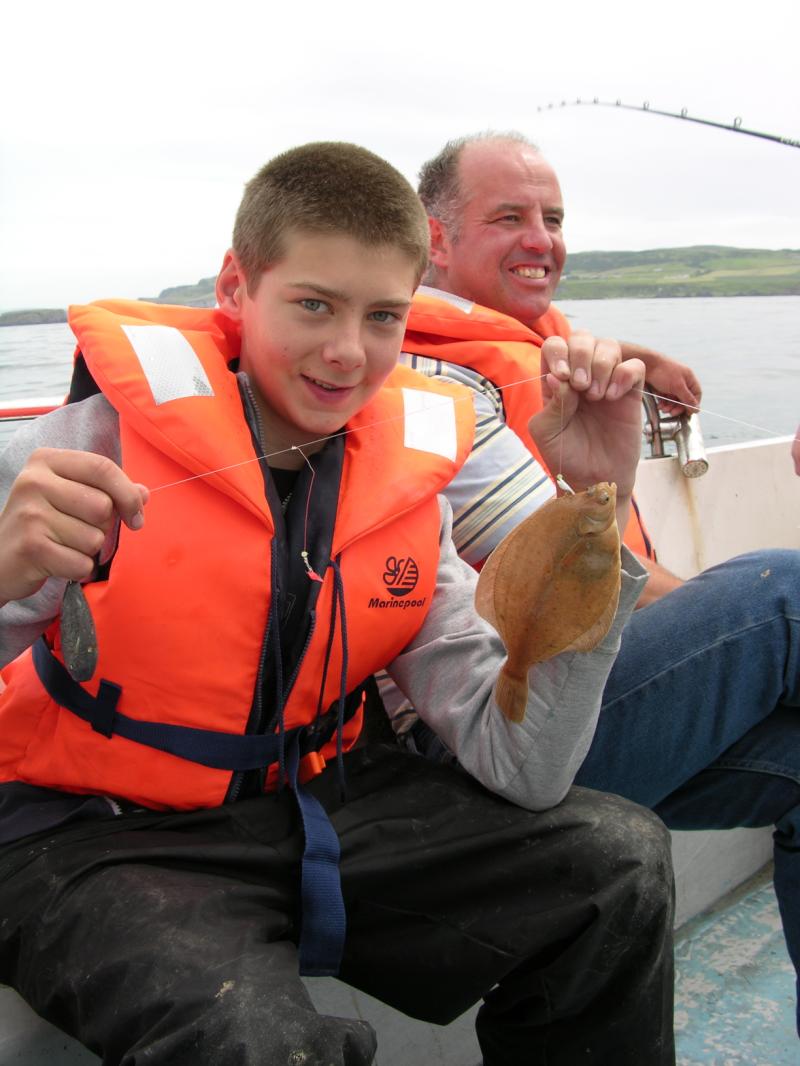 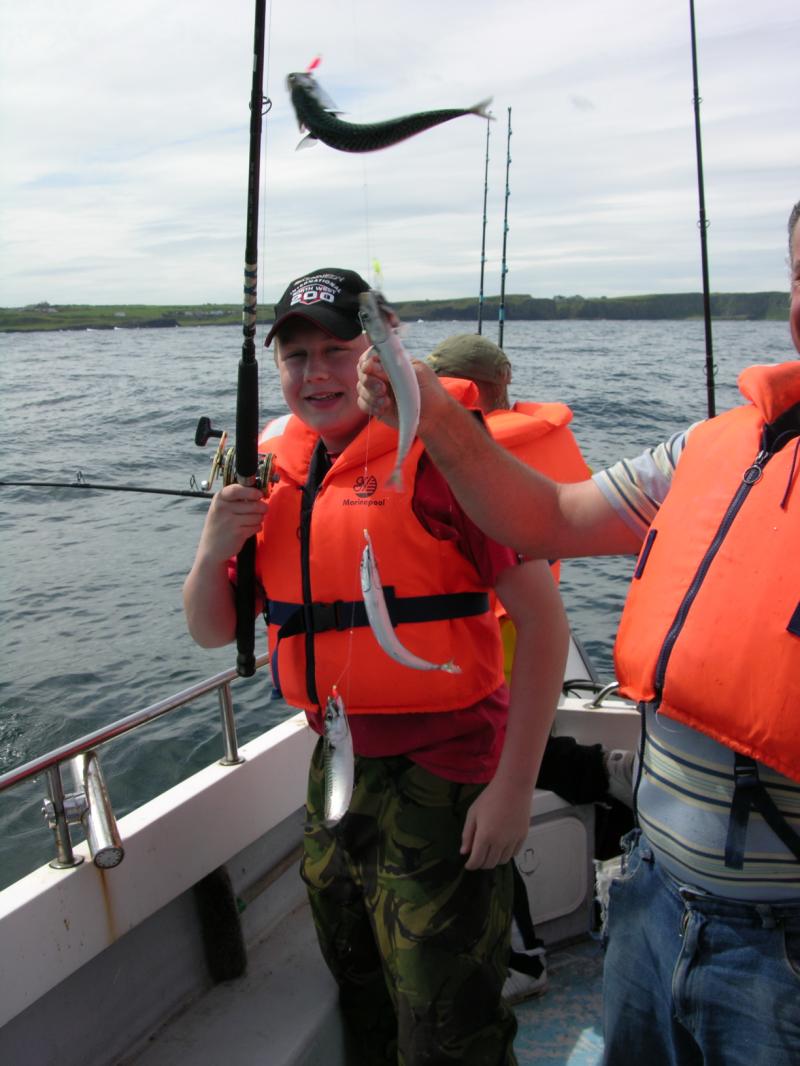 Mackerel were abundant, along with some surprise Dabs

I had to laugh when Mark sternly read out the angling Ten Commandments. I didn’t quite catch all the rules, but whatever they were, they soon shut up and sat quietly! All kidding aside, angling should be fun, but there is a serious element of danger on the water, as we are all well aware, and ground rules need to be established early. First drop was for Mackerel, and plenty were needed for the day ahead. At first the shoals were elusive, but we were soon into full swing, with plenty of Mackerel laden traces flying over the gunnels, and ear to ear grins directly behind them. While they carried on filling the cooler box, I studied the chart plotter, wondering where to head next and which species to target. Whiting and Grey Gurnard were abundant below the Mackerel shoals, and constantly filled the bare hooks that the Mackerel had missed. It was then, when I heard one of the lads say “Hey, Terry! What’s that fish called?” looking round, Mark was about to grab and un-hook a Weever fish. I yelled at him not to touch it and as he jumped back, the dorsal caught him on the back of the hand. For one awful moment, I thought the trip was over before it had started! Luckily, the Weever fish had not been able to inject any venom, and I was able to explain the dangers of this little, insignificant looking fish. Holding it by the lower jaw, with the poisonous black dorsal in full view, it was carefully un-hooked and released. Although a poisonous species, Weever Fish should be carefully un-hooked and returned

To be honest, I never thought to pre-warn the anglers regarding Weever fish, simply because they are a reasonably rare catch in this area. I wondered if charter skippers ever mention this to new-comers to sea angling. I know that I was never told about them, but had certainly read about them and the painful consequences of being stung. The sting is not usually life threatening, but angling friends that have been unlucky enough to be caught out, have told me it’s the severest pain they have ever experienced. Certainly enough to ruin a days angling! Luck was on our side, and with a lesson well learnt, we were able to put the experience behind us.
By this stage, we were quite close to a sand bank that had produced rays and Spur dog the week before, and I asked Mark if they fancied a go for these. He replied that it didn’t matter as they had already caught more fish and greater variety of species than any previous trips, and anything from now on would be a bonus! It really seemed like these guys were starved for a decent day sea angling.
I threw the anchor and swapped the Mackerel traces for heavy duty running ledger rigs, then showed the lads how to cut and prepare ray-sized fillets, and explained the importance of dropping the rigs slowly to the seabed to avoid tangles. They listened intently and carried out instructions to the letter, and were proving to be a great bunch of budding sea anglers.

Rod-tip rattles soon appeared, and I hid my groans, as Dogfish were quick to find the fresh Mackerel baits. On the other hand, this was another new species for the guys and they were delighted to see these numerous mini-sharks. I had forgotten how I had once felt, as a young lad catching my first Dogfish, and needed to adjust the mind set to how it must feel, catching new and interesting species for the first time. After an hour or so, it was obvious that this mark was only going to produce dogs, and so, I suggested a change of scenery. The tide would soon be perfect for some offshore Pollack fishing over a local reef. While everyone busied themselves with the Dogfish, I quickly set up flying collar rigs, some with long thin strips of Mackerel, and others with artificial Red Gills or jelly worms. Once ready, and with the anchor lifted, we were on our way to the offshore reef. 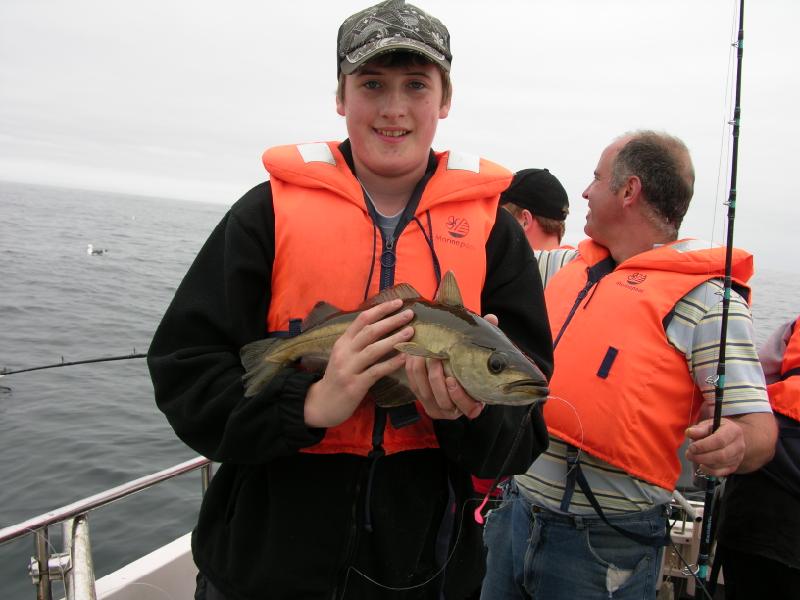 Tom is delighted with this small Pollack

Stunning little Harbour Porpoises gave away their presence every now and then. Their bronze backs shining in the sunlight as they broke the surface. Between these and the occasional Puffins that struggled to take flight, the twenty-minute journey passed in no time at all. As is always the case with Porpoises, as soon as I lifted the camera, these shy mammals vanished before I could take a shot!
We were now over the deep water reef and the instructions were simple. When I gave the word, the flying collar rigs were dropped to the rocky seabed, and then very slowly retrieved. After thirty turns of the handle, and no takes, repeat the process. If a fish showed interest, DO NOT strike, but simple carry on slowly reeling until it hooked itself. This worked a treat, and over every short drift, Pollack and the occasional Coalfish hammered into the artificial lures. The beaming grins showed me that this was another new experience and they couldn’t get enough of it. At one stage, all five rods were bent into fish. 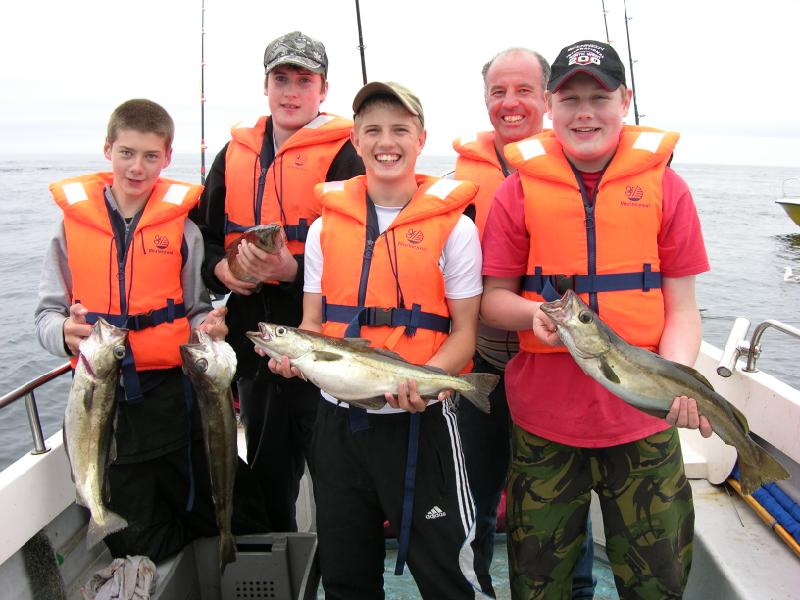 Pollack never fail to put a grin on your face

Unfortunately the Pollack could not be returned from such deep water, and I was well impressed that the lads did not wish to keep too many. Once they had landed two or three each, they were happy to see what else could be caught. It was refreshing to see, that many of today’s’ young anglers have that important conservation streak within them, and realise the damage over-fishing can cause.
A move to a shallow part of the reef produced Coalfish and one particularly fine Cuckoo Wrasse for Andrew. On the scales, it missed the specimen weight by an ounce! As the tidal strength increased, another move was called for. At my suggestion, we headed inshore to fish the opposite end of the bank targeted earlier, with the hope that the dogs had moved on. A few chopped Mackerel in an onion sack were added to the anchor chain and the boat swung round in the tide as the anchor held fast. A few Dogfish did make an appearance, but not in the numbers earlier. Whiting, Gurnard, Mackerel and Scad showed, but thankfully no more Weever fish! 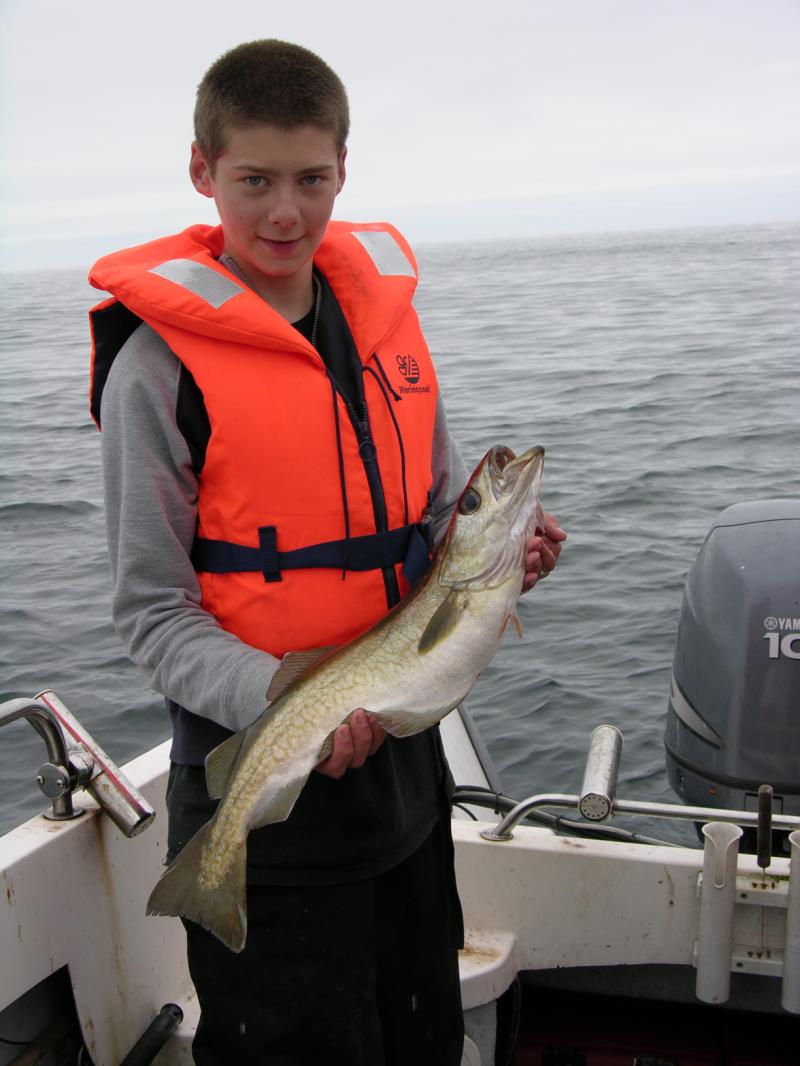 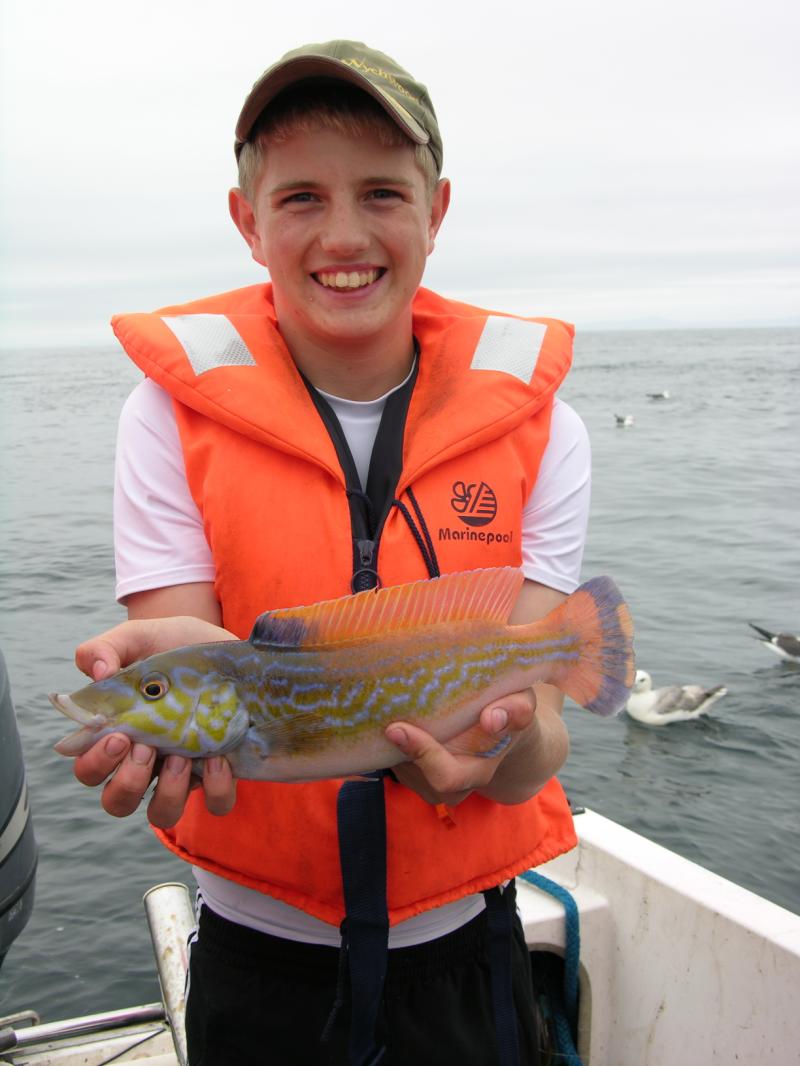 As a last ditched attempt to find a new species, I baited two of the rods with small Whiting. Andrew had kept a couple put aside as future Pike baits, but I had a more immediate use for them, hoping to find one of their major predators in this area, the Spur dog. Towards the end of the day, as it was nearing time to head for harbour, Eoin lifted into a positive rod thump and successfully played a four pound Spur dog to the surface. All had been pre-warned this time, regarding the razor-sharp spines directly in front of each dorsal, and this time, there were no potential casualties. The lads were delighted with this new species added to their list, and to top it all, the last rod to be retrieved was Andrew’s, and he was obviously struggling to bring his fish to the surface. As I stood with the landing net at the ready, another Spur loomed from the depths. This one hit the ten pounds mark and finished the day on a definite high.

Back at the harbour, what looked like a mini fish market developed, as the lads filleted their Pollack, while I sorted out the boat and winched it back on the trailer. It was hilarious listening to them argue over who caught exactly which fish, and hearing the buzz of contentment, as they chatted about their day at sea.
Chatting with Mark several days later, he told me that on the way home that night, the car was stopped at a routine police checkpoint. When the officer asked where they were coming from, one of the lads said they were fishing, and they promptly rhymed off the list of species, including Whiting, Gurnard, Scad, Mackerel, Weever fish, Coalfish, Pollack, Dogfish, Cuckoo Wrasse, Dabs and Spur dog, “and if you don’t believe us, stick your head through the window and smell”! Apparently the officer declined the offer!