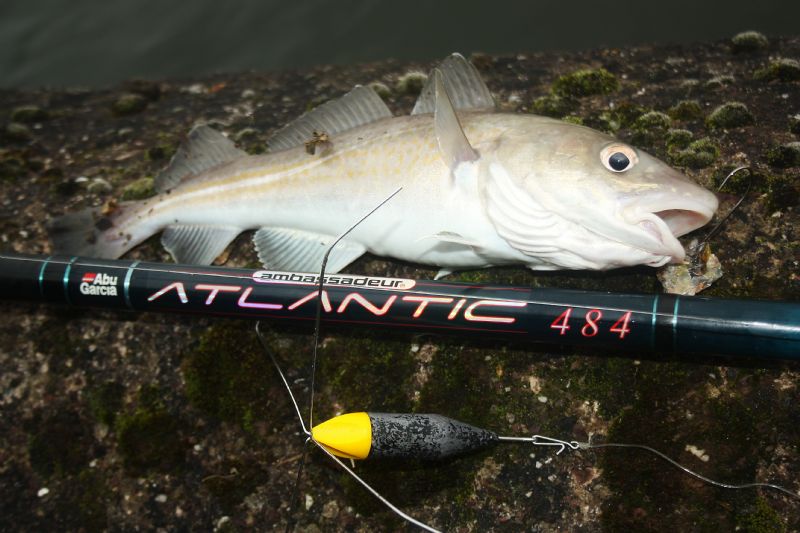 I recently had the opportunity of three days’ work down in County Cork, and of course, couldn’t leave home without the rods!

With the work soon behind me, it was time to have a look along the coast to see what was about.

I say “have a look” but in reality, I rang my good friend Sid Kennedy and asked him what was happening locally. Sid has his finger on the angling pulse, and usually when I give him a call, the current angling information is always impeccable.

On the way down the country, I had taken a minor detour through Dublin and purchased sixty peeler crabs in the hope that large Flounder would be the target species. However, Sid soon informed me that although a few “flats” were showing, there were very few about in the specimen range, 2.5-3lbs. Most were averaging 1-2 lbs (which would be considered excellent by Northern Irish standards!). Although the Cork Coastline is an extremely prolific shore-angling venue, without large Flounder available, the alternative options in December are some-what limited. 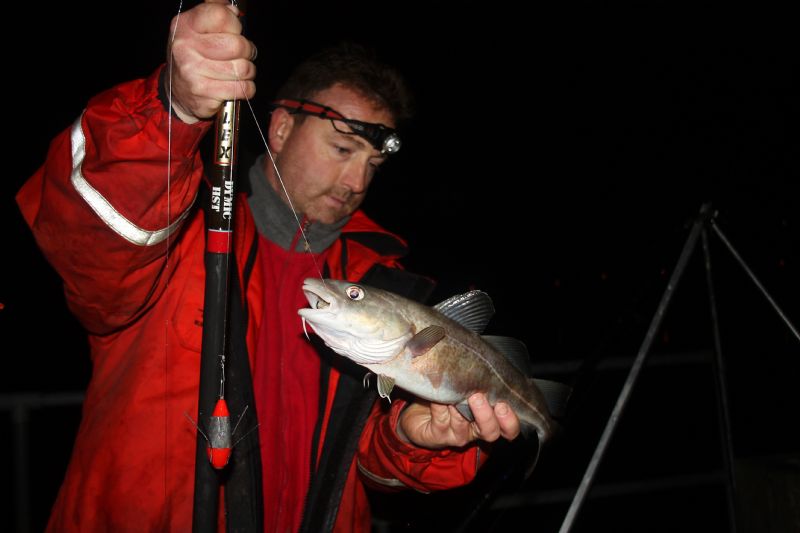 Sid with a nice Codling from Cork Harbour

He suggested I forget my usual specimen hunting routine and target the Codling showing on shore venues around Cork Harbour. I then realised that I had never actually fished the famous Monkstown venue, “the wall” as I have always heard it called, and this wet my appetite. A new venue is always an interesting option. 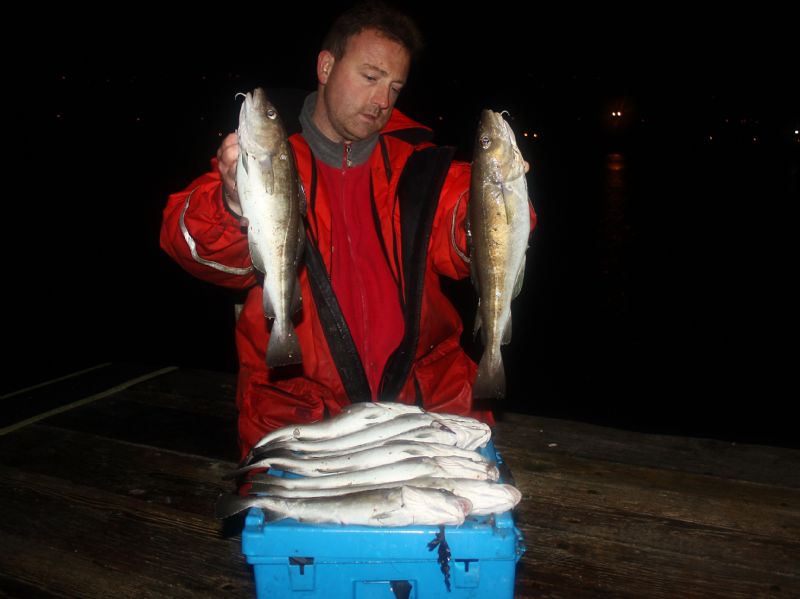 Having returned most, we kept these between us

That evening, I called down to see Sid and the gang and the codling were about in great numbers. I hate to harp on about it but the North Coast angling was once like this, but commercial over-fishing has successfully taken all but a few stragglers. Cod for me are normally a rarity now! I know most of the lads here and they are a great bunch of guys, Sid, “Mossy”, “Dobs” and Ross, all enjoying the banter and regular rod-tip rattling Cod bites. I would love to have this quality of angling back home. Maybe then, the beach rods would get used a little more often, and not just when I venture south of the border! 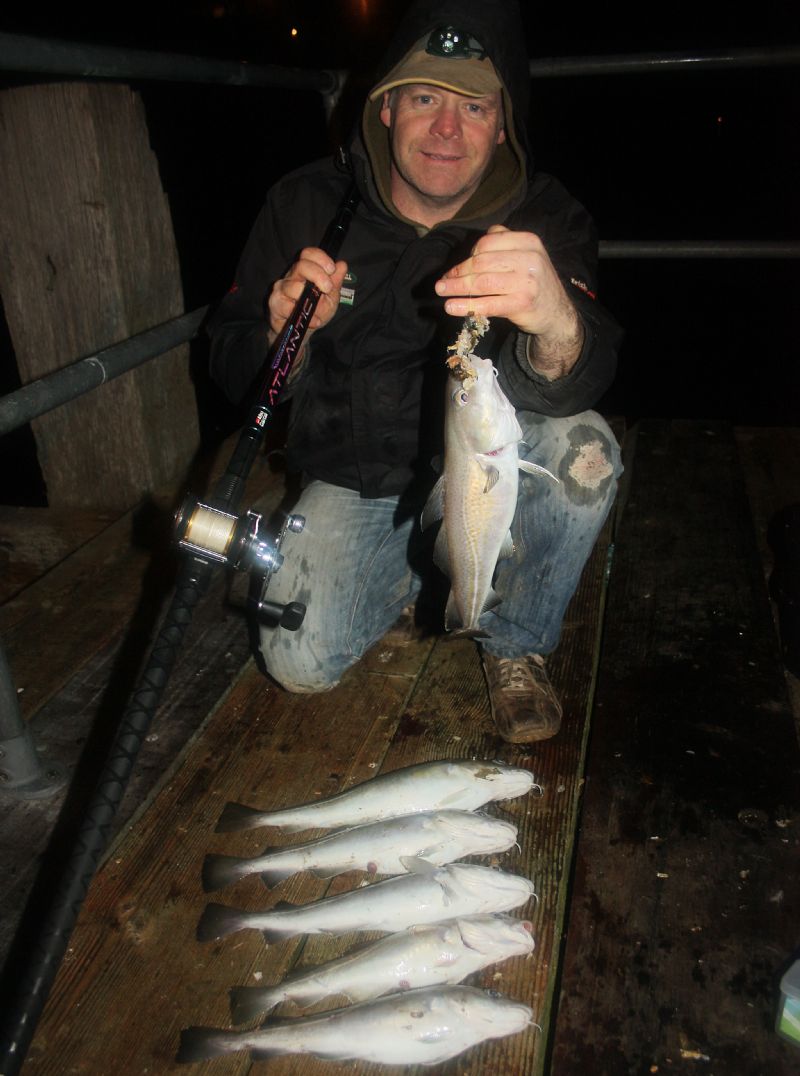 I joined in, and the Codling soon obliged, taking large crab baits on a clipped-down Pennell pulley-rig, blasted out at distance with the Abu Atlantics. The "splash-down" bait clips are a god-send, holding a baited hook for aerodynamics, and releasing the hook on every occasion, simply infallible! They can also be used with any lead weight, great idea. Using braid for main line, the bites were a great deal more dramatic than the ones on mono. The only downside was lack of “cushioning” in the fast tide and having to use slightly larger grips to hold bottom. 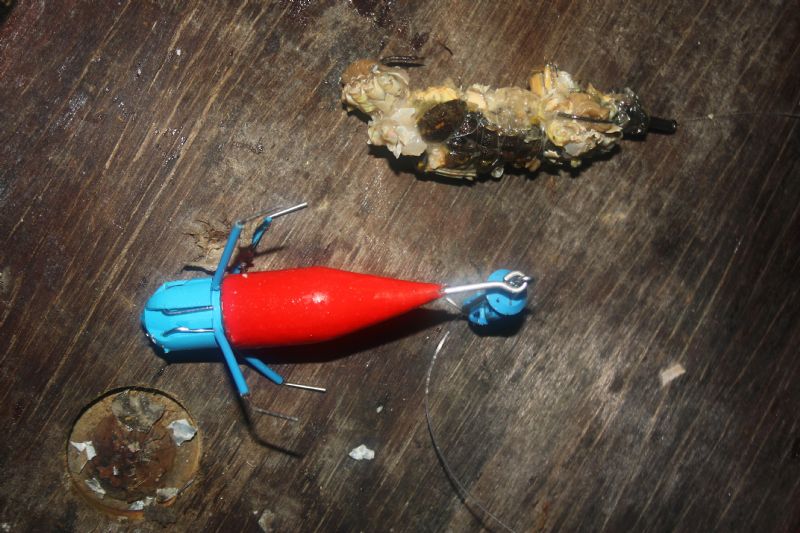 Peeler crab on a Pulley-pennell rig, the Gemini splash-down clips are un-beatable for distance and release

We kept any fish that looked a little worse for wear, and put back many others. Our “keepers” certainly won’t be wasted; as Mossy has a deadly recipe for Tai fish curry and I could hardly wait to sample it. Staying at Ross’ father’s fabulous house for the night, Mossy got to work on preparing our evening meal while Ross and I stayed out of his way, a few Millers to keep us occupied. I would love to recite the fish curry recipe, but in all honesty, I don’t think Mossy stuck to hard and fast rules anyway. He’s a kind of “suck it and see” chef going on the belief that when it looked good and tasted good, it was ready. Nothing wrong with that! 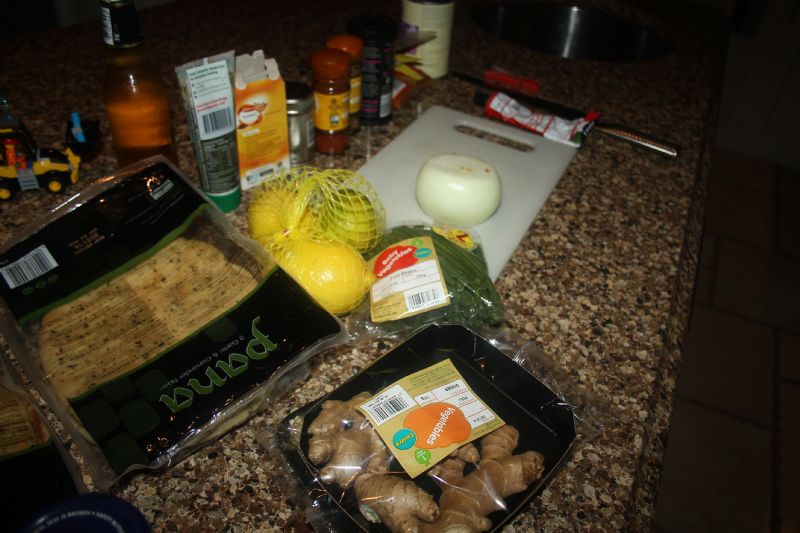 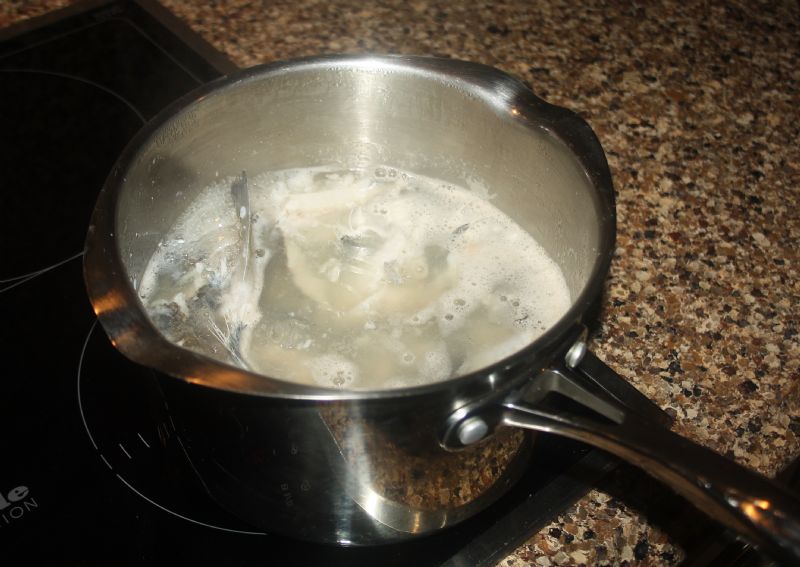 Using the fish carcasses for stock and some of the ingredients

A few lagers later and a bowl of grub was dished up, that looked and smelled amazing, seconds and thirds were had by all. There is absolutely nothing like fresh caught and cooked fish if it is carried out in a sustainable manner. Mossy, cheers man! 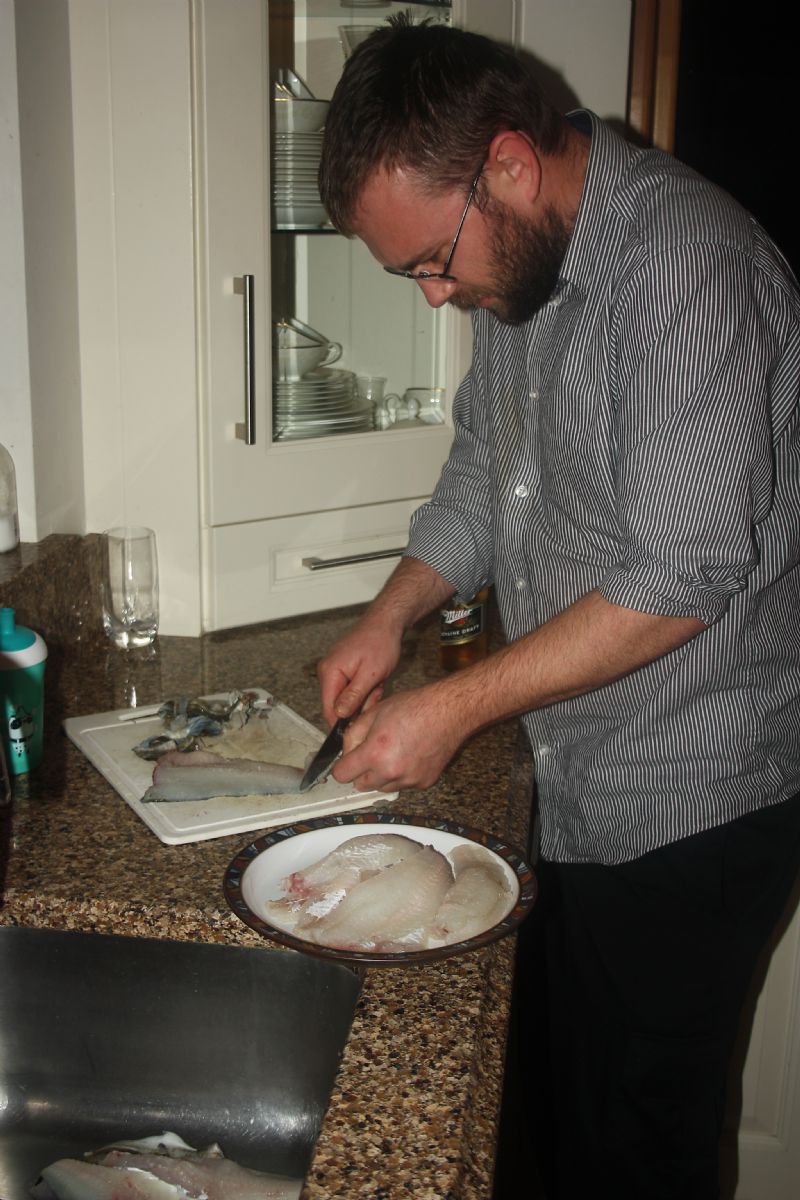 We left Mossy to it, too many cooks spoil the broth, and all that! 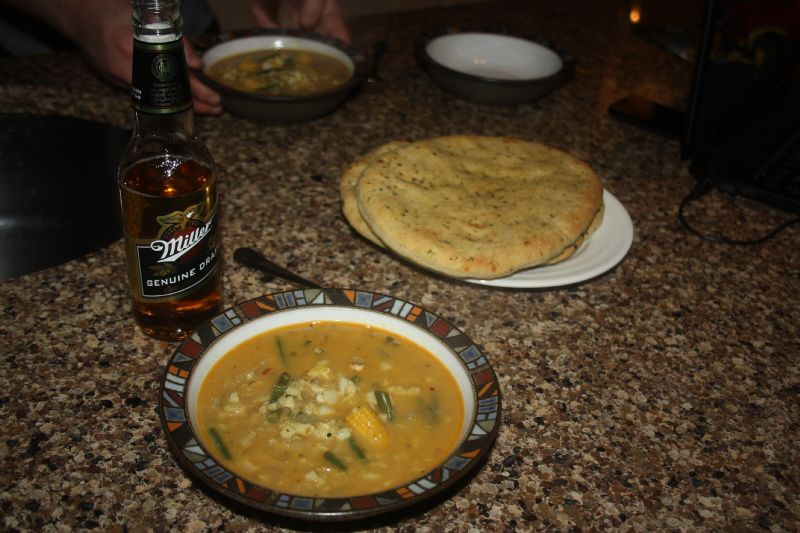 Cracking grub, courtesy of Mossy, and the hospitality of Ross and his father, cheers lads

The following day was home time for me, the arduous 5-6 hour journey north, but with a few fresh peeler crabs left, I couldn’t resist a final couple of hours bash at “the wall”. I would be on my own this morning as the lads all had work to go to, so I headed to another mark along the venue that Ross had suggested. 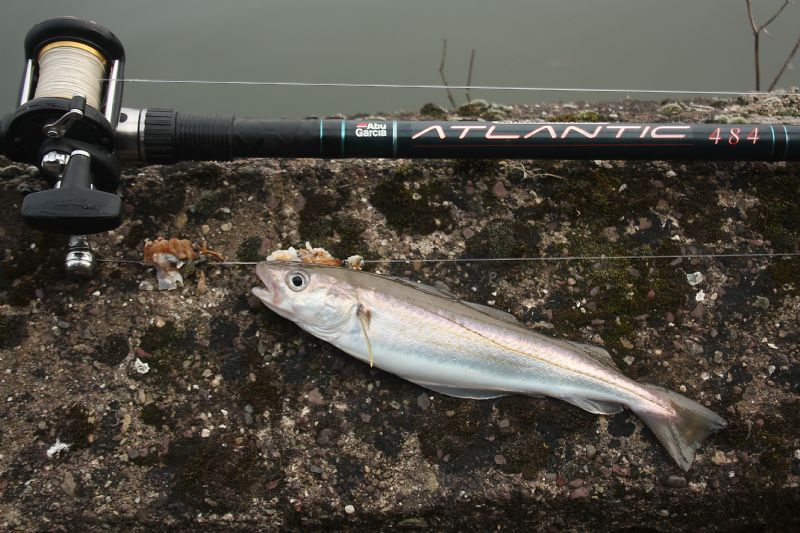 Thankfully only a couple of smaller Whiting stole my crab baits

This was easy angling, stepping out of the car and walking a few yards with the gear. Using the railings, I didn’t even bother setting up the rod rest! I chose to fish one rod at distance to see if any of those coddling were about and one rod close in. This mark is well known for huge Three-Bearded Rockling (hard to shake the specimen bug!) and a bait close to the wall can sometimes sort them out. 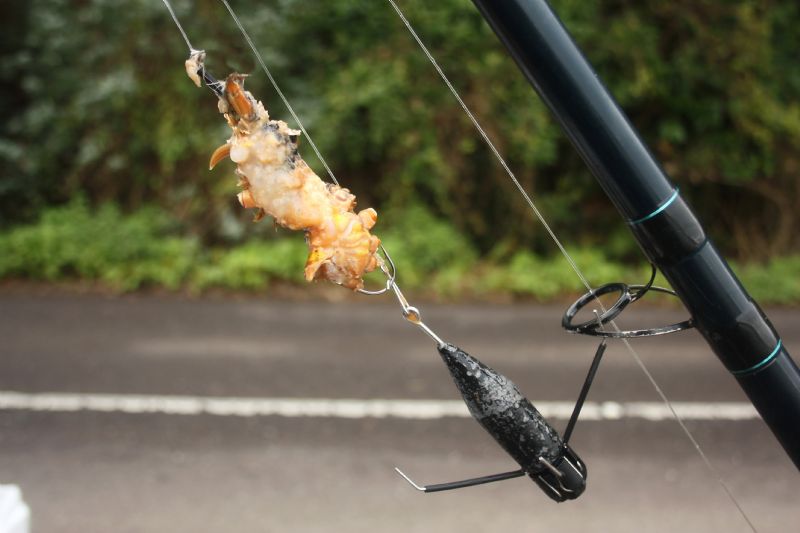 Juicy crab bait ready to go, Gemini leads are perfect to hold fast in the tide

To hold bottom in the fast tidal current required a 7oz grip lead, and counting down, I was amazed that it took 24 seconds to hit the sea-bed. I could immediately see the attraction of this deep-water estuary. It wasn’t long before the Atlantic rod tip nodded and I was into my first fish. Baring in mind this was bright daylight, it was pleasantly surprising to see a fat codling break the surface. The deep-water obviously allowed the Cod to feed with confidence.

As the tide increased in strength, I changed the Gemini head for better grip

I could only stay for a couple of hours or so, but in that time managed to land seven fine Codling, and a couple of Whiting, keeping four of the plumper fish to take home with me. The “Rockling” rod gave a serious rattle and I thought for a second I had cracked the Three-Beard record! However, a fighting fit Ballan Wrasse broke the surface, in December? Being a northerner, it is difficult to accept finding species such as this when they have normally vacated the colder northern waters long ago. 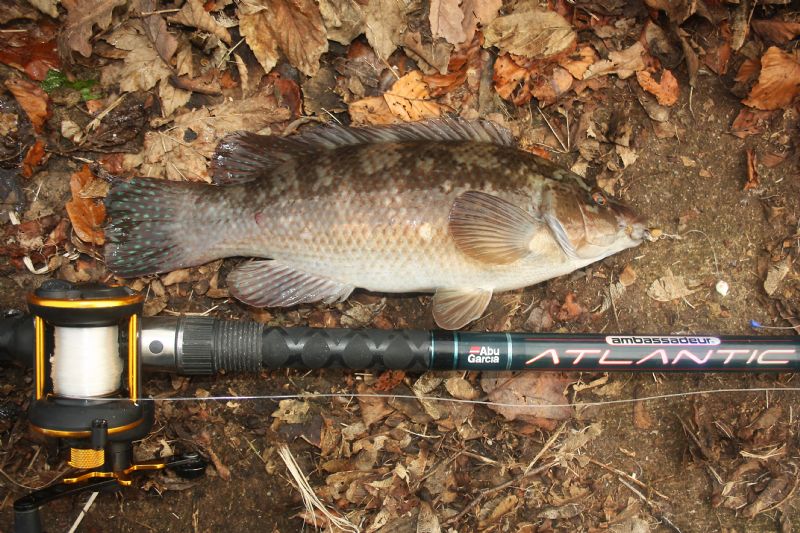 I so hoped this was a Rockling! Never mind, never sorry to see a Ballan Wrasse

Well that describes my two short shore-angling sessions in Cork harbour, and extremely enjoyable they were too. The “Monk Wall” was famous for large Cod, sometimes well into double figures. Those days are gone now due to commercial pressure, but it is fabulous to see that a good days angling can still be had in that part of Ireland. One day perhaps, our authorities may wake up and implement Marine Protected Areas on in-shore marks around Ireland, and venues such as Cork Harbour are screaming out for such schemes. With suitable protection in place, can you imagine how fantastic these marks would be, generating hundreds of thousands of Euros from angling-based tourism. Those figures are realistic, we just need our governing authorities to be realistic also! 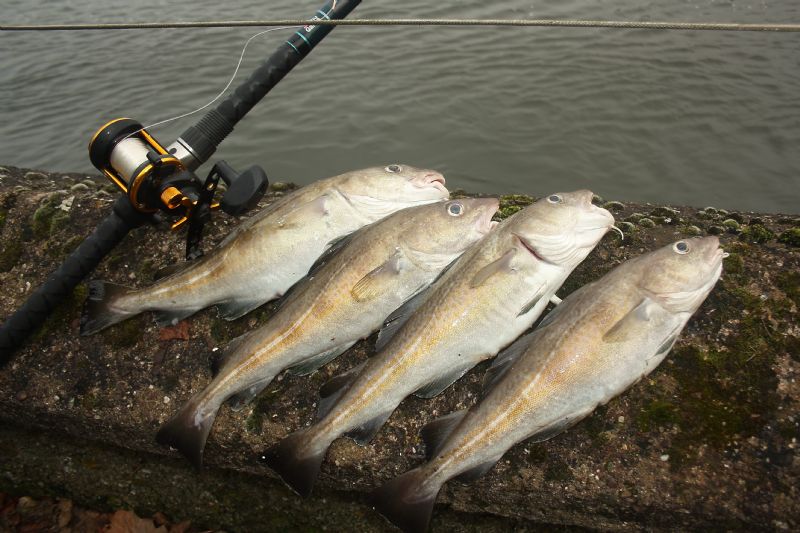