Does size matter? By Mark Corps

Right! A good place to start is with facts: Irish pike grow large, and quickly because they eat a high protein diet. As all good school boys know, the main-stay of this diet is fish. Though, as we have shown previously from research carried out by Dr Martin O’Grady, pike have no problem feeding on a smorgasbord of smaller creatures, if and when the opportunity arises.

When starting to fish for pike with the fly, (now a decade ago) I brought with me a key philosophical approach from trout fly fishing – ‘match the hatch.’ Therefore accepting that fish make up the mainstay of the pikes’ diet, the next question was which fish and what size?

I was informed by a number of piking ‘oracles’ that pike liked / fed on, trout, perch and roach – in that order. So I tied appropriate looking flies that gave at least a hint of the fishy characteristics mentioned.

I used commercially bought flies as templates (most in the 5 - 8 cm range). To my novice pike fishing eyes they were similar to very large salmon flies. Using these fish-suggesting flies, plus some horrendous, garish things that bore no resemblance to creatures from this or any other world, I had reasonable success. Strangely a perch fly became a banker, even in waters devoid of perch. Interestingly overall, I found a non-fish looking bright chartreuse fly my best and most consistent catcher. These gave me productive sessions. One November afternoon on Lough Muckno near the Black Isle, I stopped to fish for an hour or so. I noted half a dozen ‘dead baiters’ fighting off hypothermia by the bridge. Starting to fish at the slip-way and wading toward the bridge, I took half a dozen pike up to 15lbs in about half an hour.

It became apparent that not only was I attracting pike but also my fellow ‘brothers of the angle.’ They moaned, having had only one run all morning and were in near disbelief that I was moving so many fish to the fly. As you can imagine, they were keen to find out what exactly I was doing and how it worked.

However, success also caused me frustration. I was catching lots of fish but no really ‘big girls.’ Chatting with the renowned pike guide, Alan Broderick I bemoaned this fact - lots of fish up to about 12 – 15 lbs but nothing larger. Alan smiled and asked me to get out my largest fly.

From a box I produced a fur and feather concoction of some 10 cm in length. To me as a former trout man, a monstrous creation! Next to this Alan put down a wooden fish-shaped lure some 40cm long. It was festooned with large trebles and bore the marks of large teeth. He told me that this was one of his best trolling lures and so far that season had accounted for fish into the 30lb bracket. We looked at the fly and the lure together. Alan simply stated ‘snack and lunch!’

I got it; size is an issue for pike! This conversation was the catalyst for numerous fly tying experiments and discussions with fellow pike fly fishers. I tied larger flies up to 15cm and I began to bump into larger fish more regularly. Then 3 years ago I had the pleasure of sharing a boat with Andy Bowman – a very experienced Scottish pike fly fisherman. One bright day on a midlands lough, I watched with interest as Andy hurled one of his creations into the distance. His green fly ‘Van the man’ was about 25cm long, (see picture 1). Andy is one of those fishermen who thinks ‘outside the box’ and is willing to ‘give it a go.’ It was apparent that what I considered to be large flies were certainly not large in his world. 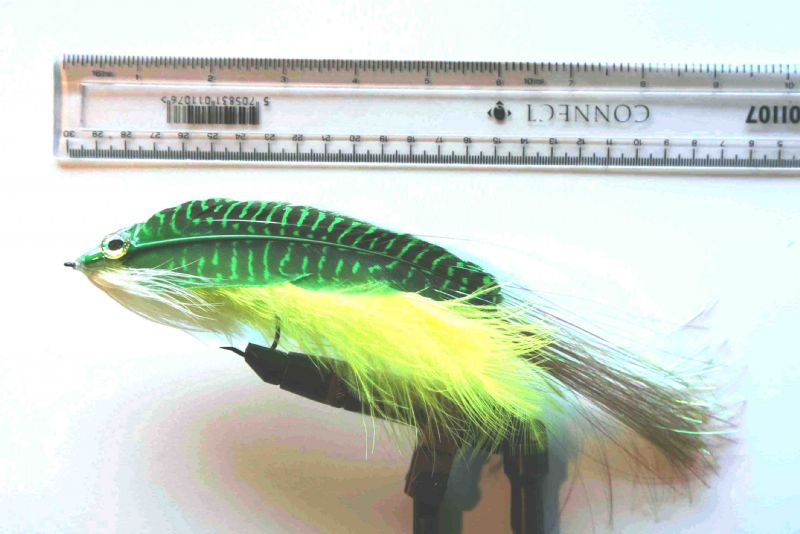 But how big does a fly need to be and can one be too big?

From on-going work (started in 1978) by the Central Fisheries Board, now Inland Fisheries Ireland (IFI), on pike from Lough Sheelin it has been shown that as pike increase in size their initial catholic diet becomes more specific (graph 1 & 1 a). Fish, as a component part of the diet, rise from 26% in pike smaller than 39.9cm, to over 80% of their diet, when pike attain lengths over 60cm.

From the data one can see perch and roach are the two most important fodder fish, this reflects their abundance in the lake. Trout make up a significant component of their diet, even when the trout population is at a low level.

The results suggest pike are semi-opportunistic feeders taking any available fish species; dietary abundance reflecting the population structure and biological availability of the fish species in the water. And from looking at the size of fish found in the stomach contents (graph 2) it would appear that the optimum size of prey would be about 26 cm.

26 cm is a large fly – have you tried casting one of these?

This size of fly also has associated problems:

My initial problem was finding materials to make flies long enough. Finding some wigs in a joke shop I decided to use them. So was born the ‘Ra Ra girl,’ 22cm of tinsel with no resemblance to any sort of fish.

The ‘Ra Ra’s’ introduction to the world of piking was on Lough Arrow. Fishing with Terry Jackson and Gardiner Mitchell (three in a boat), I took the first go on the oars. After a fishless hour Terry took pity on me and we changed roles. I tied on a ‘Ra Ra girl’ to hoots of derision. Worse when casting, the fly whistled through the wind – more abuse!

My first cast and the fly landed only 15 meters from the boat. A couple of pulls and I found myself connected to a nice little pike of about 8lbs. The laughter stopped but only momentarily, as when the fish was bought to the net it was in a cloud of shredded tinsel. The pike could be seen chewing away at a disintegrating fly. The material was long enough but not strong enough! If 26 cms is the ‘Holy Grail’ in relation to the ideal pike fly size. What are the population / abundance of large crocodiles?  From graph 3 aone can see that about 80% of pike sampled were below 80cm.

This makes sense as one would expect a reduction in the numbers of pike in a year class annually, through such factors as disease. So each year there should be fewer and fewer fish until eventually there is just a handful of old (and hopefully large fish) remaining. So proportionally one is likely to catch smaller fish more than large specimens. So were does this leave us?

To attract one of the big crocodiles from the depth, fly wise it would appear the bigger the better. Obviously large fish prefer large meals so something around the 26cm mark (or even larger) should do the trick and do not worry too much about the colour. I do not see these large flies becoming the norm but maybe it would be worth having one to try on the odd occasion.  Stick with the wee flies and remember you might still get the odd big girl – but it is worth remembering the concept of ‘snack and lunch!’

Our thanks to Dr M. Grady of Inland Fisheries Ireland for Kind permission to use the data.