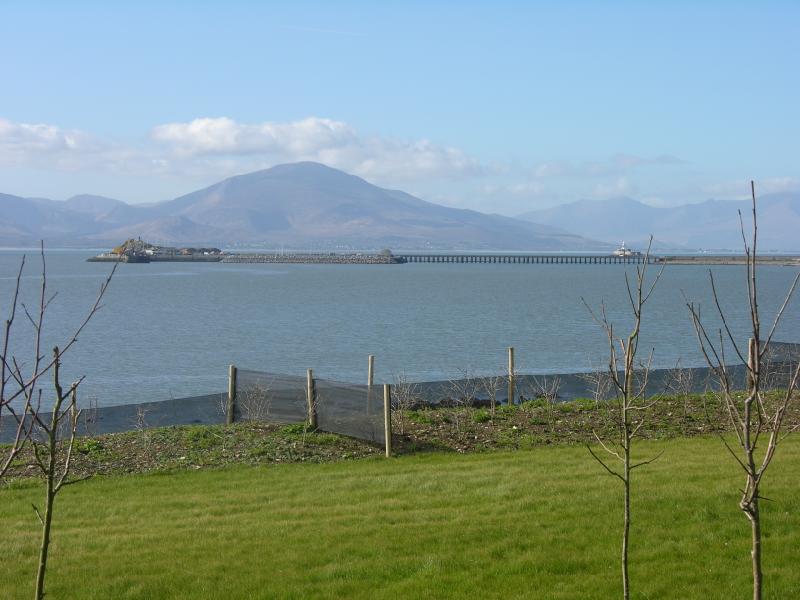 Fenit Pier was constructed in eighteen hundred and eighty, and built on and around the Great Samphire Island. It is a large sheltered harbour that stretches half a mile offshore into Tralee Bay, and is connected to land by a road bridge, known locally as the “viaduct”.

A railway service once operated here, ferrying freight to and from the harbour, but this closed down in the seventies.

This is a large and busy harbour, but allows plenty of room and opportunities for the shore angler to target spectacular catches throughout the year. The shape of the pier is such that angling activity can be undertaken in most weather conditions. Being able to fish from the north, south, east or west will give some degree of shelter from any wind direction. When large ships are moored at the harbour, the end of the pier is closed to public access, but this is not a regular occurrence. 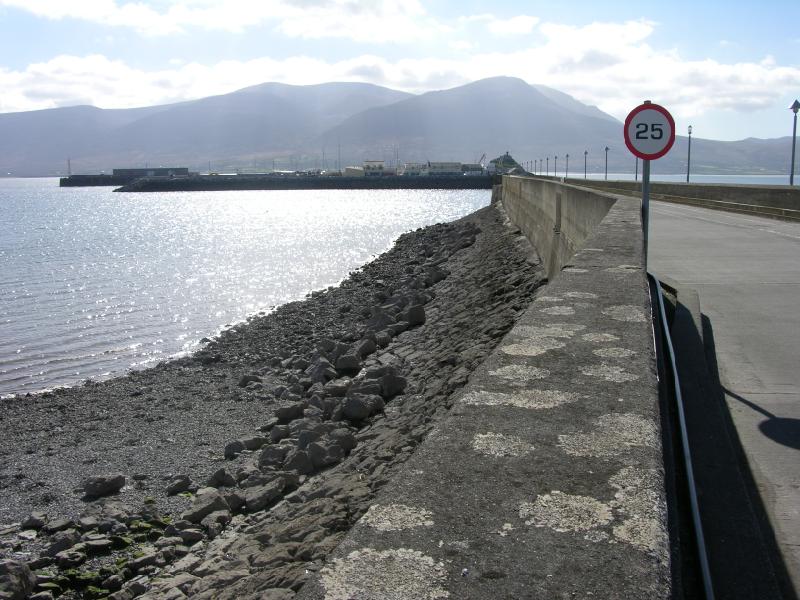 This is the start of the bridge, known locally as “the viaduct”.

It is fair to say that this can be an all year round venue, but really kicks off through the summer months when ray begin to show. The month of March is probably worth avoiding as angling is at its quietest here, much the same as most shore venues around Ireland. April / May can be excellent, with Thornback and Undulate Rays making an appearance, along with Dogfish, Flounder and Plaice. Summer months produce Mullet and Conger, with Scad, Mackerel, Pollack and Garfish showing slightly later.
Fish can be caught throughout the tidal range, but better on a moving tide, either flood or ebb.
Night- time is very productive, possibly due to the lack of traffic over the bridge, which seems to put the fish off during the day. 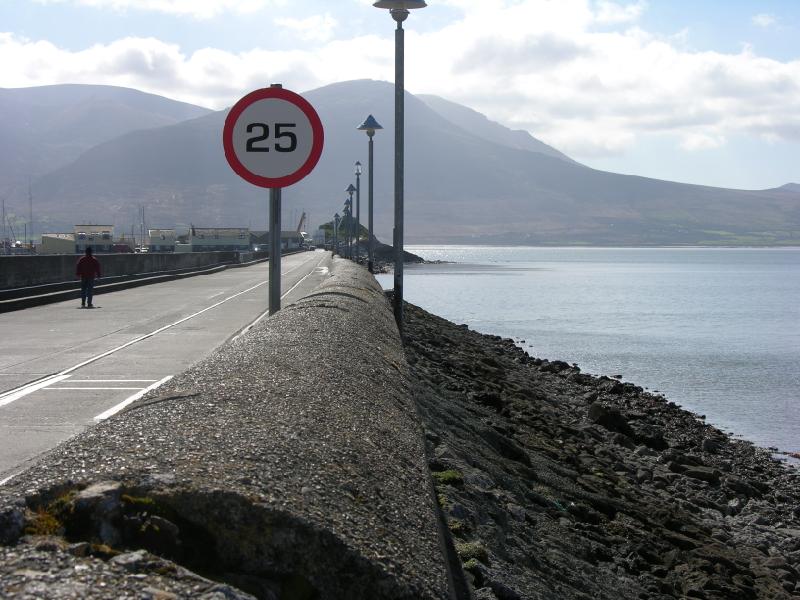 A view of the right hand side of the bridge. Early morning is better when targeting bass.

What will you expect to catch?

Mullet can be targeted inside the sheltered harbour. Bass can be found from many marks around the pier, along with coalfish, pollack, mackerel, garfish, flatfish, rays (including stingray), gurnards, whiting, conger and the ever- present dogfish. Over past years, Fenit Pier has thrown up spectacular catches of huge Stingray, Tope, Monkfish and even Common Skate. There are not many piers around the country that can boast such a diverse range and size of species. 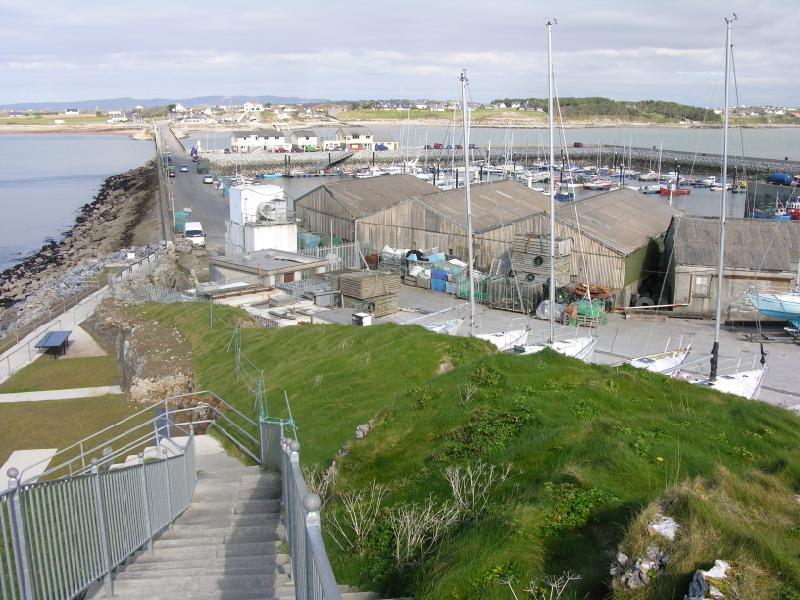 This is a view of the harbour and the bridge from the rocky vantage point.

When targeting Mullet, use basic coarse angling gear such as a light, thirteen- foot match rod and fixed spool reel. Float fishing tactics using four- six pound main-line, a size ten or twelve hook baited with fish flesh or bread flake will work well, and also allow the Mullet the opportunity to display their hard fighting abilities. Ground-baiting with crumb, mashed fish and fish oil will give a greater chance of success.
Over rough ground, especially at the outer break- water, use a pulley rig, as some areas of sea- bed here are tackle graveyards. Rotten bottom methods and lead lifts are advised. Also, try free-lining a large peeler crab for Bass, I have seen this method work so well in the past, around rough ground venues in Kerry.
Running ledger rigs over clean ground will pick up Dogfish and Rays, but obviously incorporate a wire biting trace if Tope are showing. Three hook paternosters are excellent for Flounder and Dabs. It is also worthwhile trying some float fishing for Bass, Garfish and Mackerel throughout the summer months. 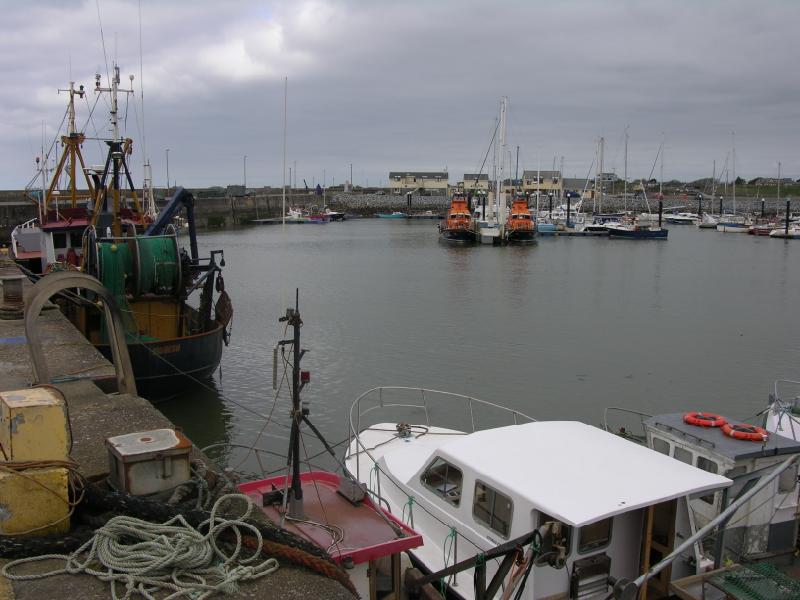 A busy commercial area but there are plenty of mullet holding areas present. A drop net is useful here.

As with most Kerry marks, have a good supply of fresh peeler crab to target bass, rays and most other fish in the area. Calamari squid can be excellent for summer rays. Fresh or blast frozen mackerel and sandeel is important, and locally dug lugworm will target dabs, flounder, gurnard, whiting and rays. Bread flake and small pieces of fish flesh to target mullet. Ragworm will take pollack but its uses may be limited as it is not natural bait for the area.

The main shop in this area is called Landers, based in Tralee. They stock most makes of tackle and have a great selection of bait to choose from. Ask for Collum who has a wealth of local angling knowledge and keeps a constant update on how, when and where areas are currently fishing.
Landers Leisure Lines
00353 (066) 7126644
landers.leisure@oceanfree.net 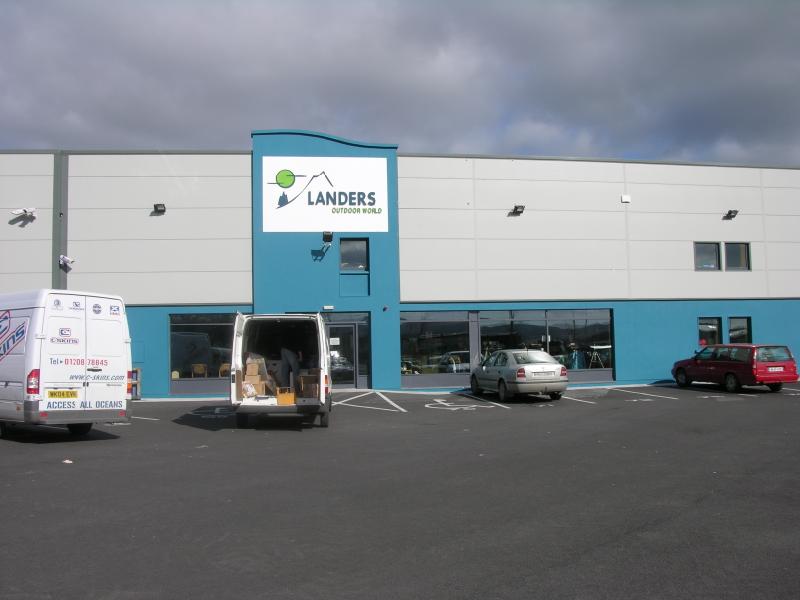 Kevin Brain is a local shore angling guide and bait supplier. His knowledge of this area is extensive, matched only by the high quality of bait he supplies. This includes blast frozen sandeel, mackerel, squid, crab and lugworm, but fresh bait can be supplied on request. He also offers excellent accommodation facilities. His services come well recommended.
00353 (066) 9474942
E-mail kevbeachbeast@eircom.net
K.B Atlantic Baits

As I stepped out of my transit van and onto Fenit Pier for the first time, I felt like I was standing on hallowed ground. For many years I have read of other anglers exploits on this venue but until now I have never had the opportunity to fish here myself.
Unfortunately this trip was during the month of March, the worst month of the year to fish any Irish shore mark, but to be honest, I didn’t really care. It was a chance to survey one of Irelands most famous angling landmarks, and catch or not, I will be back for another go during peak season, when the sea has had a chance to warm slightly, and the wide variety of species have moved in. 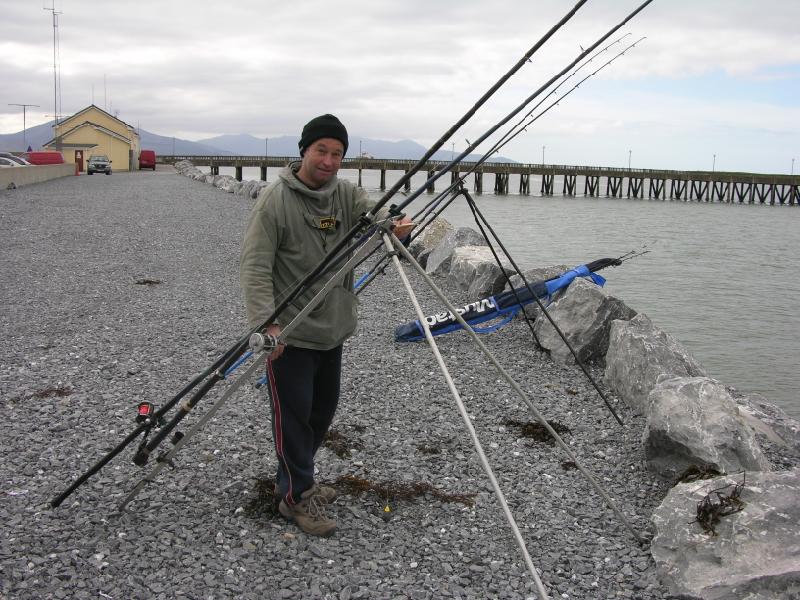 On this occasion I was fortunate to have Kevin Brain with me. Kevin is not just an excellent angler but also a superb, professional shore- angling guide. I asked him what the chances were of catching and was not surprised when he laughed and told me I would be better off in the pub! Strong and persistent easterlies all week had destroyed any hope of a good days angling.
Not surprising really when you consider that most of the species, if not all of them, that have made this area famous are predominantly spring/summer fish. Un-deterred, we took a look from the top of the rock that this pier is built on. It is a great vantage point to survey the area for potential fish holding marks, or even just to admire the view, in the company of a huge bronze statue of Saint Brendan the navigator. The statue commemorates a priest born in this area in four hundred and sixty who sailed the Atlantic and is reputed to have reached the Americas before Columbus, and he didn’t even have a g.p.s aboard. 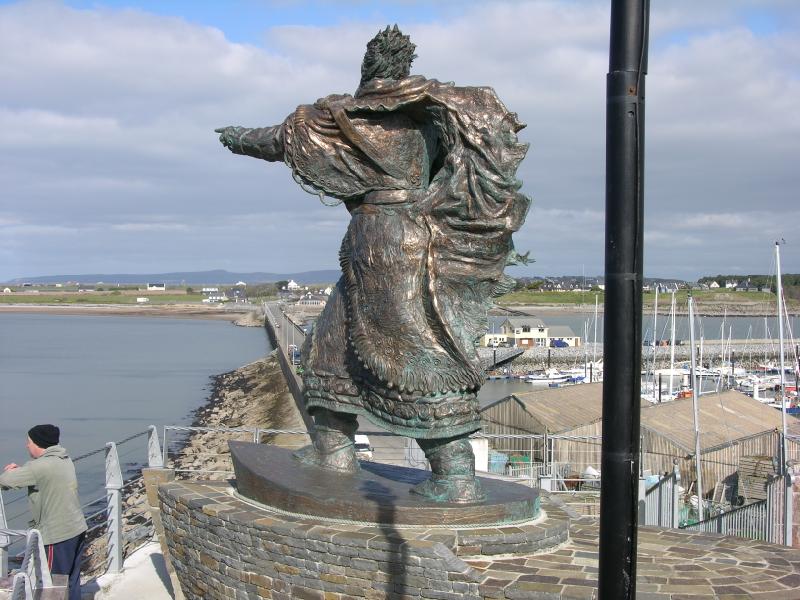 Against Kevin’s advice, I insisted on trying the outer breakwater first, with the theory that any fish about may be laying in the deeper water. After several hours without a touch, I admitted defeat and we decided to make a move to the inner breakwater. A lesson learned, you should always listen to the man with experience! The inner breakwater is where most anglers’ fish, as it is extremely comfortable, there is no distance to walk and, more importantly, gives angling access to the tide run between the harbour and the mainland.
The other popular hotspot is the viaduct itself, but as a few local lads had already set up on the bridge, we were happy to stay where we were, but keep a watchful eye on how they were getting on. 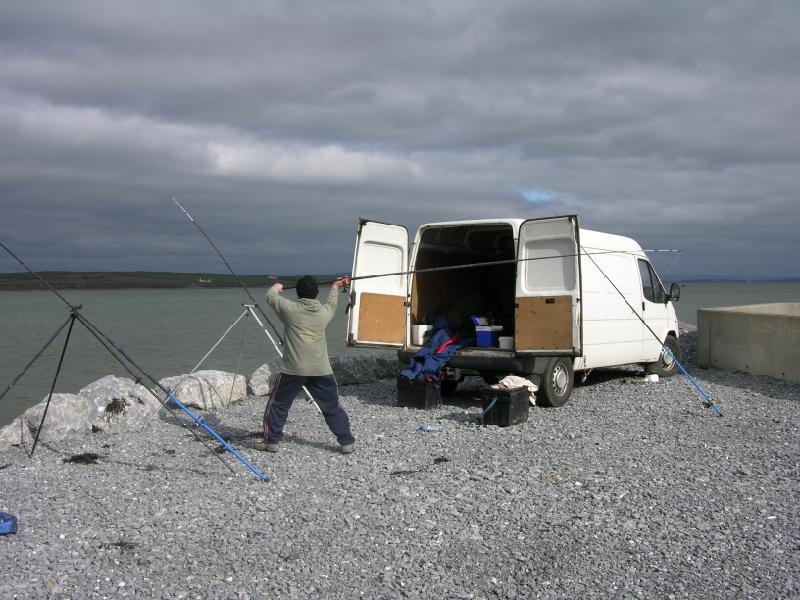 After a quick chat, it was decided that our best chance of success was to cast a couple of distance baits out in the hope of an early ray, a third rod would be dropped in close baited with peeler crab in search of bass, and a fourth rod set up with a three hook paternoster. This would roll about in search of flatties, whiting or any small bonus species. Unfortunately, these great plans and hopes came to absolutely nothing! The only species we managed to tempt were resident shore crabs that took great delight in stripping any bait we put in front of them. Revenge will be sweet when the rays move in next month. We persevered for the rest of the afternoon without a single nod on the rod tip; until Kevin tried a clipped down distance rig baited with sandeel, and saved a blank with a welcome dogfish. 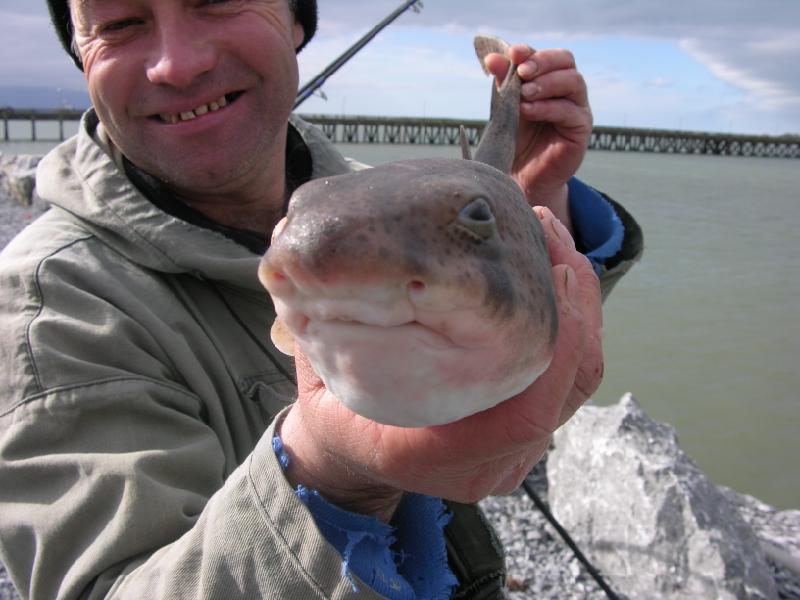 Kev saves a blank with a dogfish

The cold biting easterly got the better of us and we packed up and drove round to the viaduct to have a chat with the local lads. It turns out that no one had had a bite, so we were in good company on this occasion. Apparently the pier had been fishing reasonably well through the winter months but tapered off dramatically in March. All venues need a rest now and then and this is Fenit's time.
A later chat with Collum from Lander’s tackle shop, Tralee, has really wet my appetite for a return trip. It is amazing how much of a difference several weeks can make to a venue. His information on double figure bass, stingrays and shore caught tope have fired my imagination, so much so that Kevin’s services have been re-booked for a second attempt at the spectacular.