And the pursuit of Mullet

Regular readers may remember that during the summer I had the opportunity to test the new Shakespeare Mach 2 match rod and reel. I targeted Bream and Tench and also “bagged” up around 30lb of Rudd and skimmers in my father’s pond. The rod performed faultlessly. I finished that short product review with the promise that before the year was out I would really put the rod through its paces in pursuit of Grey Mullet, or “Irish Bonefish” as they are sometimes called. Mullet are typically a summer fish, but there are still a few about throughout the winter months if you know where to look. As the temperature drops, the odds are definitely not in favour of the angler, but then again, I rarely take the orthodox approach when it comes to targeting species!

I invited Glenn Drennan of the Pike Fly Fishing Association along to see if I could find him yet another new species that he hasn’t caught before. He can also take a decent photograph, but can’t tell him that! He certainly enjoyed his recent introduction to Tope fishing. With a little luck, maybe I could put him in contact with another fish that fights every bit as well on balanced tackle. By “balanced tackle”, I am talking about a standard 13ft Match rod and reel, main line of 4lb-6lb and size 10 hooks. This type of float rod should have a soft, forgiving tip section to cast and present delicate hook baits. It also provides a cushioning effect against the powerful “runs” and lunges that Mullet are so well known for. At 13ft, the rod length is beneficial when mending line to aid bait presentation and setting the hook at distance.

The rod must also have a fair amount of “back-bone” in the mid-section to stand a reasonable chance of fish control. A decent drag system is also recommended, as large Mullet are easily capable of ripping off 60m of line in a heartbeat if they so desire. The Mach 2 combo meets all these requirements and I was eager to put it to the test.

"Christened" with a specimen over 5lbs

With Glenn up for the challenge, and the loan of a complete match set-up from me, I took him to one of my local marks to begin the hunt. On previous adventures around Cork and Kerry I have seen Mullet practically fight over the hook-bait, and it was a relatively simple matter to pick out the larger specimens and allow them to take the baited hook. Unfortunately, it never seems to work like that in the North! I do not know why, but my local fish will immediately disappear from view after an angler’s careless movement, or when he casts a shadow across the water. A stalker’s approach is usually the key to success on my marks. This certainly makes hook-ups a great deal more challenging and really immerses an angler into that “hunter’s mental zone”. Concentration and stealth in trying to spot shoals or indeed, individual fish before they see you can be immense fun, and extremely rewarding if and when you succeed in fooling a wary fish. I explained this to Glenn before we set off, so that we were both on the same wavelength.

I have no idea why bread is so attractive to Mullet on many occasions. It has little nutritional value and almost no smell. It may be the small amount of oil emitted that attracts attention or simply that they are inquisitive and prefer to sample many possible food sources that come their way. I have watched shoals of Mullet on many occasions, feeding amongst the white foam in wind channels. Maybe the Mullet associate the colour white with feeding time. Whatever the attraction, I have caught many fish on flake and floating crust and see no reason to switch from a winning formula. So, armed with a couple of loaves each, we crept along the water’s edge in search of our target species. It is a great deal easier to spot fish from a height, but on my local hot-spots I do not have that luxury. Shallow water with a fair surface ripple makes fish-spotting almost impossible and we managed to scare a couple of wary shoals out of casting range with our initial efforts. Un-deterred, we continued the hunt and managed to see a tell-tale break in the surface ripples, indicating the presence of one or two fish on the move an inch or two below the water line. The secret is not to barge in but stay back from the water’s edge and flick a few small samples of bread slightly upstream or upwind. They will quietly drift down to the un-suspecting fish. A small maggot catapult can be excellent for this and with a little practice is extremely accurate. Once they rise to the free offerings, the battle is half won, and you must then do the same with a baited hook. I used to use a loaded waggler or “puddle chucker” float to carry the flake or floating crust, but casting any distance can be somewhat limited if there is an on-shore breeze. I have since found that using a carp-controller float makes life a little easier. These come in numerous sizes and weight capacities, and are designed for use when targeting surface feeding Carp using floating pellets, dog biscuits or floating crust etc. They fit the bill perfectly for Mullet fishing, and cast so well that you can easily over-cast then slowly retrieve the bait into the feeding zone without risk of “spooking” the fish. We soon had this shoal accepting the free offerings and Glenn was so keen to hook into a fish he was fit to burst! I could hear him cursing under his breath each time a Mullet passed within inches of his float, taking the free samples and frustratingly ignoring the hook bait. Whilst watching Glenn’s float in all the excitement, I had taken my eye off my own, and was rudely awakened when the tip of the Mach 2 bent round, line ripping off the pre-set clutch! Although I had missed the excitement of the float going under, I certainly wasn’t complaining as the Mullet did all in its power to shake the hook. The yellow tipped float controller can be seen amongst the foam

Out of interest, we timed the battle, and after a full 14 minutes, a tired out angler stood and admired a tired out specimen Mullet safely in the landing net. These really are dogged fighters and the Mach 2 proved it was up to the job in successfully playing a specimen without line snapping or a hook pull. Unfortunately, all this commotion had scattered the shoal and put paid to any hopes of seeing another Mullet for a while. We could sit and wait for their return, but it is much quicker to go on the hunt again, and this time I would take a back seat in the hope that Glenn would get his opportunity. 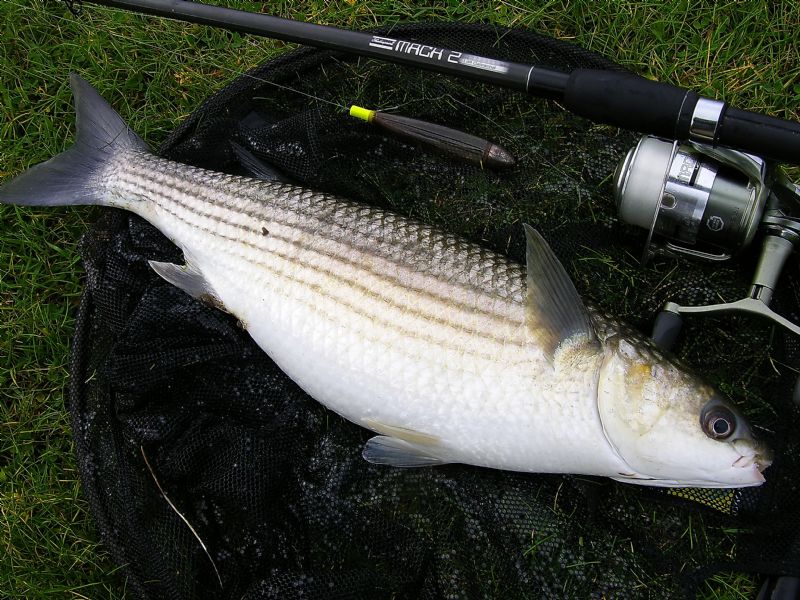 Another specimen falls to teh Mach2

Further along the shoreline, we spied a second pod of fish, luckily before they could spot us. In fairness to Glenn, he insisted that I fish too, and I didn’t argue. Mullet are way too much fun to just stand back and watch! On this occasion we ended up with a double hook-up which was fantastic but absolutely useless for taking a photograph. Glenn was stunned at the fighting abilities and needless to say, well and truly hooked on this new species. Again, the double commotion spooked the wary shoals and it was time for another move. By this stage, it was one to Glenn and two to me, not bad going by Northern Irish standards. There was one final area to try before we were forced to retire, but this involved nipping back to the jeep for a quick cuppa then a short drive further along the coast. This last mark was exposed to the wind and a little un-comfortable, but we could see fish feeding in the wind lanes which was simply too tempting to pass up. Again, the controller float allowed for a distance cast into the wind, leaving room to retrieve the hook bait back into the feeding zone. A small circle appeared around the floating bread flake, a tell-tale sign of interest, which then slipped below the surface, immediately followed by the float. It is never necessary to strike hard, and certainly not recommended due to the instant power and turn of speed a Mullet is capable of, and the light lines involved. This is where the forgiving tip section comes in to play. A simple but fast lift into the fish usually suffices, but always make sure the drag is pre-set. After a lengthy battle, a second specimen slid over the lip of the net, having fought every bit as valiantly as the first fish. As the winter sun nestled into the horizon, our time had almost drawn to a close on this adventure, but one last cast! There is always time for one last cast. This resulted in fish number five, which eventually gave up and I was able to lift it from the shallows as the sun disappeared completely. Mullet probably feed into darkness, but with five fish landed, four hooked but lost and just as many missed takes, it was definitely a Mullet day for Glenn to remember. He had a fabulous insight into what it takes to target and land these elusive, much misunderstood species, and I had the perfect opportunity to put the Mach 2 Match rod and reel through their paces, which performed perfectly well.