Where did that year go? It wasn’t too long ago that I sat scratching my head and wondering how to plan the last specimen hunting series. Now we are ready to begin again and face a whole new year of angling prospects and challenges. After chatting to the editor, Dave seemed happy with the response and feedback from the specimen challenge and suggested I should continue the format, regarding species, tackle set up and tactics, but without the pressure to target actual specimens. 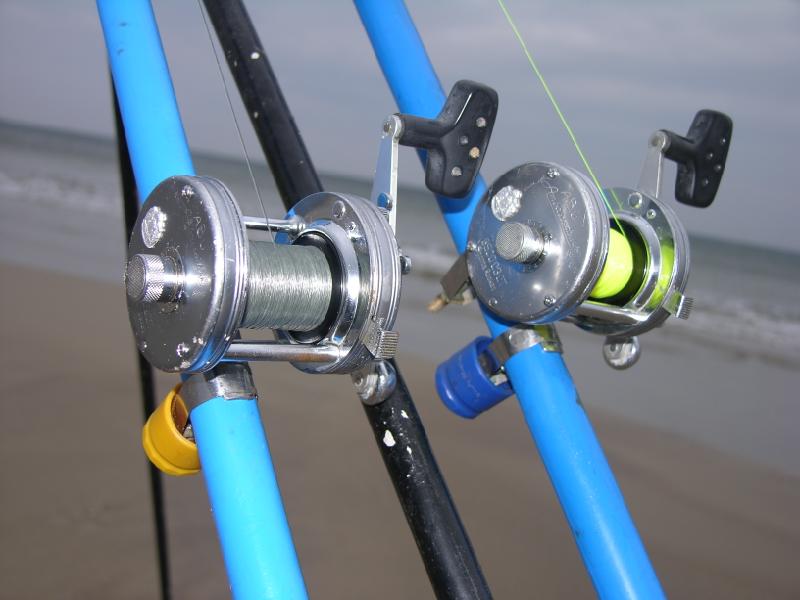 Don’t get me wrong, I thoroughly enjoyed last year’s specimen hunt, and ten out of twelve positive results were more than I could have wished for. But hopefully I can now relax, and just look for different species without the pressure of targeting that fish of a lifetime! So where do we go from here? I had the same problem last January in as much as most species have dropped out of sight or moved to warmer climes coinciding with the sharp fall in water temperature. However, one fish that battles on regardless around our shores at this time of year is the humble Flounder, and rather than make life difficult, I decided this was the first species to target. And it would be fool-hardy to go Flounder fishing without quality peeler crab, fresh or frozen

A call to big Phil suggesting the idea didn’t require asking twice. Unlike me, this is his kind of fishing. Wrapped up in winter woollies and waterproofs, Phil is in his element, sipping tea and waiting for a nod on the rod tip. Bait was organised in the form of a couple of pounds of ragworm, bought locally, as my back isn’t up to the hard digging required these days. I did manage to dig a few lugworms as back up, and frozen Mackerel fillets, Sand eels and Calamari Squid were brought along as tip baits. On arrival, we decided to head away from the well-beaten angling marks and chance a relatively un-touched area. The wind-swept sand here can be treacherous, and this is the main reason I traded in the Transit van for the Discovery! Four-wheel drive is definitely an advantage on this kind of venue. With the nose pointed into the wind, there was enough shelter to sit on the tailgate, watching the rod tips and sipping hot cups of tea, happily talking all the usual nonsense that anglers talk the world over, while waiting for a bite. 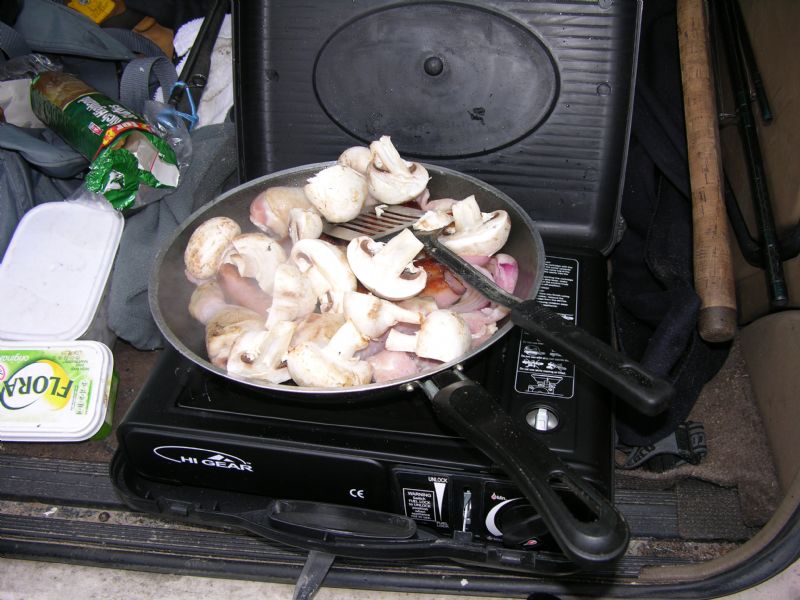 No better way to pass the time on a cold winter morning while waiting for a Flounder bite!

Action was slow as the tide turned and began to ebb, and it wasn’t until the sun began to nestle into the horizon that my rod gave the typical “machine gun” rattle signifying interest in my hook baits. A firm pull, followed by a slack line was the positive signal I was waiting for and I wound down and lifted into an obvious “flattie” bouncing on the business end. I know that you will never get a fight out of a Flounder, more like a series of nods on the rod tip and a slight tightening of the reel on retrieve. But there is still that feeling of achievement when the fish appears through the surf tables, especially when it’s the size of a dinner plate, arching and slapping in the shallow surf tables to escape. The reward, a fighting fit Flounder from the surf

As the sun set, and darkness crept over us, the flounder Fed well, with very few undersized fish showing. Even a couple of welcome Turbot made an appearance, typically taking Mackerel strip rather than worm baits. All the fish came on the light rod fished over the first breaker, using a three-hook paternoster, floating luminous beads and a three-ounce rolling lead. The heavier rod put out at around eighty yards for Bass or Turbot did not twitch all night, despite regular bait refreshing. By the end of the evening, and low water, it was time to give it best as they say. With a one hundred mile drive ahead of me, and work the next day, this was never going to be a typical “Terry session”. However, we came to the right mark and caught what we were after, and I must admit, it was a thoroughly enjoyable afternoons angling, targeting one of our most obliging flat fish species.
Last cast of the evening found a small Turbot of around one and a half pounds, not bad from the shore. Its tail was badly torn and I can only imagine what the poor thing must have endured from a seal or other predator. However it seemed healthy enough and I returned it to hopefully recover and fight another day. This juvenile Turbot has been through the wars! Hopefully it survived its unusual injury

At Benone, the top bait has to be ragworm in its various forms. Tipped with a slither of Mackerel belly strip, this combination has accounted for the vast majority of captures over the seasons. Lugworm or bunches of maddies are excellent and white ragworm can pick out a fish when bites are slow. All venues are different, but generally storm beaches are worm/fish bait combinations and estuaries and harbours are worm/crab cocktails. Sandeels, Mackerel strip, Sardine and Herring have all worked for me in the past, so it pays to carry a fair selection when targeting a new venue for the first time. For the adventurous angler, Flounder can be taken on the fly early in the year. I remember watching an angler spinning with a twelve gram Toby at Cahore Harbour and lip hooked a nice Flounder, so they will definitely take a lure if you want that challenge. Basic Carp tackle or a light Bass rod is more than enough to target Flounder, especially in sheltered harbours and estuaries. A spinning reel loaded with twelve-pound line would land any Flounder encountered and also deal with any bonus Bass that may turn up. Storm beaches require a step up in tackle to basic beach casting gear, mainly to combat heavy surf and strong tidal currents. A twelve or thirteen foot rod is the norm, teamed with a fixed spool or multiplier and loaded with fifteen pounds b/s mono. It is important to incorporate twenty feet or so of sixty pounds b/s shock leader as a safety margin when casting heavy leads, ranging from 1oz to 6oz, plain and wire grip versions.

End tackle should be simple, avoiding un-necessary tangles. A three-hook paternoster is the normal set up. Tie several traces using varying lengths of snood, and perhaps wire stand-off booms in a heavy tide or longer snoods to create added movement on slacker tides. Fine wire hooks from size 2 to size 1/0 will cover most situations when Flounder fishing.
At times it can be an advantage to use a two-hook paternoster, but incorporate a “flyer”. This is simply an extra snood and baited hook clipped above the trace with a link swivel between two beads. During the cast, the flyer will slide up the shock leader, stopping at the leader knot. The idea is that it will cover a larger area, and also have extra movement. It works very well. Also, if most fish come to the flyer, it is obvious that you are over-casting with the other two baits, and should drop them closer on subsequent casts to find the bulk of the fish. The flyer can also be used to target bonus Bass or Mullet hugging the shore. Big Phil with a juvenile Turbot

Probably the best tactic of all, especially on a new venue, is to look at the seabed during low water. Keep a look out for channels and gullies where Flounder will feed or find safety and shelter. As the tide floods, they will move along these marks hunting as they go. They move in small pods, so once located, re-cast to the same area to pick up others. Try different baits on each of the three hooks allowed. This will act as a short cut to finding what is most successful on the day.

Also, as with all disciplines of angling, do not be afraid to try different methods. I once fished Waterfoot Beach, in the surf, and was ridiculed by my mates for using a running ledger rig, and a pike float. The idea was to use the float to drag a baited spoon through the swim, similar to drifting on a boat. It worked and I managed to catch when no one else did.
Braid can be very effective, transmitting every movement and rattle down the rod and is exceptional for bite detection. The draw back is that it also transmits every knock and movement from the surf and wave action, which can be frustrating at times. It will also, on occasion, pull grip leads out of the sand, whereas the stretch properties of nylon allow the grips to stay put.
Finally, try a small, plain lead if circumstances allow. This will allow your rig to move through the swim in the tidal current, at a determined speed, hunting out hotspots and fish holding gullies. If needs be, use a grip lead to control the speed, cutting the wires back with pliers, a little at a time until optimum speed is achieved. Watch leads, star leads and similar can all be used to great effect.

With a colouration of mottled brown and green on the back, and dotted with small orange spots, Flounder blend in superbly with the seabed. Over light coloured sand, they will tone down to the same colour as their background. The under belly is pure white, although I have caught fish that are entirely white. They have a line of rough scales easily seen along the lateral line.
Commonly found in estuaries, muddy harbours and storm beaches throughout the UK and Ireland, these small flatfish have an amazing ability to venture into brackish water, and even well into fresh water. I once caught a Flounder above St.Mullins, County Carlow in the River Barrow, whilst targeting Eels. This was approximately fourteen miles from the sea!
Once maturity has been reached at three to four years old (20-35 centimetres), breeding takes place in spring, between February and May depending on water temperature, where they move into water depths of 20-40 metres, apparently laying up to two million eggs! The hatchlings are pelagic and seek shallow bays. Here they head for the seabed to undergo metamorphosis. This involves a dramatic change in body shape, along with one of its eyes migrating to the upward facing side. From now on, the Flounder will continue life on the seabed, hunting, ambushing and hiding from larger predators. They feed mainly on marine worms, molluscs, crustaceans and small fish; this is reflected in the bait they are commonly caught on.
It is worth mentioning that a survey carried out in 2003 estimated world stocks of Flounder were only 10% of the stocks before pre-industrial levels. A worrying piece of data!