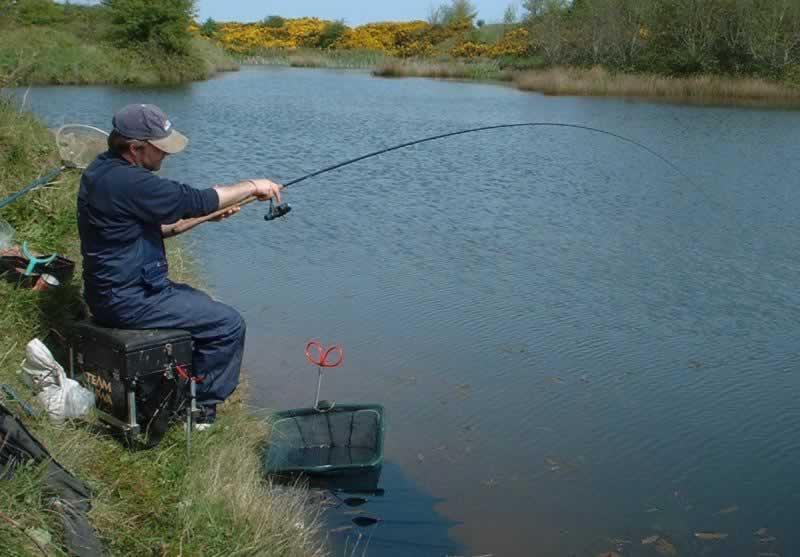 The docile appearance of a Tench, with its stunning olive-green and gold body, small red, "teddy-bear" eyes and down-turned mouth, completely belies the awesome power it is capable of producing once hooked on rod and line and balanced tackle. This is in no small way due to the large paddle-like tail, barrel of a body and sheer dogged determination it possesses that will keep an angler on his toes throughout the battle. It is always a relief to see a sizeable fish slip into the landing net after an arm aching fight.

It is these qualities that attract me in my hunt for Tench every season, just as soon as the air and water temperature begin to warm sufficiently. Although Tench will sometimes feed after a few days of fair weather during cold spells, consistent temperatures of twelve to fourteen degrees are always preferred. 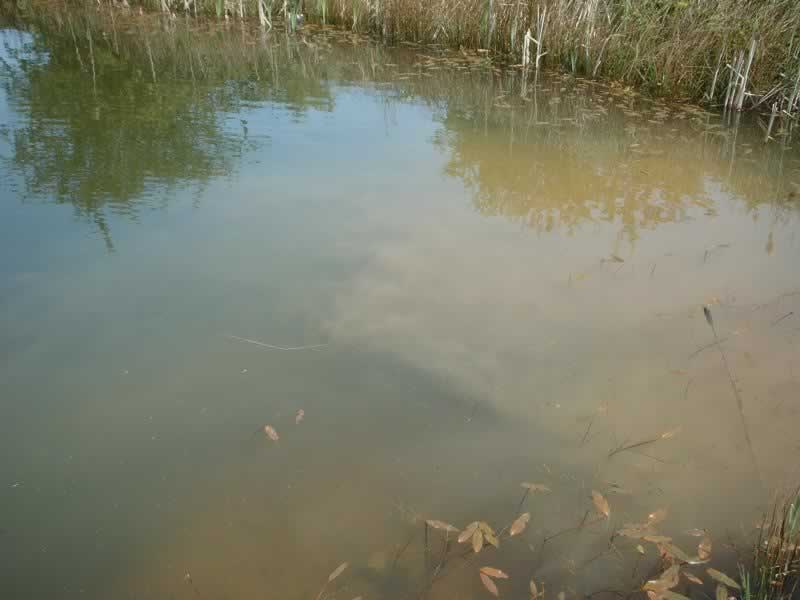 The disturbed lake-bed shows that Tench were feeding heavily here

Personally, I have always believed that to achieve a result when angling it is important to almost think as a fish, and better still, as each particular species sought. With this in mind, the background and lifestyle of Tench must be considered. There is always an exception to the rule in angling, but certain generalisations can be made. Tench may feed through-out the day but usually prefer dawn and dusk sessions, and sometimes right through the hours of darkness. They are primarily a bottom feeder but will, on occasion, feed mid-water and even take food morsels from the surface. With this in mind, a picture is beginning to form. Early morning or evening would be preferable, with tackle suited to bottom fishing. I prefer float fishing if conditions will allow, considering factors such as wind strength and direction and also water depth, but ledgering is equally effective. In fact many ledgering techniques for Tench have been adapted from Carp angling tactics, such as bolt-rigs, hair-rigs and the method feeder.
Bait must also be considered, and Tench are known to have a broad taste when it comes to feeding. Maggots and casters are almost certainly the top bait, catching more Tench, though not necessarily the bigger fish, every year, although this may be due to the fact that this is a popular bait used throughout the country. Bread flake, crust and worms are old favourites, and sweet corn is responsible for many fine catches. The problem with these baits is that many other fish that inhabit the same waters will also readily take them. This, as you will imagine, can be extremely frustrating when targeting one particular species.  This has led many Tench anglers to experiment with larger Carp baits such as flavoured boilies and pellets, which is hardly surprising as large Tench are often taken by Carp anglers on these high protein baits. Cubes of luncheon meat may be effective at times, as will cockles and pieces of freshwater swan mussel. 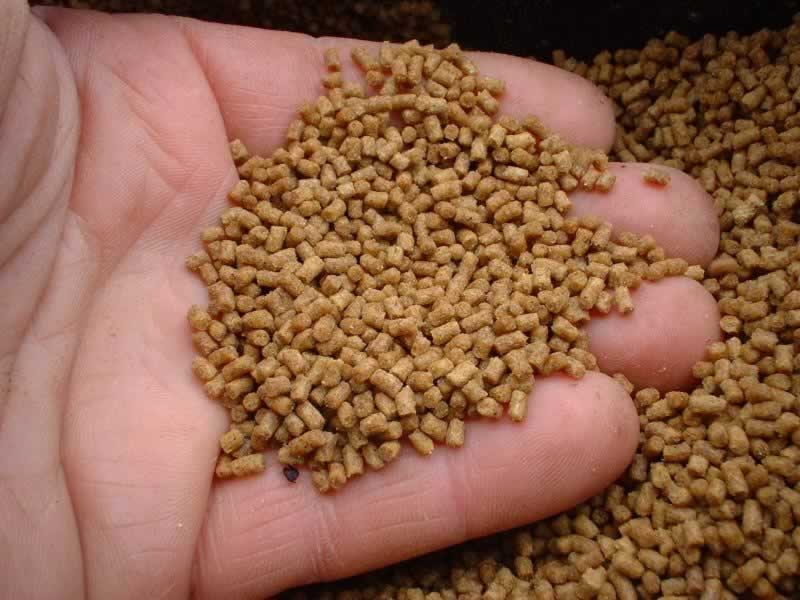 When Tench are feeding in earnest, they are capable of mopping up vast amounts of food, and tend to respond very well to pre-baiting tactics. With this in mind, I recently decided to try a local Tench water, and began with the bait preparation. Introducing large amounts of breadcrumb and particles can be an expensive operation, but there are cheaper alternatives to consider. The finesse of fine crumb is usually important when match angling but not entirely necessary when specimen hunting. Try a local farm feed supplier for inspiration. Sow meal, layers crumb, layers mash and several types of pony mix are excellent to bulk out a pre-baiting session at a fraction of the cost. Most of these outlets will also sell large quantities of seed such as hempseed, extremely useful for added particles.
To give myself the greatest chance of success, I decided to pre-bait the lake in two areas over a four- night period, before actually wetting a line. Each evening I mixed a concoction of one part breadcrumb, three parts layers crumble, one part pony feed, plus a full tin of sweet corn, one pint of boiled hempseed and one pint of casters. Whether this was too much or not enough is difficult to say, as every angling trip is an education, but it equated to approximately thirty, extremely large balls of particle-packed feed introduced per night. 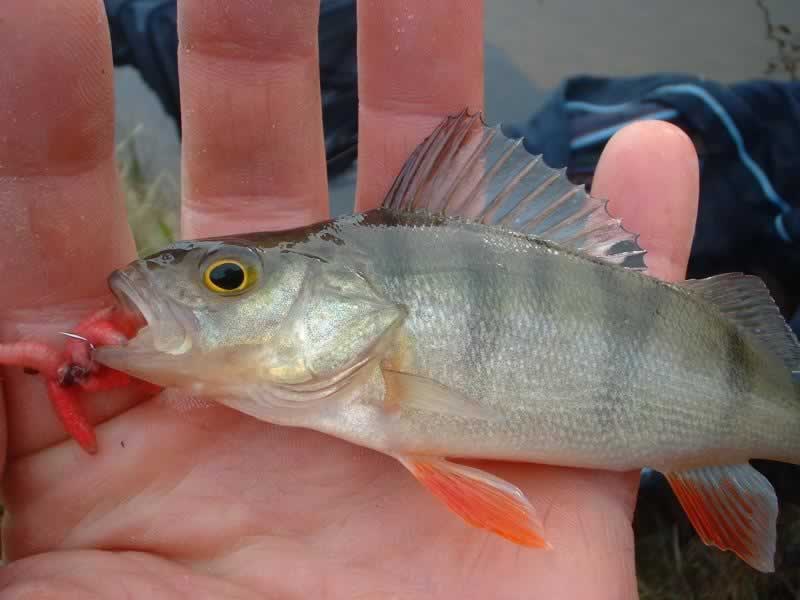 A delightful little Perch, but a "nuisance" on this occasion!

Before introducing all this feed, a little ground-work had to be carried out. It is wise to choose an isolated swim on a known water, as there is nothing worse than pre-baiting for several nights to find an angler fishing in your chosen spot reaping the benefits of your hard work. Once I had found a suitable “tenchy” looking area, I spent the best part of an hour plumbing the depth and seeking out any fish holding features. Finally, contented with what I had in front of me, the feed could be introduced. I put in all thirty orange-sized balls in and around the float as a marker, lined up with a tree on the far bank for accuracy, plus some loose fed corn, boiled hempseed and trout pellets closer in at the margins as a back up swim. This procedure was repeated for three consecutive nights before I felt the time was right to attempt an early morning session.
On arrival at the lakeside, I noticed a worrying frost on the grass and a gentle mist rising from the water surface, and hoped that the water temperature had not dropped too much. It is surprising how different a lake can appear at this early hour, but proceeded in setting up the float rod and getting settled in. As I needed to cast a reasonable distance with ease, most of the split shot was bulked around the float, with two BB’s thirty inches from the hook, and a further three number fives as droppers.  The droppers were set to drag gently on the lake bed in order to slow the float down and combat surface drift. With so much natural weed present, I figured it wise to keep the hook length at three pounds breaking strain, with my favourite hook pattern, a Kamasan B611 spade-end whipped on. This is a strong hook that has never let me down in the past, and a size twelve is perfect to take a sweet corn, maggot and caster cocktail. 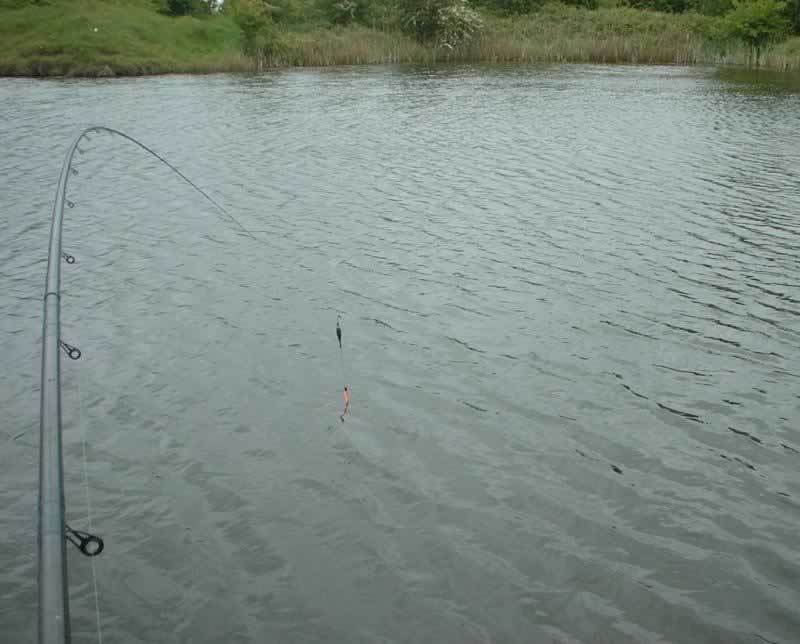 The float shot under within seconds of settling and I soon realised that I had a sizeable shoal of small Rudd and Perch in the swim; happily feeding on the particles I had put in on previous nights. I stepped up the hook and bait size but still continued to have my Tench bait obliterated by these juvenile "nuisance" fish. I made a mental note that next time, I will have to try larger baits such as luncheon meat, boilies or pellets. My only choice now was to feed the smaller fish off, so a regular sprinkling of maggots catapulted over the float would hopefully either satisfy the Rudd and Perch, or keep them occupied long enough for the larger fish to pick up the hook bait. It wasn’t long before I struck into a gentle dip of the float only to find a solid wall of resistance followed by a powerful pull of line against the pre-set drag. This dogged fight was typical of a sizeable Tench, but I could not recall past battles being quite so vigorous or difficult to control. Obviously this was a decent fish that required some careful manoeuvring,  which finally succumbed to the landing net after a good five-minute fight. A superb “lump” that was immediately weighed and pushed the scales round to two kilos, eight hundred and twenty five grammes, that’s six pounds plus to you and me and an absolute cracker to start a session with. It always amazes me, but I am pleased to say, that after thirty years angling experience, the flush of adrenaline that still kicks in when a fine fish reaches the landing net. 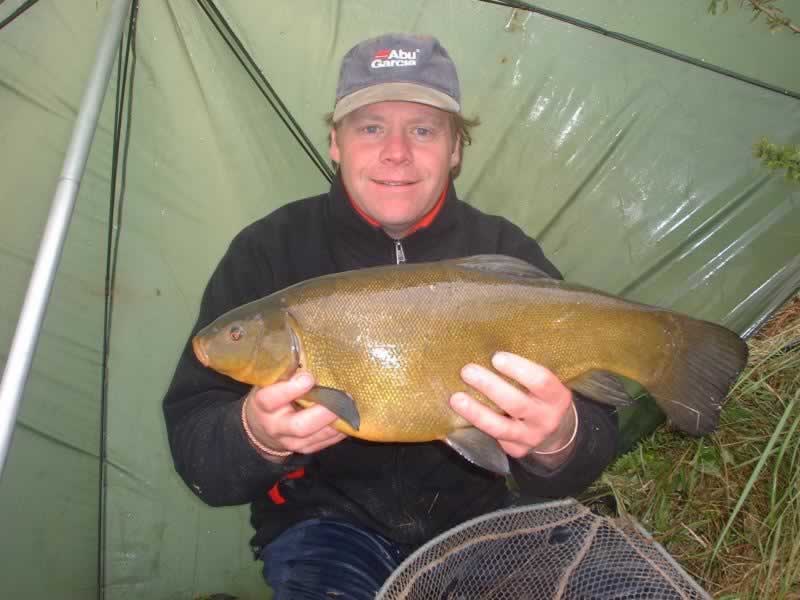 A fantastic start to the session with this plump "six-pounder"

The juvenile fish re-appeared, and after fifteen or so small fish and destroyed hook-baits, I was taken by surprise with another hard-fighting specimen. This one looked identical, but weighed-in slightly lighter at two kilos, eight hundred grammes, but still left me grinning like the Cheshire Cat. Two specimen Tench was hard to comprehend, especially in our relatively cold climate of Northern Ireland. The disturbance this last Tench had caused was un-avoidable and had stopped any further bites; even the small Rudd and Perch had drifted away. I realised it was time to pack up, as on many occasions on other Tench waters, the feeding usually grinds to a halt as the day progresses and the sun rises high in the sky.
As usual, the rod is always last to be dismantled, and with a quick glance at the float I saw it dip and slowly sink below the surface. I lifted into a third Tench that fought every bit as hard as the previous two, and could not believe my luck as another six pounder slipped safely into the landing net. One sought-after specimen was fabulous enough, but looking into the keep net at three fine, hard-battling Tench made all the time, effort and pre-baiting more than worthwhile. If nothing else, I hope this article shows that with a little homework and a small amount of work, Tench are a species that will reward the persistent angler time and time again. By trying out new waters, or even well known waters using new tactics or a fresh approach, you may well be surprised with the results. 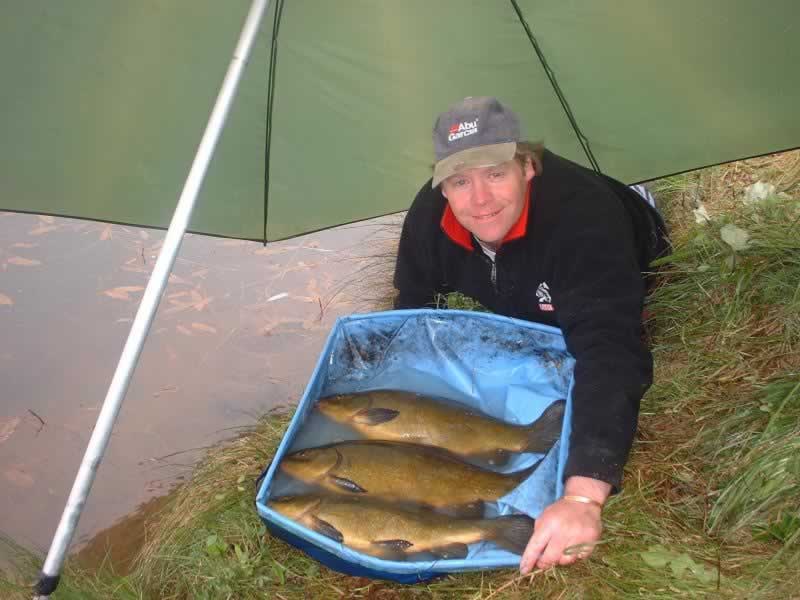 A triple-shot of six pound Tench 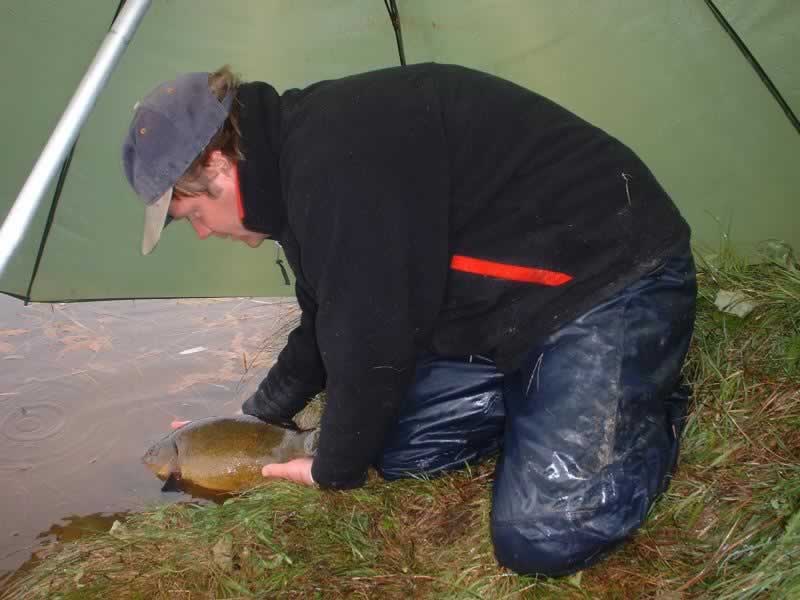