Brown Trout (Salmo trutta and others!) by Mark Corps
Ireland’s ancestral trout originated in an area around the Black, Caspian and Aral River catchments. Ferox, the oldest trout race to colonise Ireland, made it to Ireland as far back as 50,000 years. It is believed that the rest of the Irish trout stocks made it in 3 waves between 10 – 18,000 years ago toward the end of the last glacial period.

Identification - usually their coloration is light brown or tawny with pronounced black spots on the back, sides and head. The spots are often surrounded with a reddish halo, along with reddish spots on the sides. However there can be significant variations in both morphology and colouration. These used to be simply attributed to differences in feeding, habitat and the requirements of camouflage but it is now understood to be genetic.
Professor Andrew Ferguson (Queens University) working on trout genetics believes that their classification has been chaotic. It is probably helpful to think in terms of a ‘species complex’. Kottelat proposed that there are in fact 25 species of trout in Europe and O’Grady suggests maybe even more.
Since the advancements of DNA sequencing techniques, it is now possible to measure the relatedness of different types of trout. Ferguson found that trout are very varied. He states that Irish brown trout posses’ 5 x the genetic diversity found in the in the world’s human population.
This myriad of types has led anglers to recognise the different varieties of trout. These include Ferox, Gillaroo, Sonaghan, Croneen, Bog, Bull, Slob, and White (Sea) trout to name but a few. Some of these names are local whilst others reflect features possessed by the particular stock. 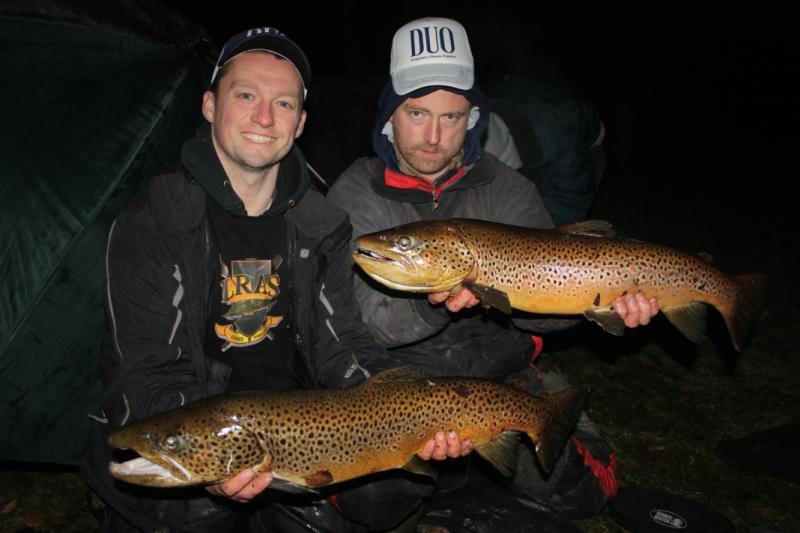 A pair of double-figure trout prior to release

Ferox (Salmo ferox) as a subspecies can reach large sizes (20 lbs plus) and great age (23 years has been recorded). They are piscivorous, specialist feeders on arctic charr, trout and salmon parr.
The Irish Ferox found in waters such as Lough Melvin, Erne and Corrib are genetically similar to those in Lough Awe, Rannoch and Tay in Scotland.

Sonaghan (Salmo nigripinnis) are said to be unique to Lough Melvin. They have a light brown or silvery hue with large, distinctive black spots. Fins are dark brown or black with elongated pectorals. They are a relatively small, shoaling fish, individuals of 1½ lbs are considered large. Sonaghan are usually found in areas of open, deep water, where they feed on mid-water planktonic organisms such as water fleas ‘Clandocera’, midge pupae and phantom midge larvae. They give a powerful and energetic fight when hooked, out of all proportion to their size.

Gillaroo (Salmo stomachius). It takes its name from the Gaelic ‘Giolla Rua,’ meaning ‘red fellow’. This is descriptive of the fish’s colouring; it has a bright, buttery golden colour on its flanks, with bight crimson and vermillion spots.
Folklore surrounds the ‘gillaroo’ and how they found their way to Melvin. It tells of how an old monk fasted for a period on Melvin's shores whilst seeking solace. Completing his period of abstinence he searched for food, only finding some mushrooms on the slopes of Rusheen.
Having spent days watching both salmon and trout in the lough he decided to try to catch some. At the end of an evening's fishing all he had for his efforts were an eel (he thought hardly worth roasting) and a duck egg he had found in a nest.
The desperate, starving monk made a cross in the sand in which he placed his catch. He prayed for a reward for his fast. Opening his eyes, the eel and egg had turned into two beautiful golden bellied trout. He thought the fish so splendid he could not eat them so released them into the lough!
Gillaroo feed almost exclusively on bottom living invertebrates, sedge fly larva and shrimp. The stomach wall is developed to crush snail shells. Gillaroo are also found in other loughs including, Neagh, Derg, Mask and Conn. 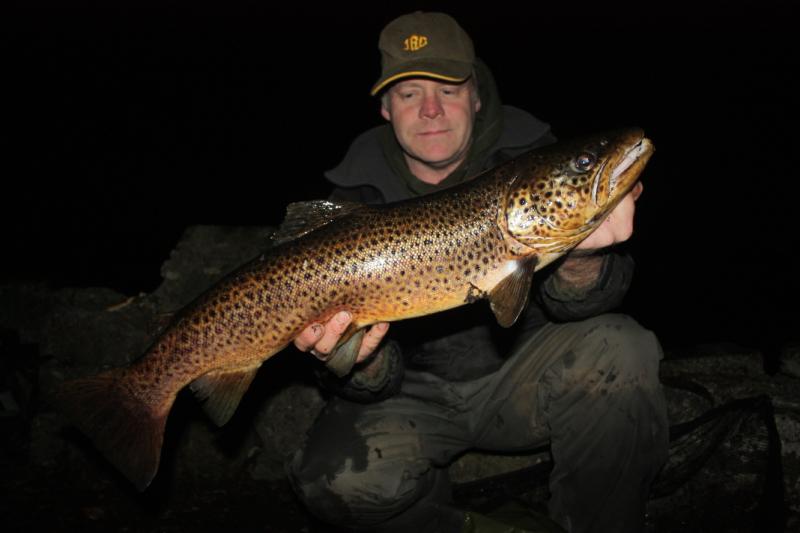 Dollaghan - its name is derived from the Gaelic ‘dulach’ meaning swift running. Dollaghan are thought to have evolved from land locked sea trout. They can reach enormous size; fish in the teens of lbs are caught every season. They are mainly caught in the dark using similar methods and techniques to those used for fishing for sea trout. Dollaghan are native to Lough Neagh and its tributaries such as the Kells Water, Six Mile Water, Moyola and river Main. They are potamodromous (migrating in fresh water only) so spend much of the year in the lough, running rivers in the autumn to spawn.

It is believed the name comes from the Irish, ‘Cronin,’ meaning little brown or yellow one. Like Dollaghan they are also potamodromous spawning in rivers such as the Little Brosna and Camcor then migrating to Lough Derg to feed.

Sea trout are multi spawners and can live up to 15 years old, during which time they may return to spawn almost every year. The current Irish record sea trout stands at 16 lbs. 6 oz taken by Thomas Mc Manus in 1983 from the River Shimna in Co. Down.

Sea trout or ‘white trout’ are anadromous. They breed and spend their early life in freshwater, before migrating to the sea. They return as adults to freshwater to breed. It is mainly female fish that go to sea, the better feeding giving them a reproductive advantage as the larger the hen the more eggs she will produce. 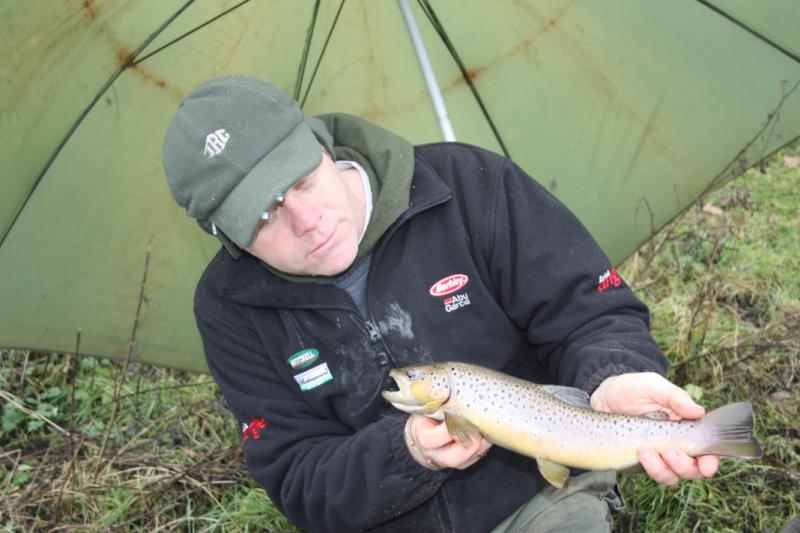 Slob trout spend part of their lives in estuaries. Though living in saline water they do not smoltify like sea trout and generally little else is known about them. Some have suggested that they are simply brown trout that roam their home river looking for optimum feeding. Others believe they can again be isolated as a different species, trout that have adapted for estuarine living.

Where to catch - brown trout are the most widely distributed freshwater fish in Ireland. They can live in most waters from small mountain streams to broad limestone rivers and loughs. Its main requirements are clean water and suitable gravel in which to spawn.

When to catch - most brown trout fisheries open between February 15th and March 1st ; closing on 30th September with some exceptions that close on various dates between the 15th of September and 12th October.

Methods – trout are catholic feeders and as such can be caught by varying methods, bait, spinning and all methods of fly-fishing (including dapping). When and what works best depends on the time of the season, day, the prevailing weather and water conditions as well as the ability of the angler. 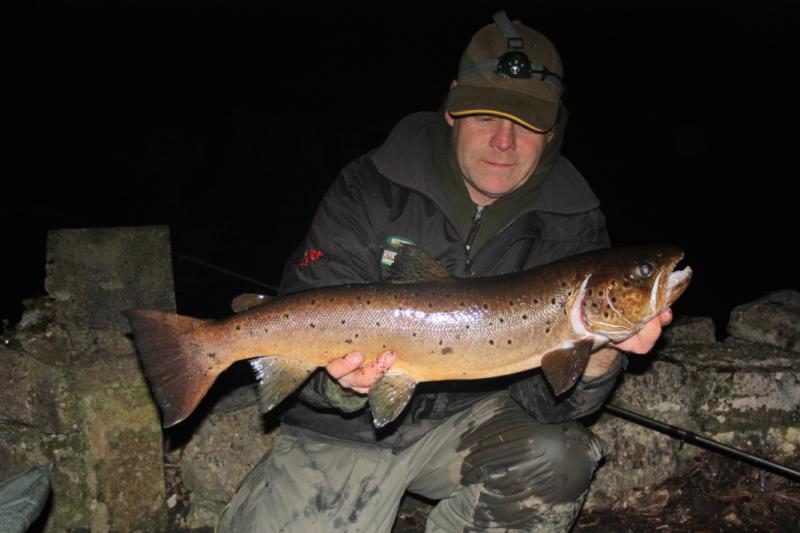 Fly-fishing is undoubtedly the most popular method of catching brown trout in Ireland. On the loughs most fishing is done from a drifting boat with wet fly. It is usual to use a team of 3 or 4 flies, fishing a short line ‘dibbling’ the bob fly on the surface. If a hatch is taking place anglers will quickly switch to dry fly.  Dapping, either using artificial fly or the real thing is still practised on some loughs and can be highly effective at times. Many believe this is a way of getting the larger fish to the surface.  On rivers the approach tends to be more imitative using dry fly or nymph.

Spinning can at times be very effective. On the loughs every season very large trout are regularly taken on the troll. In the rivers lures like small mepps, rappala and natural minnow can be very effective particularly when spun up stream. 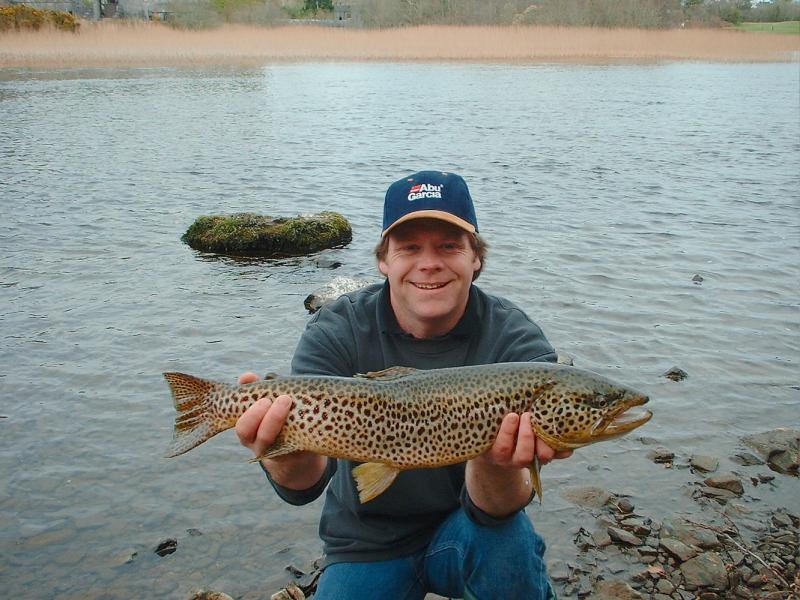 Bait fishing in all its forms will produce trout as many coarse anglers can testify. As opportunistic feeders trout will take a wide range of baits, worm being the first bait most think of. However, they can be caught on everything from maggot and hemp to plastic sweet corn.