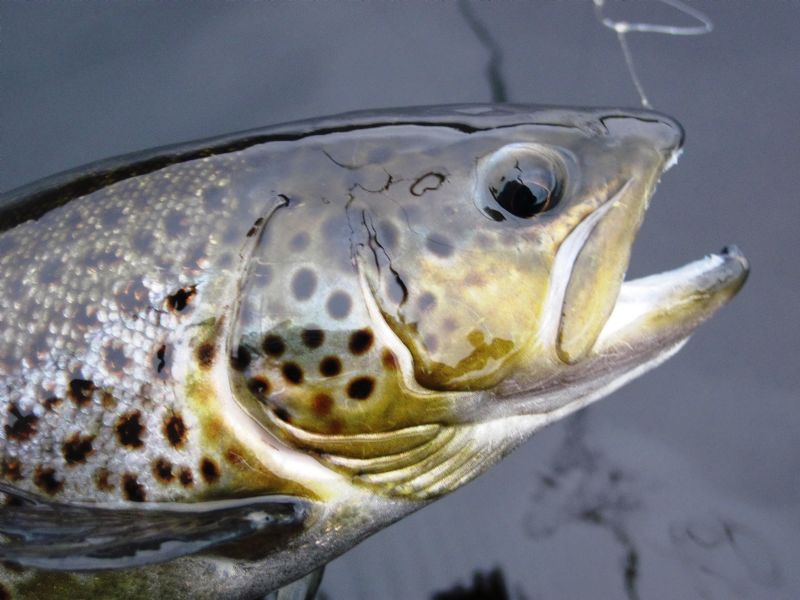 Of all the Game fish, Brown Trout have the greatest variety of names; Sometimes these refer to Races of Trout, and sometimes a different name is given even to the same fish in different parts of Ireland and Britain, but all native European Trout, including Sea-going  Races are members of the specie:

Perhaps the best way to consider them is to group them by habitat and feeding habits, which will give us three overall headings, thus: (1) River, Riverine or Stream Trout, which live all their lives in moving, fresh water. (2) Lake (Still water) Trout, who spend most of their lives in lakes, but still run up the rivers which feed their lakes to breed, and (3) Sea Trout, which live in salt, or brackish water, but also need to run up streams or rivers, in order to breed. Within each of these headings is a plethora of names for and races of fish, which can be very confusing, so let us examine this situation under each sub-heading:

The Trout who lives out his entire life-span in a river is most commonly called, the "Brownie", or Brown Trout. Perhaps his only pseudonym, in Irish terms at least, is the Gaelic word, "An Bric" (pronounced "Un Breek"), or the diminutive, "An Bricin" (Breekeen, or little Trout). This name is used commonly in the west of Ireland, and Donegal, most particularly in the Gaeltacht areas. Confusion may arise, as these names are also commonly (and correctly) applied to Lake-dwelling Trout, but it is important to remember that both are specifically Salmo Trutta, and differ only by race and habitat.

River Brown Trout occur naturally throughout Europe and elsewhere, wherever a watercourse is available and whenever that watercourse, be it a tiny stream or a major river, has suitable, clean water, together with upstream gravel beds, where the fish can spawn. Trout spawn in a similar manner to Atlantic Salmon and indeed wherever Salmon occur in a river, considerable competition will take place between the two species for suitable "Redds", or spawning grounds. In the British Isles, river-dwelling Salmo Trutta range in size up to about 10lbs. in weight, depending on the size of their particular river, along with its water chemistry and quality, together with the feeding available. Their variation in body colour from river to river will also be affected by these factors: For example, Trout living in a clear-water, chalky river with a sandy bottom will develop yellowish, or golden bellies and more and larger red spots on their flanks than their much darker, black spotted fellows from a peat-stained, rocky mountain stream. All Salmonids have a "Chameleon-like" ability to adapt their colours to their surroundings, both specifically, and as individuals.

This capability is very marked in river Trout, and even individuals moving from one part of a river to another will quickly adapt their colouration and spot pattern to what amounts to a suitable camouflage pattern to match the environmental conditions. As juveniles, Brownies strongly resemble Salmon Parr (Salmo Salar) in appearance, with the characteristic "finger marks" present on both species. At spawning time, as with all Salmonids, Trout colours intensify, particularly among males. Another factor which affects size range and colour is the amount and type of "cover" present, both above and below the water level. River Trout need shade from the sun. Underwater cover, or "room to hide" is vitally important to Brownies, for these fish are strongly territorial and "need their space" in order to thrive. Relationships between individual Trout in a river or stream develop into a "pecking order", depending on size and individual level of aggression, and hence population densities, whether naturally occurring, or as a result of "stocking" by humankind are critical.

Thus, at all post-hatching stages of their lives, the fish need bottom cover, such as stones or weed growth, wherein they may establish the boundaries of their individual territories. These territories are, in effect, the Trout's "living space", and, once established, a fish will remain within it, provided that sufficient food for his needs presents itself, and provided that he is not displaced by:

Even in a healthy, balanced population, the individual boundaries will always be defended by their owners against both other Trout and other species. These boundaries between them will be in dispute for much of the time, particularly when food is scarce, and will be in a state of constant adjustment. If food becomes very scarce, or Trout population rises suddenly, for example by "stocking", the whole system may collapse, and Trout numbers within the watercourse will suffer significantly as a result. Casual, or uninformed overstocking by Man, however good his motives, is worse than under-stocking!

This "territoriality" which is strongly present in all Riverine Trout, (less so in most, though not all, of their lake-dwelling brothers) is one of the major factors which an angler needs to comprehend, in order to catch them! So strongly is this territorial system instilled in the race, that an experienced angler, who knows an individual river intimately, will tell us that he can take a good Trout from a particular location on one day, and then return to take another, of very similar size, a few days later! Another fish of similar size will have moved into the vacant premises!

In a sense, and again in contrast to many "Still water" Trout, Riverine Brownies are "static" in their choice of living area. They stay in one place, in an area where they do not need to expend their energy against the current, perhaps behind a rock or boulder, waiting for the movement of running water to bring a food item within their field of interest. They then dart out to capture and consume it, before returning once again to their "lair" to await the next item on the menu. Thus, if an angler sees a "rise" on the river, he knows that this has occurred within the territory of an individual Trout, and by presenting the correct fly, bait or lure within that area, he may catch (or at least hook!) that particular fish.

Brown Trout, Riverine or otherwise, have a wide range of food items available to them, including smaller fish, (even smaller Trout), worms, and insects and invertebrates of every kind. In fact, they will eat almost anything small enough to be eaten, with the possible exception of naturally growing vegetable matter. Thus, River Trout may be caught by the angler with worms, maggots, lures resembling small fish, or by using as bait various insects, whether real or imitation. They may also be caught on Salmon or Trout eggs, an option which, although very effective, is strictly illegal!

At any given time, or season, however, River Brownies show distinct preferences for, and concentrate upon, a particular type, or even species of food item, particularly insects.

To the would-be angler, therefore, and in particular to the Fly Fisherman, the most important of the Trout's food items are undoubtedly insects, including both the aquatic and the terrestrial (wind-blown) variety. It is, perhaps, worthwhile at this stage, to define and distinguish between these two varieties of insect life.

boatmen or whirligigs, or (b) one whose eggs are laid in or on water, who develops from egg to larva, and then to pupal stage, still in water, but finally emerges into the air above the water, as a winged insect, to mate, land on water, lay eggs and so begin the cycle again. Examples are Dragon Flies, Damsel Flies, Midges, Mosquitoes, Sedges (Caddis) and Duns (sometimes called Olives).

This last family, (the Ephemerides) includes the famous group known as May Flies. A terrestrial, or wind-blown insect, as the name suggests, is any land insect which has fallen, or been blown unto the water by the wind. One good example, which Trout favour greatly in late July and August is the Daddy-Long-Legs (Crane Fly). It would be quite impossible, within the scope of this article, to go into Riverine Entomology in any detail, even confined to those insects which feature on the menu of the Brown Trout.