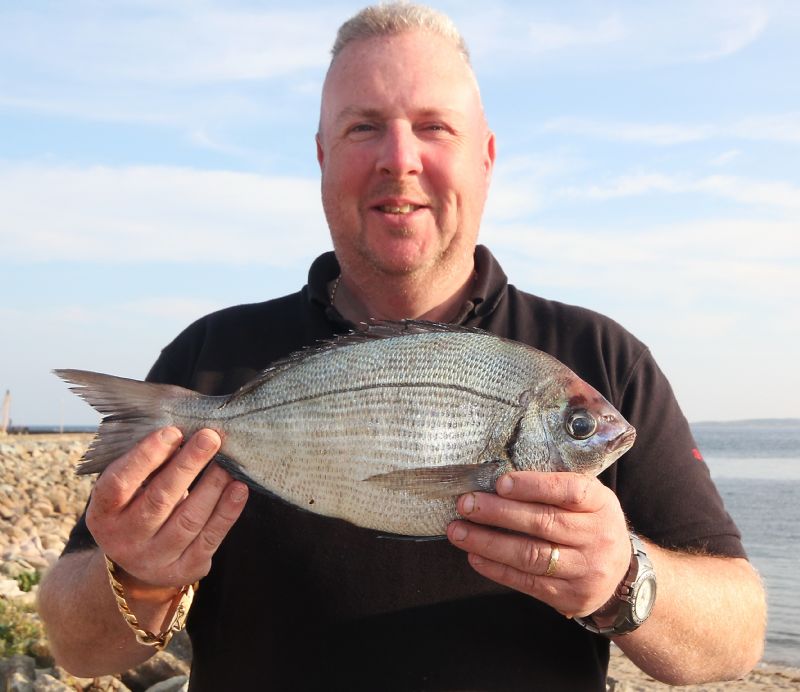 Young fish have silvery flanks with many pale broken lines along them and a wide dark band on the tail. Adults are usually 35 - 40 cm long, occasionally more. They are omnivorous, feeding on small crustaceans, shellfish and other invertebrates. They also feed on marine vegetation as well. Similar to Bass, be aware of sharp spines and gill covers when handling. 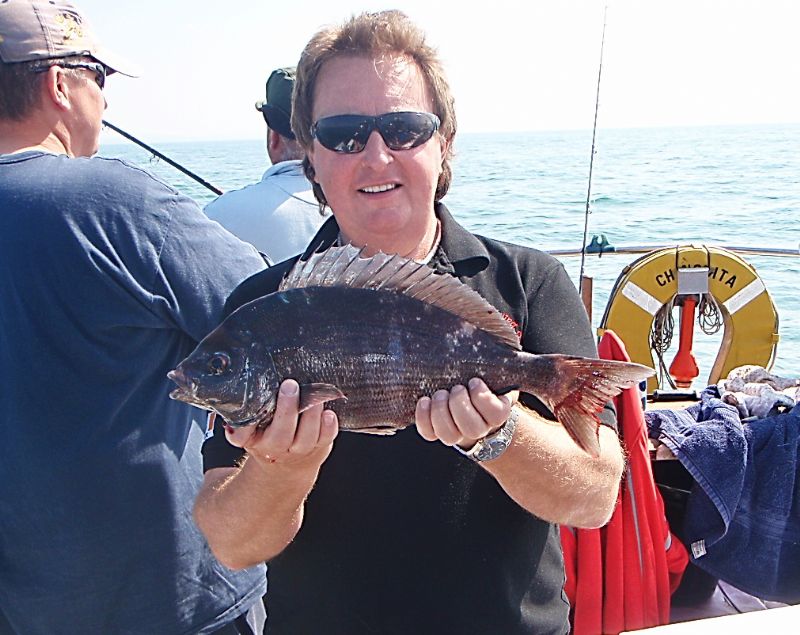 A warm water fish primarily found around the southern coast of the British Isles, although isolated populations can be found further north. Black Bream were considered rare around Britain and Ireland, but rising sea temperatures have seen numbers rise and it is now a reasonably common catch for many anglers throughout the warmer summer months. In Ireland, they show sporadically and quite locally from the south-eastern coast at Wicklow, down to Kilmore Quay and right around the south coast. They have been caught occasionally out of Killybegs on the west coast and known to have ben landed on the far north over wrecks out of Culdaff. Speak to charter skippers out of these ports and they may be able to put you over this species. 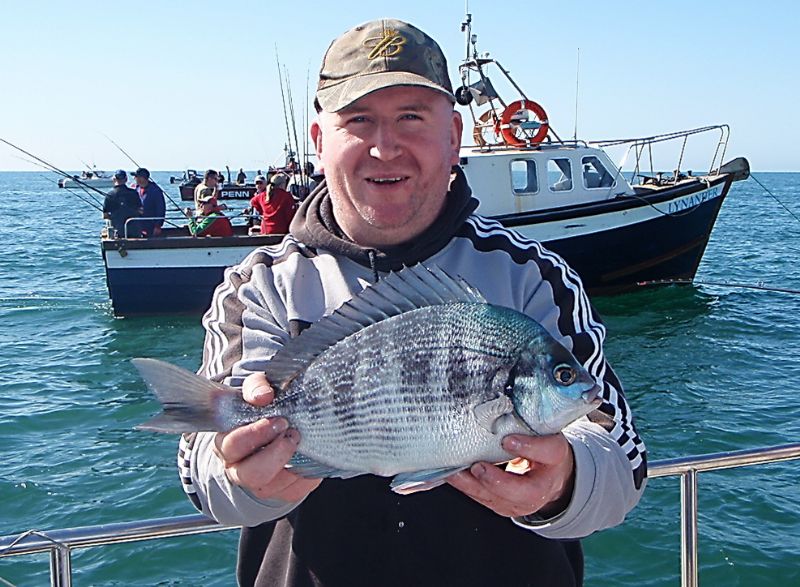 Like many other species, Black Bream head for deeper water through the winter months. The breeding season is in spring when the adults become noticeably darker. The male constructs a nest on the seabed to facilitate the eggs which he protects until they hatch. They are available to the angler once our seas have warmed sufficiently, realistically from the end of July through to late September. 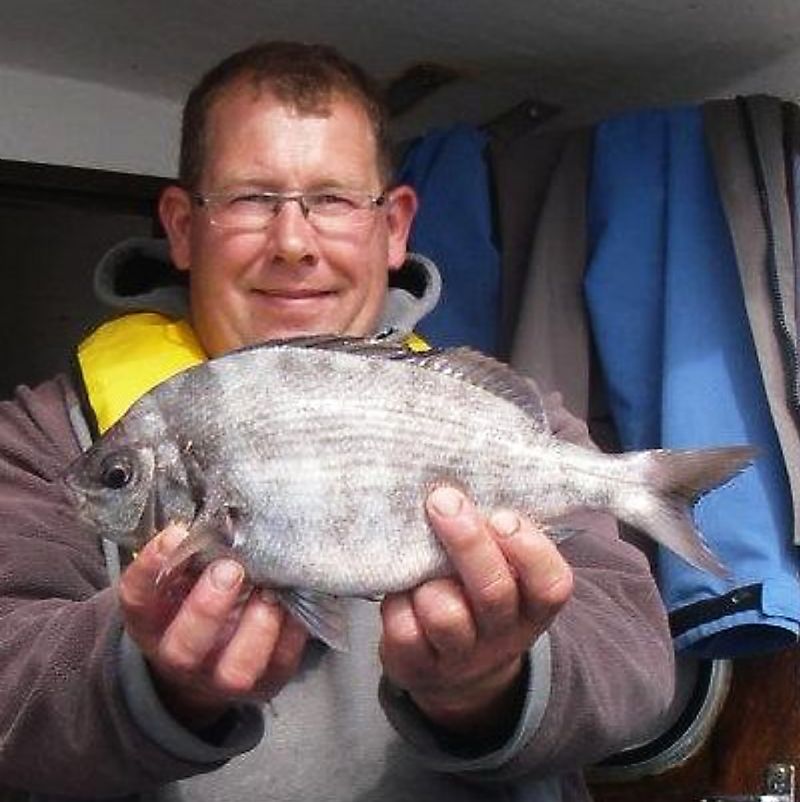 Thanks to David Mcormick for this image

Fish baits are far and away the best, such as Mackerel strip, thin strips of squid, and fillets of Sandeel or peeler crab. They have also been known to readily accept Lugworm and Ragworm baits. 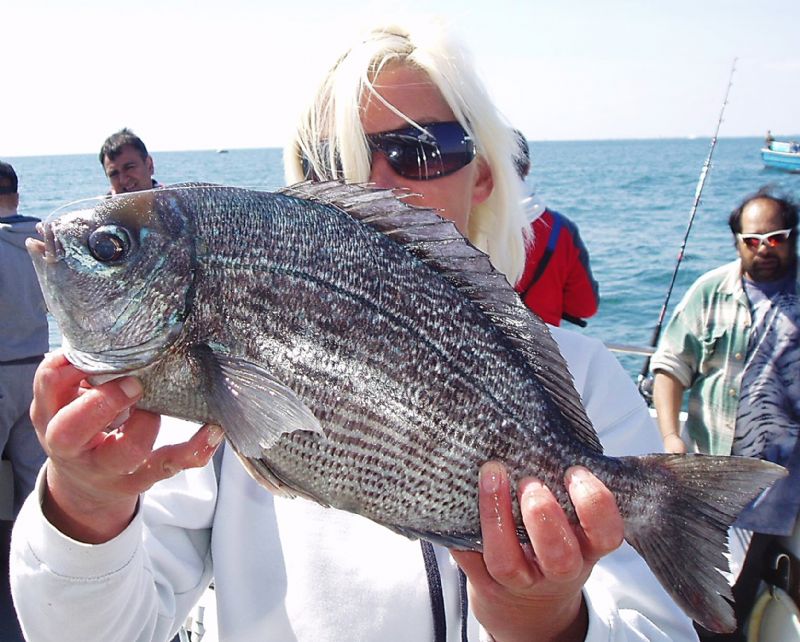 Thanks to Mick Mahoney for this spectacular photo

Black Bream can be targeted over sandy, mixed and reasonably rough ground, but have an attraction for features such as reefs, wrecks, weed growth and shellfish banks. Target these underwater features for greatest chance of success. Black Bream are fabulous fighters on light tackle, so balanced gear such as a 6-12lb class boat rod offer maximum sport. Use reasonably small hook patterns on a paternoster style set-up or even small Mackerel or Herring feather rigs. As this species feeds throughout the water column, they may also be targeted with float fishing tactics, altering the depth over known marks until contact is made. There is no need for complicated rigs and a two hook flapping rig is a good choice when fishing from the shore as it allows a different bait to be presented on each hook. 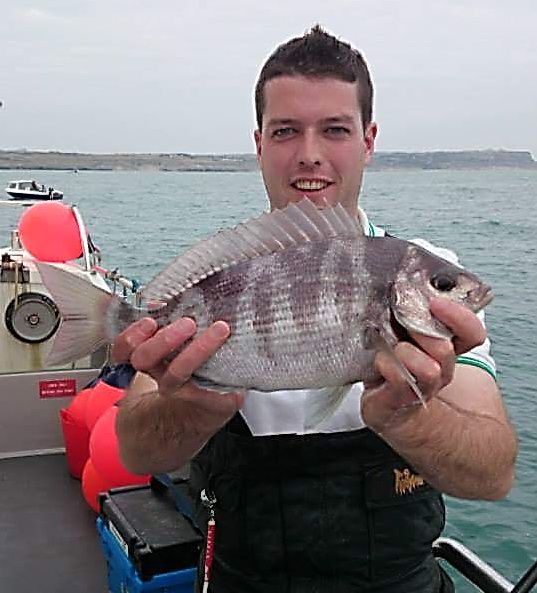 Angling Ireland would like to thank all those anglers that took the time to send in fabulous photographs of this species, namely Eddie Butler, Goldie Gordon, Padraic Clear, David McCormick, Liam O'Callaghan, mick Mahoney and Whelan Supplies that made this ID section possible.