Blues are probably one of the finest looking and easily recognisable sharks. They are sleek and stream-lined with large eyes and a long-pointed snout. The belly colour is a creamy-white, sometimes grey leading on to grey flanks and almost electric-cobalt blue. The back is darker blue. The dorsal is reasonably small, but the tail is long and sickle-shaped with a deep notch in the inside top edge. The pectorals are very long, and there are five gill slits on each side of the head. 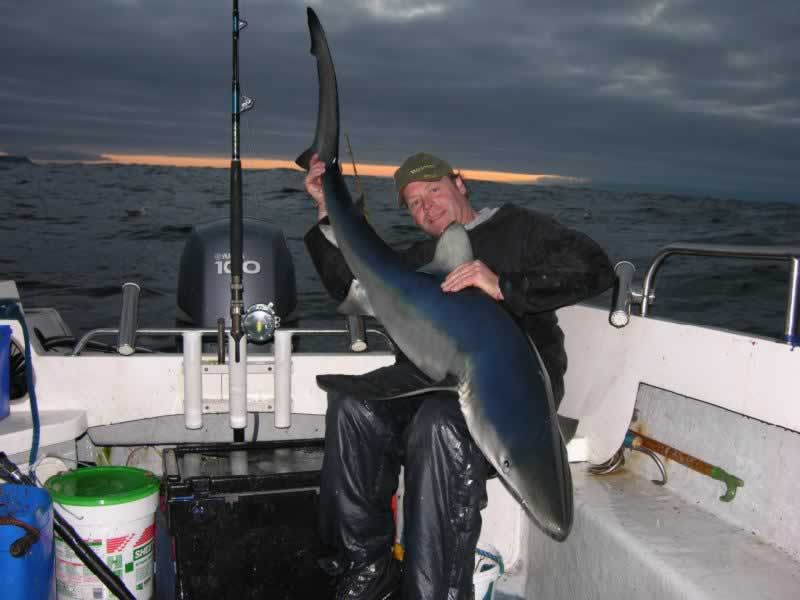 This 100lb'er taken out of Downings, Donegal

Blue Shark are found around the South, West and North of Ireland, and tend to frequent deeper waters favouring and feeding in depths of 150-250 feet, although most hunt in the upper water columns. Downings, Port-na-blagh and beyond the mouth of Lough Swilly are very popular shark waters in North Donegal, and the Killybegs area of West Donegal produces good fish also. The Cork coastline has seen many large Blue Sharks with harbours such as Courtmacsherry, Crosshaven, Kinsale and East ferry all recording many specimens over the years. Ports out of Galway and Clare also offer fantastic shark angling. When the Irish Specimen Fish committee eventually accept length-based measurements for large sharks, we will see many more fish reported, as most anglers refuse to weigh fish on shore. 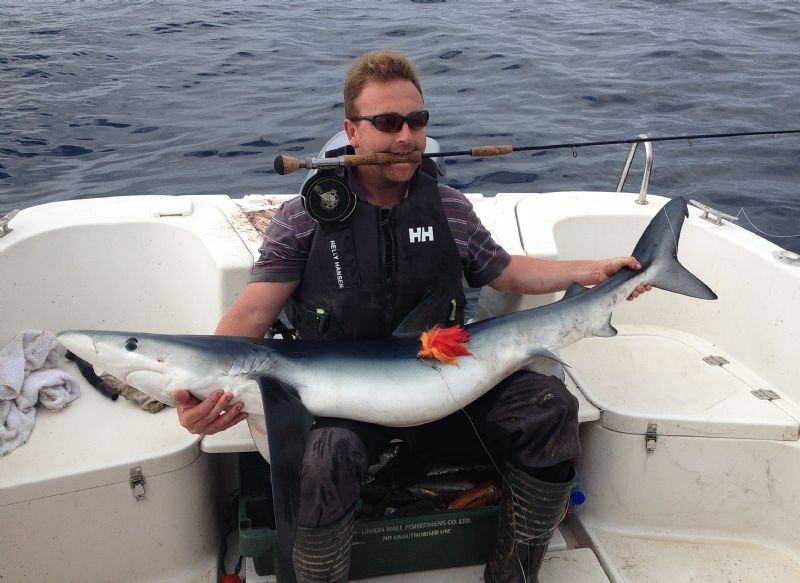 When the sea temperatures begin to rise around the Irish coast and the vast shoals of Mackerel arrive, this is the time to start targeting Blue shark. Although the south coast will sometimes see shark quite early in the year, in general, July would usually be the earliest, but August through to the end of September and sometimes into October, are definitely the peak months for this species. Blues arrive a little later on the north coast, but can experience excellent shark angling with some very large specimens landed. 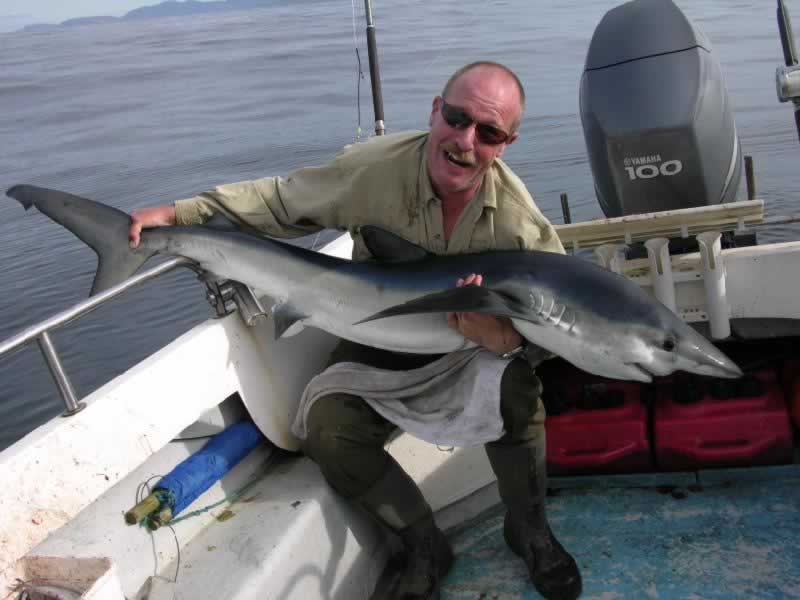 There is basically one bait that out-fishes all others and that is fresh Mackerel, either whole, cut as a flapper, or doubled-up. This is really the only bait to use for a successful days sharking unless Mackerel are in short supply. Blues will take other fish baits but Mackerel is best. Generally speaking the fresher the bait, the better your chances are of finding fish and getting a “hook-up”. 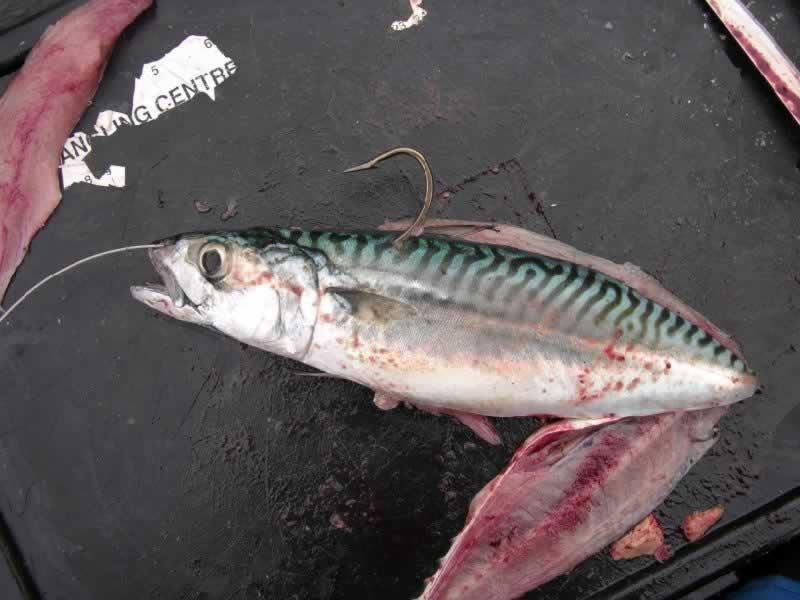 A 30lb class rod and a reel capable of holding 500 yards of 50lb nylon should land almost any Blue shark encountered. A whole Mackerel is suspended at a given depth below a float (usually made from a small balloon) and allowed to drift away from the boat. To attract sharks to the bait it is necessary to hang onion bags filled with mashed Mackerel, bran and fish-oil over the side of the boat, this is known as "Rubby -dubby" or "Chum". 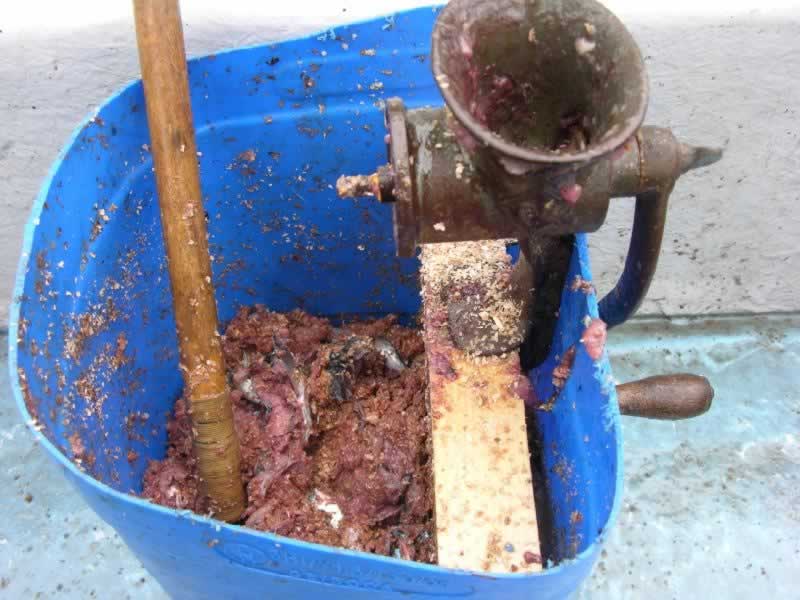 This scent trail will create an oily slick which tempts these large predators to home-in to the source for a closer look. A suitable wire biting trace must be used, coupled with a bronze hook around 8/0 to 10/0. As with any sea fish, if a hook has to be left in a fish, bronze will rust away quite quickly, hopefully causing no adverse affects. Remember to use at least twelve feet of 200lb rubbing line as a safety margin. This prevents the trace from snapping if the shark brushes against the hook length or rolls on the line on the surface.

Want to read an article on Shark angling in Ireland? Click here

If you wish to find the weight of a Shark this formula is recommended by the International Game Fish Association.

The formula is applied by measuring the girth of the fish at its greatest width in inches. This number is then squared. This figure is multiplied by the length of the shark from the tip of its nose, to the crotch of its tail, again in inches. The resulting figure is then divided by 800 to give the weight of the Shark in pounds (lbs.).