The Thick-Lipped Grey Mullet is a shoaling fish and is the largest and most common species of Mullet in Irish waters. The flanks are silver in colour leading to white or cream under-side with black back. It has two dorsal fins; the first is situated in the middle of the back and the second towards the tail and directly over the anal fin. The body is torpedo shaped with a series of black lines running horizontally along the flanks from the gill covers to the tail. It has, as the name implies, an exaggerated, hard top lip, covered in small nodules for scraping algae off rocks and other surfaces. The bottom lip has a groove that helps gather small food particles from the mud and sediment. The tail fin is large and forked. 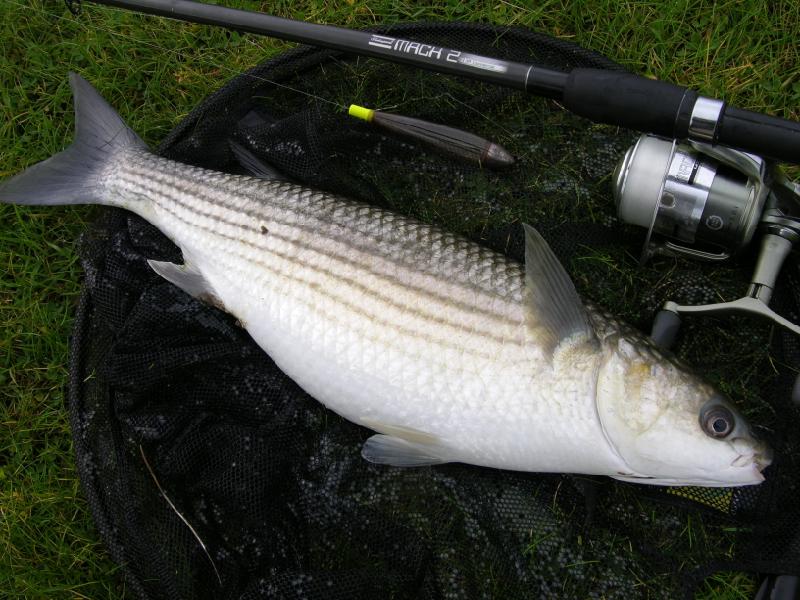 Mullet are prolific all around Ireland in shoals ranging from three or four fish to several hundred. They enjoy calm, warmer waters and in the colder climate of Northern Ireland, are often found around the hot-water outfalls of power stations. They also seek out any fresh-water outlets and drainage pipes where algae grows abundantly. Another hot-spot is sheltered harbours, piers and pier stanchions, mooring buoys and moored boats where they happily feed on algae or sift through the mud in search of small marine life.

They will also actively feed on shrimp and fish fry, slamming into dense shoals of bait-fish, and picking up the wounded stragglers. It is also common knowledge that Mullet will congregate around the mouth of pipes and over-flows from any type of food producing factory, confidently feeding on whatever particles are on offer. If you are able to find such a hot-spot, a hook-up is guaranteed!

Notable areas that produce large specimens are Cork Harbour, Kinsale, the estuaries and lagoons of West Cork, most of the harbours from Dublin down to Wicklow, Arklow and further south. Most of our major Irish river systems that lead out into brackish estuaries have very good fish. Strangford Lough, County Down has recently produced some fine fish, mostly where many of its small river systems meet the shore. The Antrim Coast and associated harbours all contain large Mullet throughout the summer for those prepared to put the time in. Harbours and marinas such as Ballycastle, Dunseverick, Portrush and Portstewart. I have seen Mullet on many occasions that would smash the Irish Record, with fish well into double figures; the trick is trying to fool them into taking your baited hook. They reach that size for a reason! 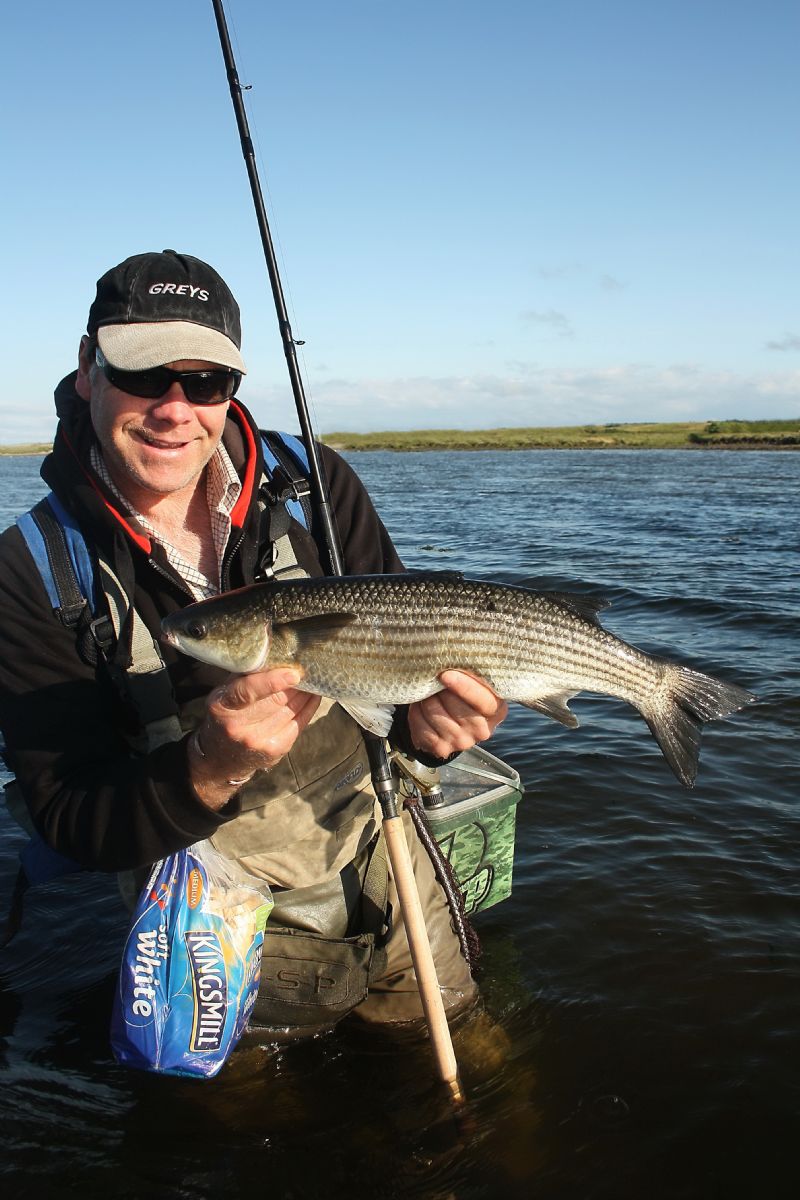 Grey Mullet prefer warmer sea temperatures and although fish are present in some areas throughout the colder months, spring will see the arrival of larger numbers. Mullet season is in full swing by summer-time and they remain with us until late autumn.

Grey Mullet feed mainly on small animal life while sifting through mud and silt; they also graze algae from rocks and pier stanchions, etc. They will congregate around man-made structures that provide a food source, e.g. Sewer outfalls, or factory overflows, river estuaries etc. However, they do not make specimen size from algae alone, and can be opportunistic feeders, taking advantage of a high-protein food source such as shrimp or fry when the occasion arises. I have witnessed Mullet gorging on fish fry, and when I realised this, caught numerous fish on small dead-baits that had washed ashore.

Pre-baiting works well for Mullet and once you have encouraged them to feed on the same bait being offered on the hook, the battle is won. Typical bait examples are mashed bread, sweet corn, harbour ragworm or small pieces of fish flesh and soft internal organs. 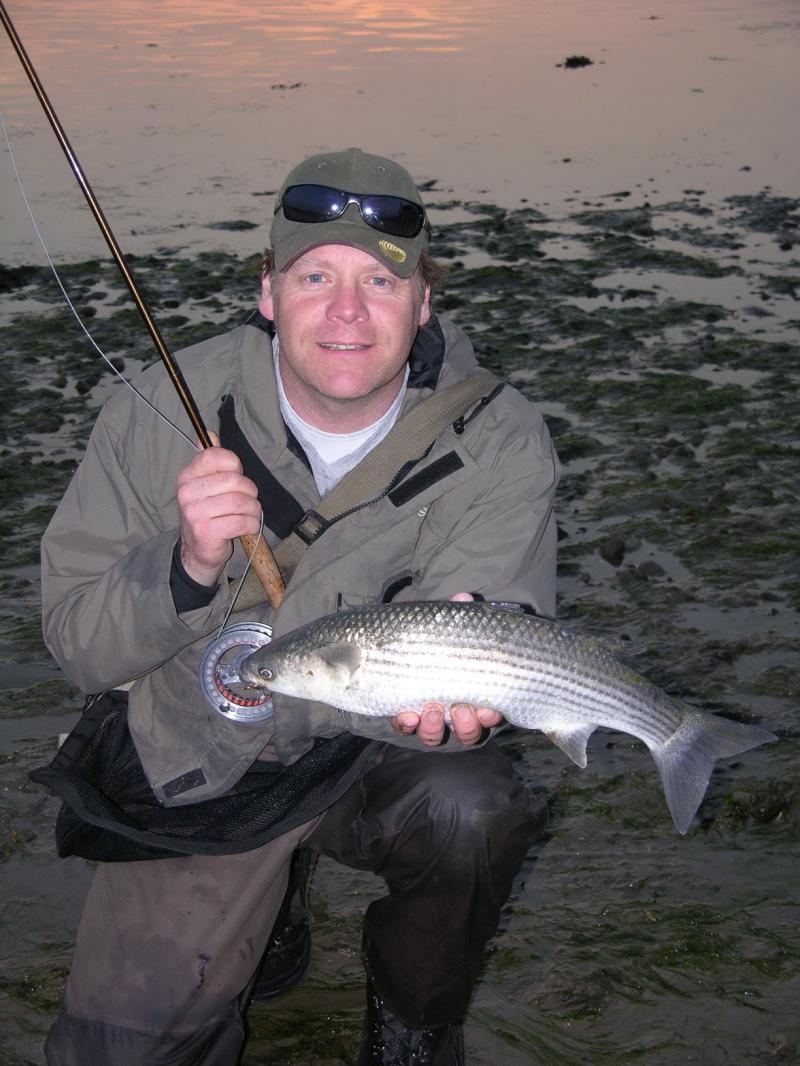 Although Mullet are extremely dogged fighters, basic freshwater match or quiver-tip tackle is ideal. A 12 - 13 foot float rod, matched with 6lb line should handle any Mullet you may encounter. Also many fish have been taken on the fly by anglers looking for brown trout or sea trout. This has led to the popular and ever-growing sport of specifically targeting Mullet on the fly. Usually a small black wet fly, a black dry fly or standard salmon shrimp patterns are successful. Hook sizes should be small from size 12-14 doubles or trebles. For bread and “maddies” etc, a strong, fine wire size 10 is ideal.